The jeweler is done with corporate life, and will now focus on returning to her roots instead. 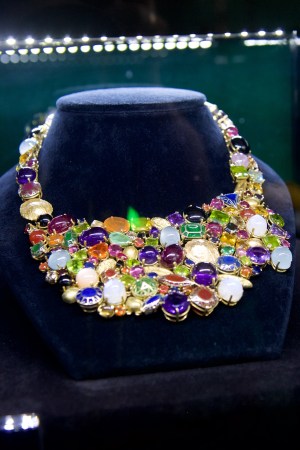 LONDON — Solange Azagury-Partridge is fashioning a new career, going back to her roots as a neighborhood designer-jeweler and resizing her retail presence to suit her new strategy.

Gone is the 5,000-square-foot flagship that she opened on Carlos Place in Mayfair in 2013 near to fellow London designers Roland Mouret, Roksanda, Christopher Kane and Nicholas Kirkwood.

In its place is a trinket-size space on a quiet street, two minutes’ walk from her Bayswater home. The 700-square-foot store is pure Solange — cool, vibrating with color and slightly off-kilter.

There’s no name above the door — just a white sign with the number 27, the Chilworth Street zip code and phone number written in black in the brand’s signature typeface. It’s the only shop on the upscale residential street, not counting the newsagent’s.

“Carlos Place was always too big, quite honestly. It was a very beautiful location, and when I took it I was still thinking that I needed to be in a certain area, to do things a certain way,” said the designer, sitting on an emerald-green velvet sofa in her new surroundings.

“It’s taken me three years to realize that it was a waste of space. It was just too much. The idea now is to just concentrate on what’s important: My jewelry, my clients, my life, my friends and my family. And it’s lovely, it’s like a breath of fresh air.”

Her career arc has traced that of the luxury-goods industry over the past two decades. She went from designer-jeweler with a tiny, boudoirlike shop in Notting Hill — which bore many of the traits of her new store, being set in a mainly residential neighborhood and with a vibrant red interior — to creative director for Boucheron, having been tapped for that post by Tom Ford, who was then co-leading Gucci Group, now part of Kering.

In 2008, she sold her brand to luxury conglomerate Labelux, which embarked on a major retail rollout with the vision of turning her small, design-led label into a mega-brand – which was never going to work. She bought back 100 percent of her business in 2012, and has since set about reshaping the brand to suit herself.

Azagury-Partridge’s move was part of a restructuring overall at Labelux, which has since sold all of its smaller brands to focus on the larger ones such as Jimmy Choo, Belstaff and Bally. It has restructured and is now known as JAB Holding Co.

She is now back where she started — only with a few more stores and the wisdom of 26 years in the industry. Similar to some of the trends emerging in luxury goods, she’s focused on the shop, the local customer and individuality.

The new, smaller store is just the beginning: When the lease on her 809 Madison Avenue unit in Manhattan runs out, she’ll probably swap that store for a showroom in New York. Her Paris unit, a small space near the Hôtel Costes, will remain open.

“Expansion didn’t work for me, and I’m not going to bother going down that route again. This is a way of making the business turn into a pleasure again. I’d lost the kind of joy in it for a bit,” said the designer.

“The thing I missed the most was being in my shop and interacting with my customers and designing. Half of my clients live around here and now I can just meet friends and clients in the area and work a bit from home. The business has just gone down to its pure, most basic form again, and it’s lovely.”

The London interiors have all the Azagury-Partridge markers — the jewel tones, stained-glass windows, dark wooden furniture and designs displayed under glass like an expansive Victorian butterfly collection.

Much of what’s in the shop is bespoke, although her evergreen and men’s collections are also on sale as are her two fragrances, Stoned and Cosmic, which were developed with Lyn Harris.

The walls are covered in emerald-green velvet, matching the high-back sofas, while the green and red mirror frames are faceted like jewels, and a chandelier shaped like a glossy gift bow hangs from the ceiling.

The neon “f— o–” sign from her former shop is there, too, done in handwriting similar to the gold name and message rings for which she’s known.

The designer has made other changes, too. She’s running with social media, engaging with clients and discussing orders over Instagram. She has a web site, but not e-commerce. “It’s not that kind of price point. It’s there, and if someone is interested, we end up having a conversation with them,” she said of the products on the site.

She’s also finished with silver and with wholesale, except for a deal she has with Amazon.co.uk.

As reported last fall, Azagury-Partridge launched a version of her best-selling Hot Lips ring in sterling silver and enamel that costs 69 pounds, or $91 at current exchange. The original, an 18-karat gold-filled one that is slightly larger, was introduced in 1995. She’s no stranger to mass production or the high street, having done one-off collections in the past with Topshop and Hennes & Mauritz.

She also sells a selection of high and lower-priced pieces on Amazon.co.uk, ranging from her Vices and Virtues Ring in 18-karat yellow gold and diamonds that costs 18,500 pounds, or $24,270, and colored silver lacquer charms on chains for 480 pounds, or $630. There is also a white gold and amethyst Hot Lips ring that sells for 6,500 pounds, or $8,530.

Ask her about business projections, and she’s not interested.

“I just don’t want to think about money anymore. I’ve had enough of it. All I’ve been doing for the past 10 years is thinking about money, and it’s the most bloody boring thing. I mean, obviously, the business needs to work on some level, but beyond that, it’s not my motivation.”

According to the latest accounts filed at Companies House, the official register of U.K. businesses, the brand is classified as a small business, and it does not have to publish a balance sheet. A small business is defined as one that does not have a turnover of more than 6.5 million pounds, or $8.5 million.

Azagury-Partridge’s change of heart — and direction — has also dovetailed with the explosion of fine and designer jewelry, due to the Internet and to the rise of gold vermeil casings for sterling silver. The latter technique has allowed designers and entrepreneurs to create expensive-looking jewelry for a fraction of the price.

“I think jewelry is as important as fashion these days, as important as shoes and bags. It’s got that fashion rhythm to it, too, and that becomes about production and distribution, rather than about the art of jewelry,” said Azagury-Partridge.

“I can’t compete on so many levels, and it’s not my motivation. It’s better to just keep it close, keep it small and keep it fresh and exciting for me. If I’m not excited about what I do, then nobody’s going to be excited,” she said.

Azagury-Partridge is not alone. As reported, her friend and fellow jeweler Stephen Webster swapped his shop on Mount Street for a second-floor showroom and salon a few doors down. Webster, who is also chairman of the jeweler Garrard, told WWD that his brand is doing well with outlets such as Net-a-porter and its own e-commerce.

“People will come in if they want to have a consultation with me or one of my team because they feel really comfortable,” Webster told WWD in May.

Azagury-Partridge said a business she admires is Codognato in Venice, a family-run jeweler that’s been around since 1866 and keeps eccentric hours. Famous for its skull and coffin rings, the wood-fronted shop is located near San Marco. She also counts the jeweler Joel Arthur Rosenthal, known as JAR, as an inspiration “because he basically does in life as he pleases.”

Like Rosenthal, Azagury-Partridge has certainly made her name as an artist-jeweler outside the commercial realm: She was nominated in 2003 for the London Design Museum’s Designer of the Year award, and is one of a handful of contemporary jewelers whose work is exhibited in the Musée des Arts Décoratifs du Louvre and at London’s Victoria & Albert Museum.

Looking ahead, she’s begun work on a small collection that will come out in time for Christmas, and it’s likely she’ll try to enlarge the shop on Chilworth Street, too, taking over a nearby space. But she still wants to keep it a discreet.

“Some people don’t even call, they just turn up, they’re just finding me. It’s great,” she said.