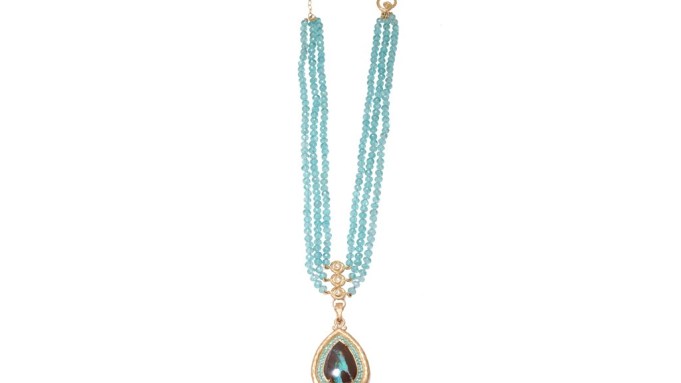 Everyday jewelry has long since become the term for pieces that, while precious, can be worn day to night, seven days a week. On the other end of the spectrum, more ornate statement jewels are generally reserved for special occasions.

Lately, designers seem to be blurring the lines with versatile pieces that actually transform from one thing into another. Whether the duality is by design or a happy accident varies, but in the era of added value, jewelry lovers are getting more bang for their buck.

For Los Angeles-based Erica Courtney, a client’s feedback prompted her to design earrings with removable drops and dangles.

“One of my customers once said, ‘I wish this would come off so I can just wear it plain,’ so I went back and redid them all,” Courtney said of her jeweled drop hoops and pendants. “I love showing clients different ways a piece can be worn and how to mix new pieces with those they already have.”

Pamela Froman designed her stud earrings with removable and interchangeable drops as a way to keep her children from pulling off her earrings. “From there, I started doing necklaces with reversible, detachable pendants and offering a range of stones that women could collect,” she said.

Several earrings, such as those by Victor Velyan, Phillips House, Vanessa Leu, Nam Cho and Temple St. Clair, come with smaller studs, discs or flowers, to which the wearer can attach one or multiple drops or wear alone. Sorellina’s Axl Serpente Tassel earrings and Fernando Jorge’s wire and gemstone drops both loop up and fasten in the back to transform from danglers to hoops.

“These were truly designed with that in mind,” said Kim Carosella, who owns Sorellina with her sister, Nicole. “We love the idea of a woman who is an urban juggler. She may wear the hoop to the office and then take it down to a tassel for nighttime.”

The idea of convertible jewelry isn’t new. Victorian-era pendants converted into brooches and necklaces doubled as tiaras. Going back even further, an ancient Turkish piece inspired Myriam Gumuchian’s Daisy Ring Cycle ring for Gumuchian. “I can’t take credit for the idea, but we did revamp it,” she said of the stacked ring that unfolds to become a bracelet. The rings are available in yellow, white and rose gold with varying degrees of diamonds and range in price from $4,400 to $8,000 retail. Gumuchian intends to expand on her original design, which features a daisy on top of the ring and thus in the center of the bracelet, by adding other floral and animal motifs.

Marco Bicego has long designed necklaces that can be worn as different lengths, styles or as bracelets.

“I do necklaces at varying lengths so it gives the customer the creative freedom to style it in her own way. That definitely will change based on her mood or where she is wearing the jewelry,” he said.

With gold prices still high, and consumers giving more thought to investment pieces, the trend doesn’t seem to be abating.

“Women today are looking for an inherent value in their jewelry; they may buy a necklace that can be short or long, and it makes them feel that there is an increased longevity with the piece,” said Moise Cohen, president of Marco Bicego, North America. “Instead of one long necklace, you now have two different bibs, two bracelets and two lariats.”

For Clara Williams, a former technology executive who embarked on a jewelry career after the dot-com bubble burst, it was on the advice of retailer Mary Gushee, owner of Mildred Hoit boutique in Palm Beach, Fla., that she formed her namesake company with a focus on versatility.

“People enjoy investing in the components and they don’t just buy one piece. They might love having a wacky combination but they don’t want it to be permanent,” she said of her various necklaces, such as the dusted gold leather choker for $425, which have magnetic closures that attach to various centerpieces, ranging from Italian glass, sleeping beauty turquoise and amethyst druze to unpolished rose quartz.

“Part of what makes this successful is that women today aren’t wearing fancy jewels all the time. Also, they want their personal style to come through in their jewelry, and this way they get to be part of the design process,” said Williams.

Some designers, such as London-based Melanie Georgacopoulos, like to push the creative envelope even further. Her pieces are made from thousands of pearls strung together with metal wire to form large, almost fabric-like squares. These can be worn draped over the chest and back like a bib or wrapped around the neck like a scarf.

“I used to be a sculptor, so I’m interested in the idea of jewelry as an art object when it’s not being worn, and in order to wear it, you must also change its shape,” she said.

London jeweler Tomasz Donocik designed his one-of-a-kind dragonfly ring with playfulness and artistry in mind. As part of his Four Elements collection, the ring was meant to embody both water and air. The center ring, made from palladium and green beryl, detaches from the intricate outer ring made from emeralds and diamonds.

“I love seeing the surprise on people’s faces when they see it come apart,” he said. “It also takes skill as a designer and it’s more of a challenge than whacking out something simple.

“This versatility was present 100 years ago but was forgotten for the past couple of decades,” added Donocik. “I think it’s coming back as people are enjoying getting more out of a product they’re buying.”