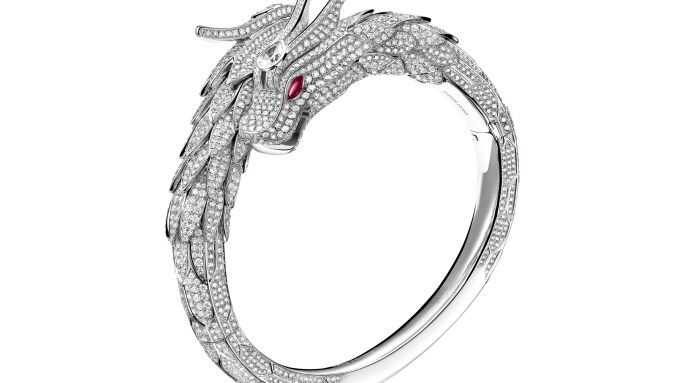 Designer: Dennis Chan
Founded: 2004
Specialty: Contemporary jewelry using symbols from Chinese mythology.
Backstory: Asian customers like to wear talismans and amulets as lucky charms, which is why, said Chan, “many of our existing collections capture emotions and spirituality in Chinese mythology. Customers like to express their love and admiration through symbolic jewelry with meaning and stories behind it.” Chan also draws inspiration from Western places, as he was brought up in Hong Kong (where he is now based) but educated in London. For example, the Bo Bo collection, though inspired by the panda, takes the form of a teddy bear, and the Roobot collection is inspired by vintage robot toys. Kering acquired a majority stake in the brand in 2012. Retail prices range from $2,000 to $40,000.

Designer: Reem Mobassaleh
Founded: 2015
Specialty: Modular fine jewelry with unique and customizable features.
Backstory: The brand officially launches at Couture with three collections — Diamond Digit, Purely Portmanteau and RYM Essentials. The Dubai-based Mobassaleh earned her B.A. at Brown University and M.B.A. at Columbia Business School, after which she worked in the technology development sector focused on computer microchip manufacturing. In 2009, she began to cultivate design interests in modular jewelry that became RYM. Her first piece paired an emerald bought on a trip to Colombia with a sapphire sourced in Sri Lanka that became the collection’s blueprint, many of which can be combined and transformed into rings, earrings, necklaces and cuffs. Retail prices range from $220 to $19,500.

Designer: Neha Dani
Founded: 2015
Specialty: One-of-a-kind jewelry made with 18-karat gold, rare and exceptional colorless and fancy-colored diamonds and gemstones.
Backstory: Dani’s high jewelry collection includes miniature sculptures made from individually carved wax models. Forms may appear abstract, but themes of nature and human emotions permeate each piece. New for 2016 is the sea-inspired Cadence collection, in custom-colored, rhodium-finished 18-karat gold, gemstones and diamonds, echoing swaying ocean algae, coral and plants. New Delhi-based Dani, a Fellow of the Gemmological Association of England and a Gemological Institute of America certified Graduate Gemologist, was a Rising Star at JCK Las Vegas 2015, and this year marks her debut at Couture. Retail prices range from $17,000 to $150,000 and up.

Designer: Argun Dagcinar, lead jewelry designer
Founded: 2007
Specialty: Contemporary high jewelry inspired by ancient Anatolian civilizations.
Backstory: The Istanbul-based brand, comprising jewelry, clothing and home goods, was founded by the Ayasli family, which has a long history of creating handcrafted fine jewelry. The brand works in its patented 18-karat gold color, a combination of rose and yellow golds with diamonds and precious stones. Armaggan’s newest Flora and Fauna collection is inspired by animals and flowers exclusive to the city of Anatolia, with other Turkish motifs. Distribution has been exclusive to Turkey, but Armaggan’s Couture debut is part of an international expansion plan. Retail prices range from $20,000 to $30,000 for high jewelry with some pieces in the $500,000-to-$600,000 range.