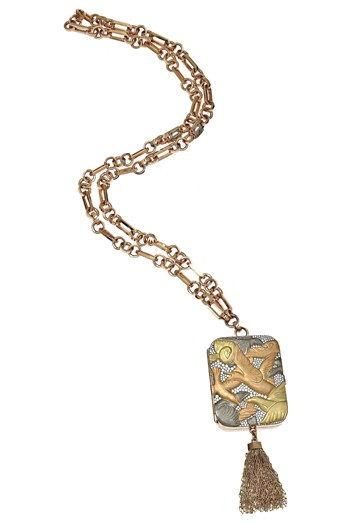 Backstory: By launching her first jewelry collection for spring, Kim Kaufman has finally gone back to her artistic roots. The Miami native, who’s now based in Rye, N.Y., received her MFA in sculpture from Maryland Institute College of Art in 1994. After graduation, though, she opted for the corporate world — “I had to make money after school,” she explains — working at firms such as Young & Rubicam and Fitz & Co. By 2000, however, Kaufman had become a full-time mother. “I didn’t have that creative outlet,” she says. “And I thought this [collection] would be a great way to do sculpture on a small scale — one that’s conducive to having children and living in the suburbs.”

Collection: “I want to be the Fabergé of the locket world,” she says. “The lockets out there, they’re very traditional-looking. This is about a piece of art that’s wearable.” And, indeed, although her pendants have an Old-World air, they’re also bold, with a slight downtown vibe. “You can easily wear them with a pair of jeans,” says Kaufman, whose keepsakes are crafted from a mix of rose, yellow and white gold and accented with precious stones. Themes include Japanese cranes in flight, inspired by a carved box from the Edo period, and geometric patterns taken from a church floor in Venice. Kaufman credits her father for her long-standing locket love and, specifically, an old Native American version — bought at a Florida flea market 20 years ago — that she inherited from him.

Stats: Retail prices for the limited edition collection start at $65,000. In November, Kaufman will launch a second line of smaller 18-karat yellow gold lockets, priced from $18,000 to $22,000 at retail.

Backstory: Ward Kelvin took a surprising route into the jewelry world: His first job after graduating from Pratt Institute in the late Eighties was designing toys. “I did the [McDonald’s] Happy Meal boxes,” says Kelvin. “I did toys for ‘The Simpsons,’ Pee-wee Herman and ‘The Flintstones.’ I worked for Hanna-Barbera, as well.” From there, Kelvin went on to design trophies at Tiffany & Co., then spent 10 years doing tabletop products and silver jewelry there. His résumé also includes positions at Estée Lauder (makeup packaging); Polo Ralph Lauren (leather goods, home), and David Yurman (design and product development). “There’s an illustrative quality to everything I do,” says the Long Island native. “My pieces are decorative in a graphic way — and, funnily enough, designing a china pattern and designing jewelry relates.”

Collection: Kelvin calls his line American Chinoise, noting that it’s influenced by Thirties Hollywood Regency style. “I love home design, and this collection is really a response to my interest in that era,” says Kelvin, who cites interior decorator Frances Elkins as a major design inspiration. The debut lineup features cocktail rings in the shape of bamboo stems as well as a number of open latticework pieces — the plumelike gold, diamond and Mali garnet earrings, for instance. The latter, Kelvin notes, was a recession-friendly move, as is his use of recycled 18-karat gold. “I’m creating big, bold looks with an economy of material,” he says. But he is also honoring his toy-making roots with whimsical pieces such as a lariat necklace featuring a gold monkey swinging from vinelike green and champagne quartz strands.

Stats: The collection retails from $3,000 to $8,000 and will be available exclusively at Bergdorf Goodman.

Backstory: The name Pepito Albert may ring a bell for fashion veterans. In 1986, as a graduate of L.A.’s Fashion Institute of Design & Merchandising, Albert launched an eponymous ready-to-wear line that was sold at department stores nationwide. “It was very architectural and geometric, lots of clean lines, narrow silhouettes,” the designer says. In 1992, he closed his label and moved back to his native Philippines, where he started a made-to-order business. In the past five years, however, he has phased that out and begun dabbling in accessories. Spring 2010 marks his first complete jewelry collection.

Collection: XVIA3 is inspired by the cross-cultural strains of Albert’s homeland. “I’ve always been fascinated by traditional Filipino jewelry,” he says. “The style is a bit tribal, but also very influenced by Spanish jewelry.” What stands out is the line’s artisanal feel; shapes are asymmetric, while edges are rough and uneven. The fact that the collection is made from 24k yellow gold-dipped silver only adds to the handcrafted feel. “I like to create a slight offness,” says Albert, who also references classic Filipino motifs, from the national sampaguita flower to the pabitin, a piñatalike toy for children.

Stats: Wholesale prices for the collection range from $620 for a pair of earrings to $6,360 for a snakeskin necklace accented with chunky blue quartz stones and gold beading.