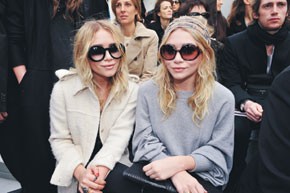 Mary-Kate and Ashley Olsen soon might not be wearing anyone but themselves.

The diminutive Olsen twins have created a fashion jewelry collection through a licensing partnership with Robert Lee Morris under the brand Elizabeth and James, their contemporary apparel label that is sold in more than 250 doors globally.

Given their well-known propensity for partying and being photographed by the paparazzi, the Olsens could turn out to be one of the best self-promoters in the fashion game. With one photograph, they have been able to catapult a no-name handbag into must-have status, or send groups of women rushing to find that perfect platform boot. While some of their wardrobe choices have been derided — from the blanketed hobo shrouds to their Goth, vampy ensembles — like it or not, the 22-year-old twins are fixtures in fashion front rows from Paris to New York, despite some of their personal problems.

“We’ve always done our own thing and sometimes people appreciate it or they don’t, or it’s shocking or it’s not,” said Ashley, who the night before being interviewed appeared in New York at the Council of Fashion Designers of America Fashion Awards draped in an oversize black Calvin Klein Collection suit. “We don’t follow the trends of other people. We’ve never had stylists, we do our own thing. So when you find individuals like that, especially in the fashion industry, people pay attention. Whether they agree with it or not is a different story.”

The Olsens are expanding their design activities, which shouldn’t be a surprise since the two already have a significant merchandising and branding business that, in the past, has been estimated at about $1 billion. Along with Dualstar Entertainment Group, which has managed their brand for 17 years, they’ve gone from selling DVDs at Wal-Mart to $600 skirts at Barneys New York from their new high-end ready-to-wear label, the Row.

“We both have a love for accessories and they’ve always been important to us from Day One,” Mary-Kate said. “They can help make an outfit or make you feel different. Maybe a ring brings you good luck, or you got it as a present and it means so much to you. It’s a feeling that you get when you put on something that is special.”

The twins were attracted to Morris at last year’s CFDA Fashion Awards when the designer received the Geoffrey Beene Lifetime Achievement Award.

“They put together this video of him and I was so moved,” Ashley said. “He is so talented and we thought, how great would it be to one day do a collaboration with him. We were also thinking about what would be a great next collection to introduce for Elizabeth and James that would be appropriate, and jewelry was the first thing that came to mind. So we called Robert right away and he said, ‘Of course.'”

Hitting stores in September, Robert Lee Morris for Elizabeth and James consists of 80-plus styles, including thick metal cuffs and rings, earrings and necklaces accented with turquoise beading, crosses and daggers. The collection is meant to be mixed and matched and retails from $65 to $700.

“We liked the idea of having playful elements along with timeless and ageless pieces,” Ashley said. “The symbols are attachable and you can take the jewelry and make it your own. There are solid silver and gold pieces to wear forever and comfort pieces that you’ll put on and wear everywhere.”

As for Morris, whose career creating architectural jewelry for everyone from Calvin Klein and Donna Karan to Karl Lagerfeld has spanned 40 years, he said, “There was this synthesis of what they both wanted and what we all felt was a great representation of their iconic image and my iconic image. So then we had design development meetings in my studio and it just got more and more exciting. They were very involved in every aspect of the collection, which was very gratifying. It wasn’t just me doing something and them accepting it. It was real teamwork.”

Mary-Kate said, “Going to Robert’s studio was like being at a museum and a playroom to play dress up. When we first went there, it was hard to have a straight conversation. We’d go in and put on couture pieces like headdresses or helmets he used for a fashion show. He had all of these masks that were amazing and so inspiring for our collection.”

The collection will make its debut at Intermix stores nationwide, as well as at Holt Renfrew in Canada and Asia’s Lane Crawford and On Pedder. And while some industry observers remain skeptical, Morris said retailers were enthusiastic, given the Olsens’ “credibility in the fashion industry.”

In true Olsen style, bags and shoes could soon follow.

“We started doing this kind of work when we were 12,” Ashley said. “We really were — for the tween market — the first to bring licensing and to create a brand. There are so many opportunities out there, but it’s important that whatever the lines may be, there’s quality to them. We have complete control over our quality, and licensing is about having the right partner and trusting each other.”