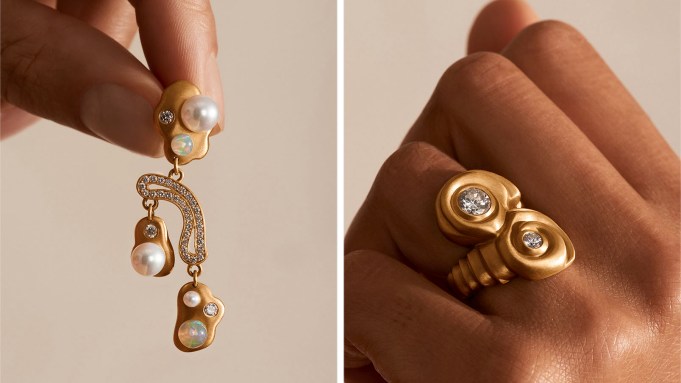 Jo Riis-Hansen is bringing a certain thoughtfulness to jewelry design, approaching her work as a tranquil, sculptural practice.

More artful pursuit than consumerist endeavor, Riis-Hansen is diverging from fashion systems that encourage needless consumption. For this, she has decided to sell her jewelry through an art gallery rather than a store.

Etage Projects — a renowned Danish gallery that deals in art exploring various notions of function and shows at global fairs like Design Miami — will step into the merchant role. Riis-Hansen hopes this method of commerce will attract a slower consumer that makes well-considered purchases.

The designer — a trained metalsmith — began her career in costume jewelry in the early 2000s, but departed the category in 2016 feeling that, “it sucked me dry — I needed to get back to the craft where I was the only one who did everything, where I put thought and spirituality and personality into the pieces.”

“For me, the process of creating jewelry is more artistic — it’s a big process. Everything goes so fast today and there is so much stuff in the world. I want to concentrate on consumers that, when they buy something, they think about how long they will have it for,” she added.

Riis-Hansen’s designs range in price from 15,000 Danish kroner to 50,000 Danish kroner — or about $2,300 to $7,650. Earrings — the designer’s specialty — are sold individually. “I think an earring can be more of an art object — you can shape an earring more easily,” she said of her attraction to the medium.

Riis-Hansen aims to expand upon her color theory, and hopes to add an interdisciplinary element to the line. “I would really like to work with other artists,” she said. “I was trained so correctly on how to do this craft, I have a lot of old weird rules with me. For my own sake, I need to explore the process and be freer in expressing myself.”