Ones to Watch: Couture Jewelry Show 2019

This year sees the show add 60 new brands to the mix, which includes several timepiece brands, as well as a handful of showrooms that have increased the number of brands represented at the show.

“We focus on quality over quantity,“ said Gannon Brousseau, senior vice president of Emerald Expositions and couture director when discussing the show’s growth over the years.

Attendance wise, the executive said, the show draws around 4,000, and that the only change he sees is some retailers may send a few less people than in years past.

“The magic is in the curation of it,” he explained of the show. “We are really careful on how big we get. We try and stay the same in terms of volume year after year. We grow maybe five exhibitors a year.”

Adding, “We work diligently to ensure that we partner with designers and brands with an unprecedented level of talent and prestige, as well as retailers who represent only the best of the best, and our attending media are among the most knowledgeable and engaged in this industry.”

While the show’s overall growth may be controlled, it does add a healthy number of new brands to the mix each year. This year sees the show add 60 new brands into the fold, which includes several timepiece names, as well as a handful of showrooms that have increased the number of brands represented at the show.

Here, WWD highlights a few of the show’s freshman class. 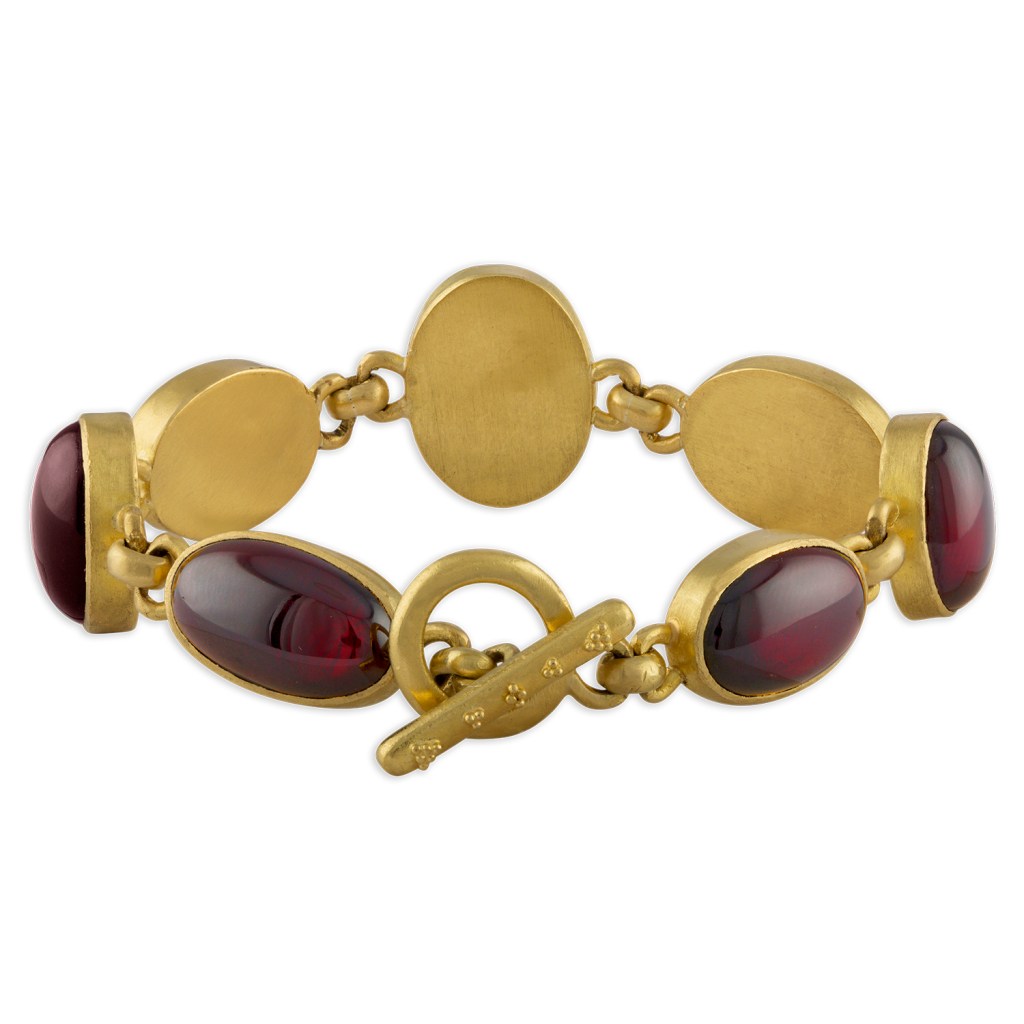 Designer Jean Prounis said her brand originates from her desire to pay homage to her Greek ancestry.

Prior to officially launching her own brand, she worked for several jewelry designers while making custom pieces for a few private clients.

“At night, I took ancient goldsmithing classes with master goldsmith Cecelia Bauer in her New York studio,” she said of her early days.

“When I first started ancient goldsmithing classes, I learned a breadth of techniques,” she said. “I began to play with the scale of intricate details commonly seen in ancient jewelry. I like to play with those delicate details in my designs by scaling up the fine details to create a bolder and more wearable piece.”

Prounis is coming to the show as a year-one member of the Couture Design Atelier program. The program is Couture’s way to highlight new talent and works as an incubator, of sorts.

“We give them three years to understand how the American market works, how retailers work and then hopefully they graduate to a proper salon,” Brousseau said of the program.

Prounis will showcase her permanent collection along with the latest chapter of jewels inspired by laurels.

“The laurel pieces were inspired by my recent trip to Greece to learn about my family’s heritage,” she said of her new chapter of the collection. “The Prounis family originated from a small village in Northern Greece, Metsovo. Laurel leaves were referred to in Ancient Greek mythology as symbols of protection, purification and poetry. In an effort to contemporize the laurel and its symbolic notions, I looked to the almond-shaped leaf’s silhouette when curved, as seen in our laurel hoops and with all of our pendant bails.”

Her materials play a core role in her work but she also makes sustainability a part of her ethos, incorporating recycled gold for the creation of her pieces.

“I am currently working toward building an entirely sustainable business. It has always been very important to me that I integrate responsibly sourced and produced materials,” she explained  “All of our gold is alloyed from recycled materials and the entire collection is handmade in New York City.”

Her pieces range in price from $280 to $30,000 and are currently stocked at Bergdorf Goodman, Dover Street Market, Moda Operandi and Catbird. 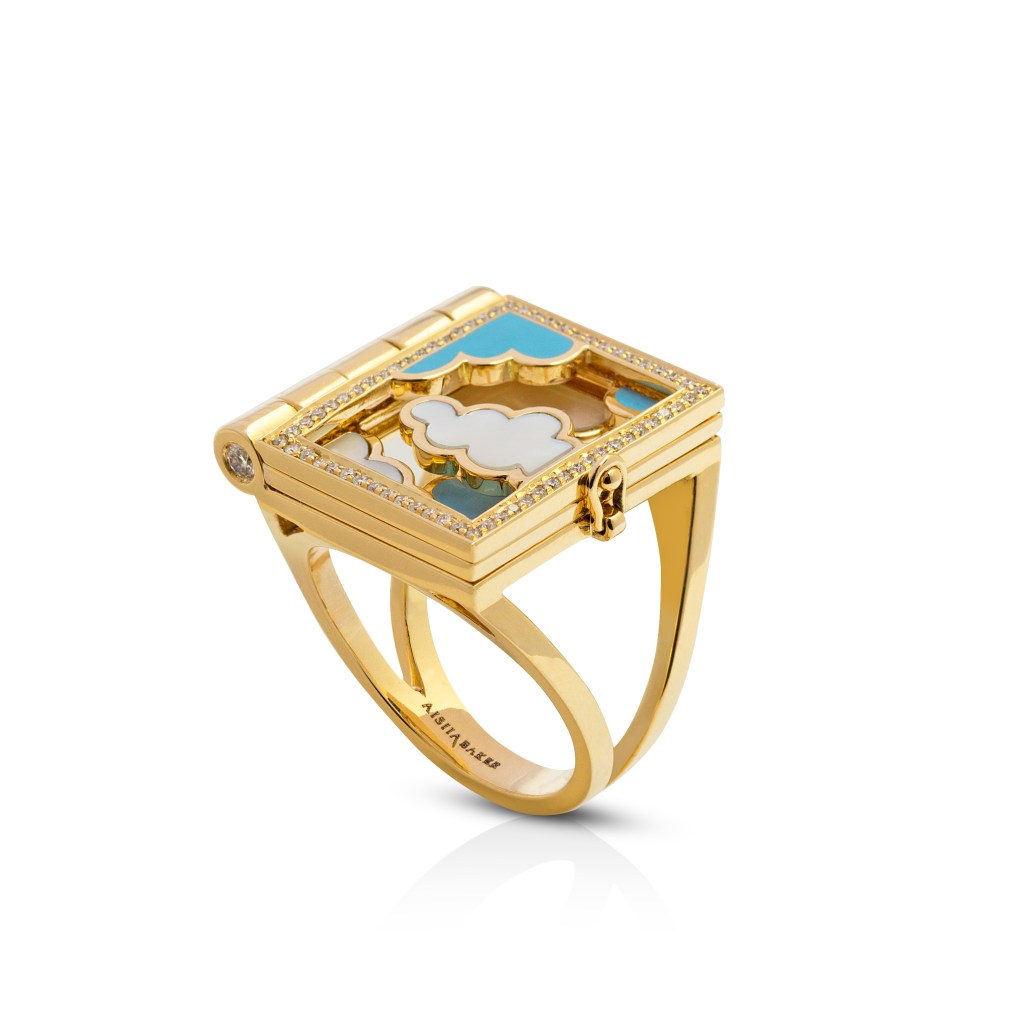 Founders and designers Aisha Baker and Hoonik Chang launched their Dubai-based brand in 2017. The pair are looking to see how that can fit in the American market as both first-time exhibitors at the show and members of the Design Atelier program.

They are close friends with Chang using Baker as his muse, channeling her “fashion energy” into their collections.

“Couture is known for accepting and promoting innovative pieces not only classic jewelry,” the pair said of their first time showing at an event of Couture’s size. “Considering our brand DNA, we think it is a right place for us.” 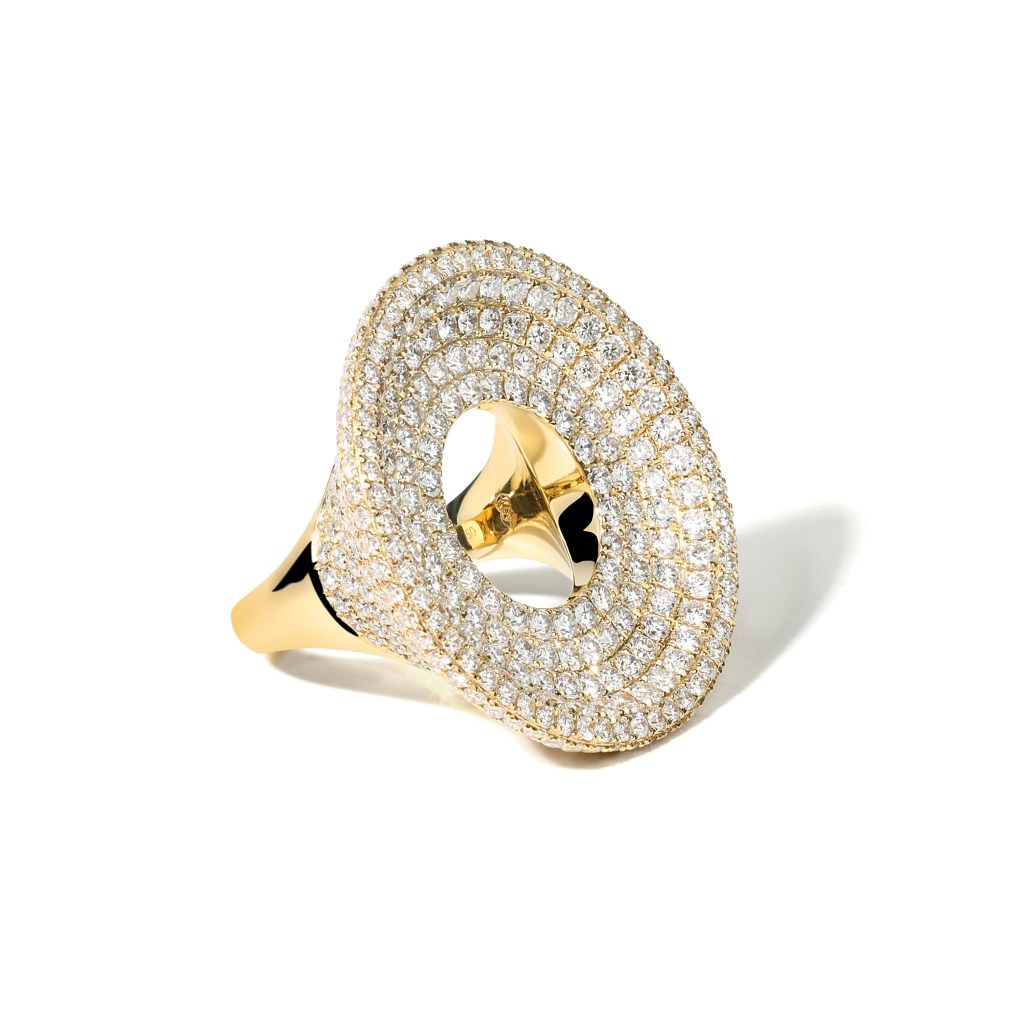 State Property was founded by two designers from the opposite ends of the spectrum. Afzal Imram, an industrial designer and Ruiyin Lin, a jewelry designer.

“Our inspiration usually comes from science and nature,” the Singapore-based crafters said. “We find something that we can’t stop thinking about and then translate it into jewelry.” The two say the wearer is also a key to their process, adding “the people we meet, and their relationship with jewelry, affects how we design our pieces.”

The designers say the State Property customer, “is someone who appreciates both style and quality, and treads on the line between opposites. Between boldness and subtlety, old and new, future and past.”

The designers use 18K gold, diamonds, South Sea and Akoya pearls, and recently added enamel. “We normally choose our materials based on the concept and design we’re hoping to achieve for each collection,” they explained.

While their George Pavé Signet Ring is a bestseller, the designers have also had a lot of success with their range of negative space rings. At Couture, they will unveil a new collection called The Voyager, a lineup of colorful, bold pieces with a major graphic element. “Hopefully [the new collection] brings about a less serious side of State Property,” the designers said.

The two are in their first year in the Design Atelier program and are excited to explore the U.S. market, adding “from where we stand, the U.S. seems to be the tastemaker of this segment of fine jewelry with a healthy consumer base, based on the wide variety of independent labels doing exceptional work.”

Their pieces range from $700 to $30,000 and are currently stocked in eight store locations in four countries, including Goop Lab in New York and London, and Athalie in Tokyo. 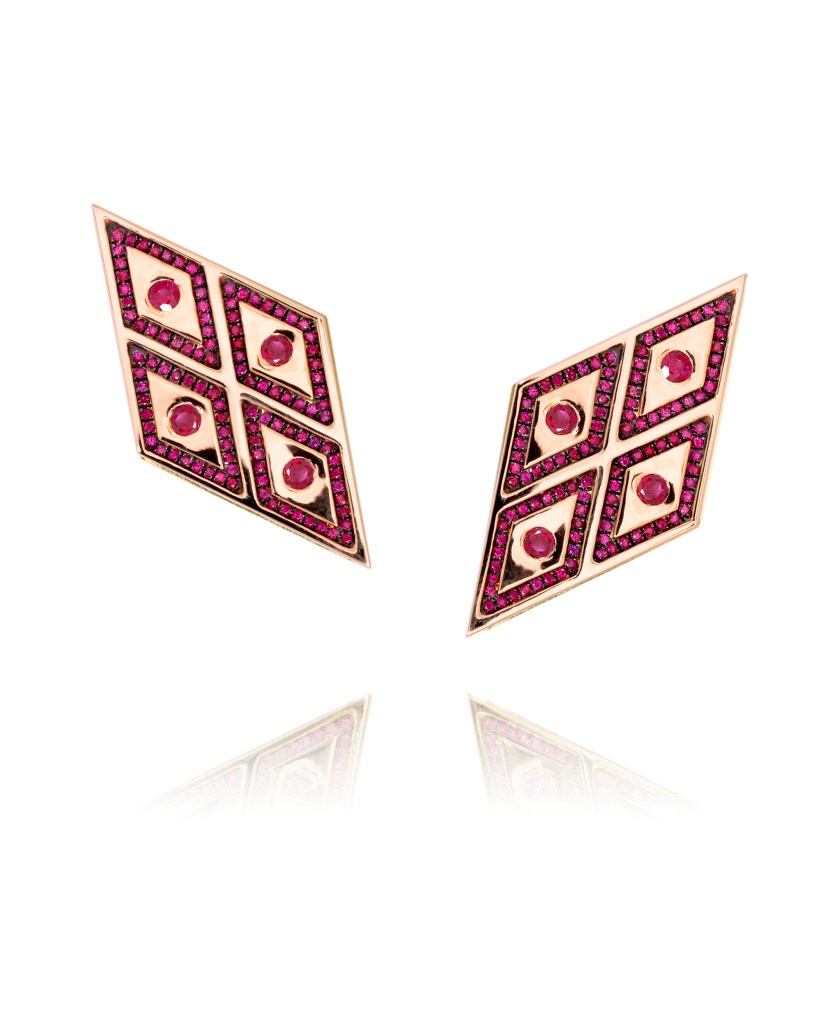 The Lebanese designer launched his namesake brand in 2011 after working at several larger houses and is also a first-year member of the Design Atelier program.

“It’s very organic,” he said of his creative process. “I’ll usually have something inspire me, usually architecture or history-related, and I’ll then do research on that subject, which eventually translates into design ideas. Over the course of many months I’ll sketch and work on test pieces until I eventually get to my final prototypes, which make up a final collection. It’ll normally take around six months from inspiration to final pieces.”

The designer said his customer base varies greatly from young trendy Millennials to older women with a contemporary sense of style. “What they all have in common is that they are modern, have bold taste, and usually buy their own,” he explained.

The designer uses 18K gold (white, yellow and rose) with a wide range of gemstones from classic precious stones to semi-precious stones, such as garnets, tourmalines and amethysts. “I just love the preciousness of it all, and I feel like gold jewelry has a more timeless feel to it — it certainly ages better,” he said.

His bestsellers are his Arabesque Deco rings, which have become brand staples; he attributes their popularity to “Queen Rania [of Jordan] being spotted wearing them so many times.”

His pieces range from $750 to $40,000 and up, and can be found at retailers around the world including Moda Operandi, The Webster, Harvey Nichols London and Bloomingdale’s Dubai.

He will introduce his first new collection in two years called Heliopolis at Couture. “It’s inspired by an ancient Roman city in eastern Lebanon by that name, which today houses a stunning archaeological site and the largest Roman temple in the world. The new pieces are inspired by the patterns and sculptural elements found in that site, and in ancient Roman temples in general.” 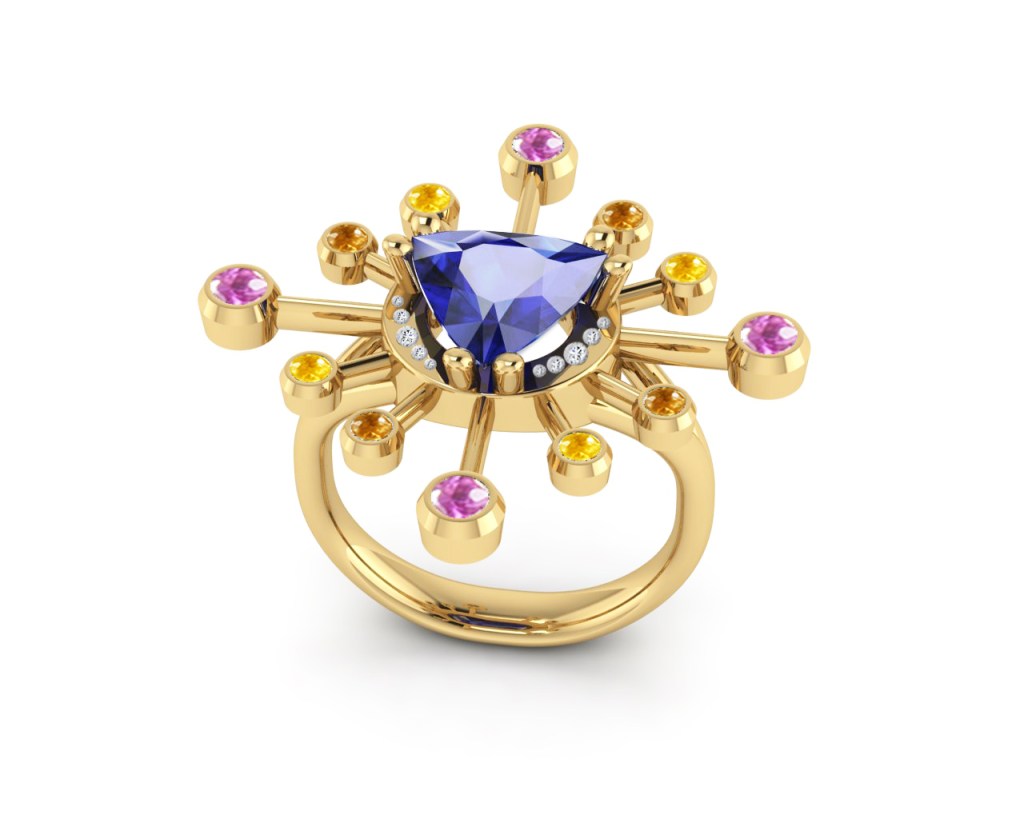 Designer Anna Maccieri launched her brand in January 2019 in her home country of Italy at Vicenzaoro. The designer has spent many years in the industry working on projects in the design offices of brands such as Cartier, Jaeger-LeCoultre, Bulgari Watches and Tiffany & Co.

Her brand is inspired by her heritage in watchmaking and by the overall theme of time and Maccieri Rossi, also a first-year Design Atelier member, uses materials and techniques used normally in the craft of watchmaking.

“I am obsessed by creating pieces that have volume and personality but keeping some lightness and softness,” the Italian designer said of her work. “I feel very lucky because I am surrounded by very talented artisans and goldsmiths with a great know-how, craftsmanship and experience. I love to work with them and to discuss about challenges and limits to overcome.”

“I love to play with mother of pearl, sapphires and diamonds, hard stones,” she said of her collections. “For what concerns the craftsmanship, I use techniques such as guilloché or other finishing of the metal, sculpture, engraving, painting, marqueterie of stones or wood.”

Movement, she said, is key to her collections. “Teatro, one of my collections, is the perfect expression of this concept,” she explained. “A very special amulet equipped with a movement that makes the disc turn every 24 hours. It is an homage to memory through imagination.”

For a five-month-old brand, social media has played a key role in helping her get the message out. “In particular, I think that Instagram is a revolution for brands like mine,” she explained. “I have my own profile and I have the chance to enter in contact with other designers, gallerists, buyers, exchanging ideas, sharing feedback.”

She’ll unveil her newest collection called “Sunray” at the show. 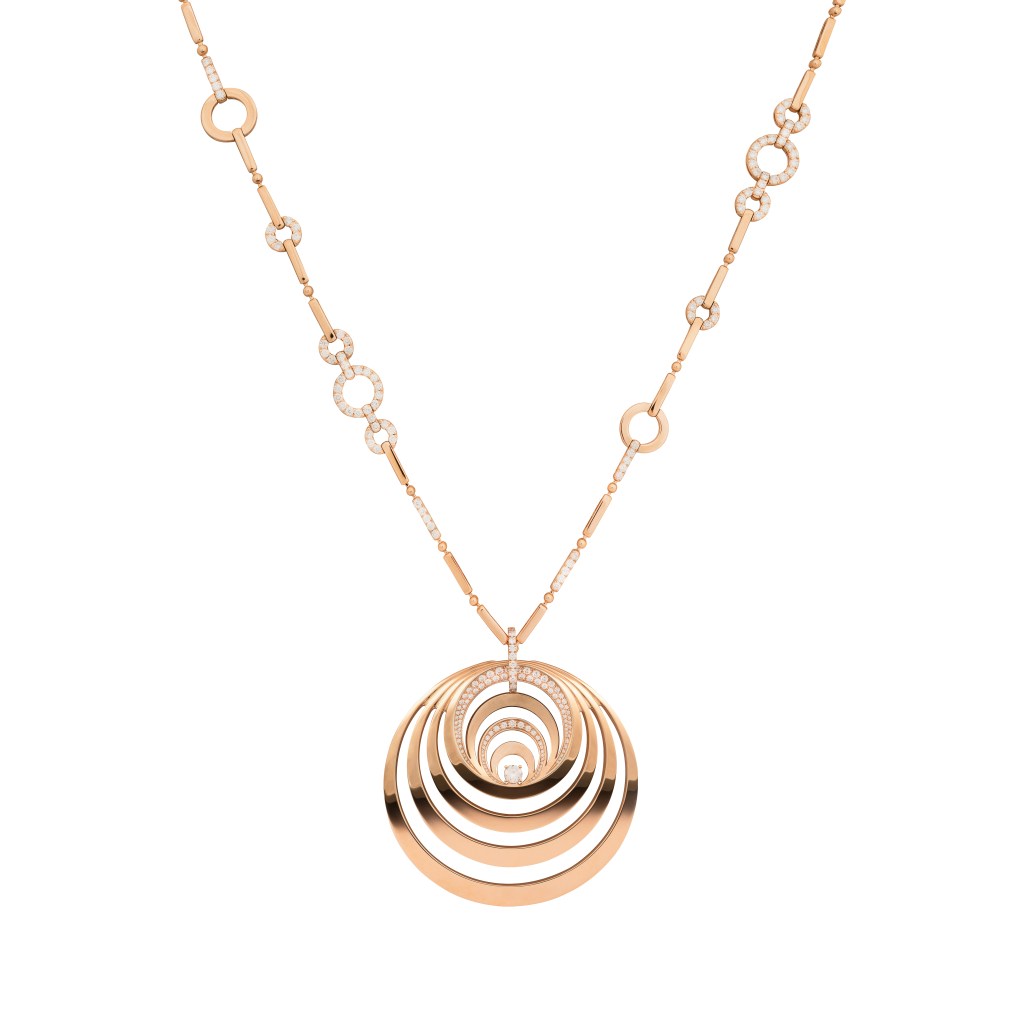 “Since 2011, we have been expanding globally out of Italy, when I officially became the head of our brand. But for the U.S. we are still very new in the market said Massimo Gismondi, chief executive officer and creative director of Gismondi 1754.

“Couture is the next step to realize our expanded distribution to the best stores in the U.S. market,” the executive said of the brands first time at the show.

Gismondi said they have had a strong response from American buyers so far and, “we know that there is a great audience of new buyers and retailers who may not have been exposed to our brand.”

His inspiration, he said, often comes from stones and his home country of Italy. The brand mainly uses white and rose gold in its collections, while using various shaped stones in different sizes and directions, “as well as heights to give each piece a unique perspective. This is a base in most of our designs,” he said.

“We build our pieces, much like all of the houses used to create a hundred years ago,” he said of his process. “We still use clay, molds, casting and a range of specialty techniques, but we add into my designs a touch of contemporary and elements of discovery that make each piece often unexpected, and always unique.”

Today, he said, his customers are more savvy than ever. “Many are looking for something less recognizable as an investment or a unique proposition that is more of a discovery than the same as other retailers or mass clientele is wearing,” Gismondi said.  “Often they are not buying our pieces online even in this modern time, because they still like the romance of being able to see, touch, try and learn about the piece and how it feels for them personally before they purchase.”

Retail price points start at $500 and high jewelry goes up to the millions.