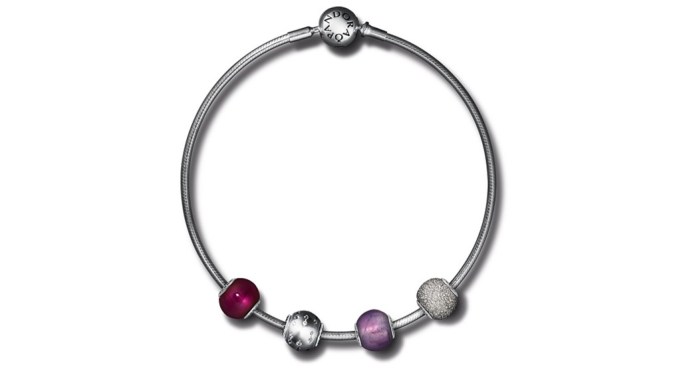 Pandora Group, the Danish company known for its charm bracelets, is hoping to broaden its consumer base with a new collection called Essence.

The line, which will hit Pandora stores on Monday, represents a second attempt for the midmarket, charm-centric jeweler at elevating its collection. In the past, the brand attempted to offer a higher-end 18-karat gold collection, but according to Scott Burger, president of Pandora North America, the jewelry brand “alienated its core customer.” In the U.S., that core consumer is a suburban woman in her 40s.

The new collection, he said, is a “logical and safe brand extension,” as the price points are in line with the company’s core collection. Essence starts at $60 for a sterling silver bracelet. Shoppers can choose from a variety of beads, which will retail from $30 to $65 apiece. Unlike its Moments collection, which is a charm-based line geared at celebrating an event such as an engagement or a birthday, Essence is all about the individual, according to Burger.

“We wanted there to be a distinct difference between commemorating moments and meanings. We didn’t want to blur the two,” he said. “For us, there is a style element to Essence. It gives people the ability to wear [the collection] in different ways.”

Indeed, shoppers can purchase an individual bead, which will remain in place thanks to a flexible silicone grip built inside each charm, or they can buy multiple beads to create a unique look.

Pandora is hoping its core customers — and some new ones — will embrace the line, which capitalizes on the “individuality” trend that U.S. brands such as Alex and Ani have thrived on in recent years. Although Pandora is more like a big fish than a small guppy in the space — in 2012, the company logged $571.2 million in sales in the North America region and about $1.17 billion in total sales — it could still gobble up major share here, Burger said, explaining that “meaning” is central to Essence’s potential success.

Lee Gray, vice president for creative at Pandora, was charged with developing meaning via the creation of charms that each represent a different value or concept. Values include confidence, wisdom, joy, happiness, trust, freedom and prosperity. Beginning with 120 concepts, Gray culled the list down to 24 and worked with his team to source stones and metals that would reflect each value.

Gray said part of his inspiration behind designing the collection came from other brands, such as Philosophy, the skin-care company.

“I love the way they interact with women,” he said, and pointed to Pandora’s own advertising campaign, which he hopes will mimic that sensibility.

Set to launch in tandem with Essence is a print, television, video and digital campaign featuring eight different women who are considered influencers of sorts. Pandora’s muses run the gamut from a social entrepreneur and research scientist to a cosmetics creator and yoga instructor. Each woman chose a value that represents them and spoke about it on camera or in print.

“The most important element was the women,” Gray noted.

“We don’t want to alienate our existing customer,” Fairchild said. “The bracelet is an extension of what we do. All consumers are searching for something. This collection has timeless longevity and meaning. It comes down to values.”