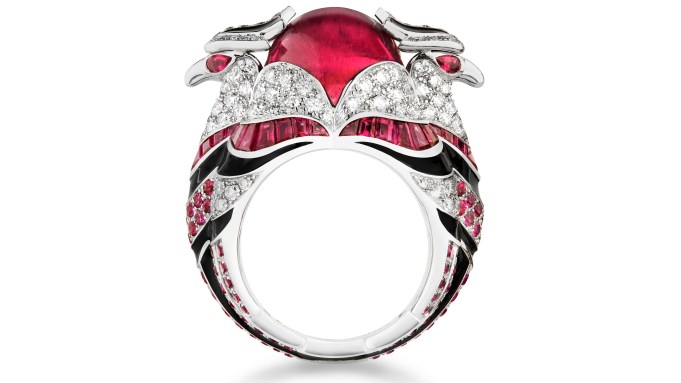 PARIS — Strong color and graphic shapes were the standout features of the high jewelry collections unveiled during Paris Couture Week, as brands sought to make their mark amid rising competition and a darkening global economic outlook.

The January preceding the Biennale des Antiquaires, the industry’s top showcase, is traditionally a time for houses to take a breather as they prepare their flagship collections for the art and antiques fair, scheduled for Sept. 10 to 18. Accordingly, fewer houses were present and the collections they showed were smaller.

But some are starting to question the central role of the Biennale, which is in the midst of a major shakeup as it switches to an annual rhythm, with the fair’s new organizers assigning jewelry a less important place. As a result, industry behemoth Cartier — which in 2014 boasted the largest stand at the fair — has pulled out.

“The house has decided not to participate in the next Biennale des Antiquaires because of new technical measures taken by the organizers of this event,” the house said. “In particular, the drastic reduction in the maximum surface of the stand was considered incompatible with Cartier’s requirements and the care it takes in presenting a large number of high jewelry pieces and welcoming our customers.”

Chanel and Dior will also be absent from the fair, WWD has learned. Benjamin Comar, international director of Chanel Fine Jewelry, said there was no clash with organizers. “We get on very well with them, but this year, it is simply not part of our program of events,” he said.

It is understood fair organizers will announce the final list of participants this month, with a focus on firms with a long history and roots in jewelry making, including a number of houses based on Place Vendôme.

Hélène Poulit-Duquesne, chief executive officer at Boucheron, confirmed the jeweler would be present, adding that she was in agreement with the more “purist” vision of the new Biennale team, headed by former Louvre Museum director Henri Loyrette.

“I think it creates a healthy rivalry around the Biennale. It sets the record straight about who are the historic jewelers that have a heritage,” she said.

The former Cartier executive, who took up her new post on Sept. 28, signaled a new direction for the house by highlighting its animal-themed collections, with creations that run the gamut from its signature snake and hedgehog designs to lesser-known creations featuring horses, eagles, peacocks and beetles, among others.

“I sincerely believe that Boucheron’s animals are among the greatest assets in its collection and that this aspect is under-exploited,” Poulit-Duquesne said. “I think the opportunities to make use of it are unlimited, because the world of animals is unlimited.”

Highlights included the Chinha ring, whose eagle-head design was derived from last season’s Bleu de Jodhpur collection. It’s available in three colorways, including a version made from white gold pavéd with diamonds, rubies and sapphires, and set with a rubellite cabochon, priced at 61,200 euros, or $67,100 at current exchange.

Among the standouts in the 48-piece collection was the ultra-supple Signature Ultime bracelet featuring 265 square-cut sapphires and 221 brilliant-cut diamonds on an invisible white gold setting. Priced at $555,100, it featured a clasp set with a one-carat brilliant-cut diamond.

Comar said the drop in global watch sales has so far not impacted jewelry, pointing to a slew of recent store openings by independent brands in Paris.

“We are seeing new ways of wearing jewelry, but also new buying behaviors, so buying jewelry has become more casual, which is opening up a new market. You see much more jewelry in the press, and many new brands emerging and growing, so I think the jewelry market is quite buoyant for the time being,” he said.

Victoire de Castellane unleashed a rainbow of colors in her Granville collection for Dior, which featured diamonds, sapphires, tourmalines, spinels, aquamarines and emeralds in her signature asymmetric pairings.

In stark contrast with the intricate ribbon-shaped creations of last season’s Soie Dior line, the designer opted for almost naïve combinations for the 12-piece line, consisting mainly of rings and earrings, together with one bracelet, at prices ranging from 75,000 euros to 175,000 euros, or $82,200 to $192,000.

“I liked the idea of having something lighter and a little simpler in terms of settings, with the accent really on the stone combinations,” she explained. “Women want to wear their jewelry during the day. They like to match the pieces to their outfit.”

The same craving for color and graphics was apparent in Sabine Getty’s Memphis collection, which is liable to come as a surprise to fans of her previous Medieval-inspired creations.

In a radical about-turn, Getty drew inspiration from the Memphis design movement of the Eighties for pieces based on a single wave or zigzag line rendered in blue, yellow, pink or green topaz. Prices range from 900 euros ($985) for a ring to 30,000 euros ($32,885) for a choker.

The designer has changed the name of the line from Sabine G to Sabine Getty to reflect its evolution. “I think it’s good I got a bit of time to really think about, ‘What do I want to do? Who am I? What’s my direction?’ And I think I found I’m pretty happy here, because I’m all about color and playfulness and humor,” she noted.

Chopard set off the brilliance of its colored gems with titanium colored to match the hues of the stones. Its eight-piece collection included a psychedelic cuff featuring two butterflies perched on titanium foliage set with rubies, emeralds, topazes and amethysts, among others.

Color is even seeping into the assortment at De Beers, which is reporting a rise in interest in colored diamonds.

It displayed a selection of items sported by celebrities including Cate Blanchett, Rita Ora and Kate Winslet in its Rue de la Paix showroom. They included a ring featuring a dazzling 12-carat yellow diamond, identical to the one worn by singer Adele and sold the following day at the brand’s Harrods store.

“We want to offer this type of collection to clients who might like the look first of all — the color might be fantastic on different skin tones — but also people who want to have a more confidential piece, because you don’t necessarily know it’s a diamond,” said Sidonie Robert-Degove, managing director for Europe and USA at De Beers Diamond Jewellers.

Highlighting its design credentials and red-carpet appearances is part of the company’s ongoing effort to address female customers. Among its projects for 2016 is the opening of a flagship on Madison Avenue in New York.

“Customers today, whether they are coming to choose their engagement ring or buy high jewelry, are increasingly women. We are making the stores a lot more feminine,” Robert-Degove noted.

Charlotte Dauphin de la Rochefoucauld said she plans to open a second showroom for her Dauphin brand in London this year. Unlike some larger brands, the company is feeling the impact of economic factors, such as falling oil prices, on its customers’ budgets, she said.

In order to stand out in an increasingly crowded sector, Dauphin is opting for innovation with the addition of hair cuffs in white or pink gold, set with diamonds, to its Disruptive collection.

“I think innovation pays, because very big clients who already have a lot of pieces are really looking for something exclusive and new that they haven’t spotted elsewhere,” the designer noted.

Elie Top is also betting on the allure of the idiosyncratic for his second collection, Etoile Mystérieuse, which features geometric designs made from oxidized silver and gold with onyx or labradorite center stones, which can be concealed through a mechanism of rotating spheres.

Among the inspirations he cited were stars, old compasses with sundials, military medals, UFOs and curved mirrors. Top, who has a private salon on Rue Saint-Honoré and a selection of pieces for sale at Paris concept store Colette, hopes to stage more trunk shows. “I’m trying to take it to the next level,” he said.

Hermès nodded to its heritage — namely its first jewelry design in 1927 — with an exhibition at its Rue de Sèvres store focusing on silver pieces.

The house included two new lines: Chevauchée, featuring onyx and red, green, yellow and cream jasper with intaglio engraving, and Ever Chaîne d’Ancre, a graphic take on the signature house collection, set with brown diamonds. Prices for the latter ran from 355 euros, or $390, for a ring to 31,900 euros, or $34,970, for a bracelet.