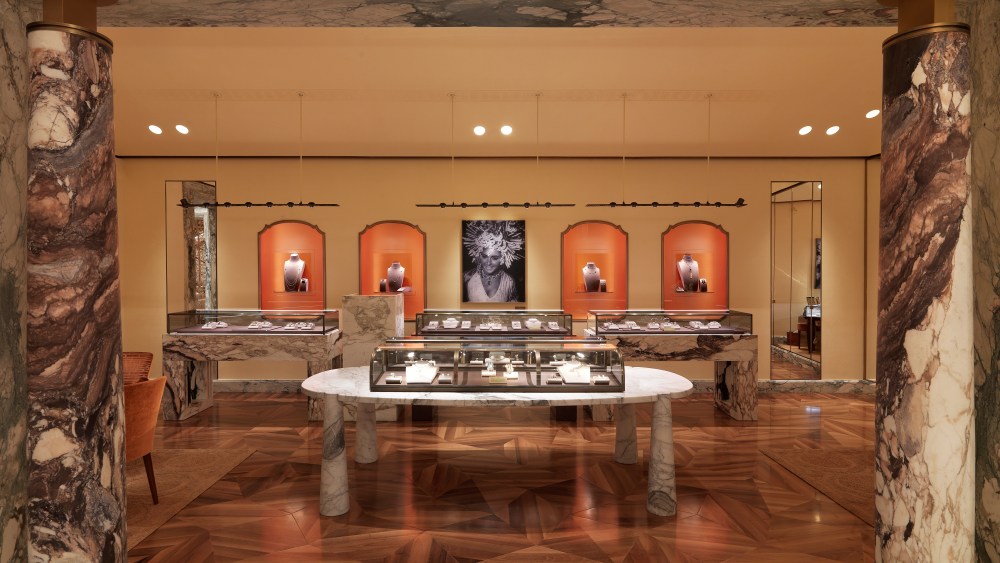 The Italian jeweler enlisted Peter Marino on the design concept, who took a cue from the Via Condotti flagship in Rome. The 5,381-square-foot store spans two levels, allowing for a larger and more visually enhanced selling floor. The brand relocated temporarily in July to 153a New Bond Street and moved back to 168 New Bond Street in January. The New Bond Street location is the first U.K. boutique featuring the architectural store concept Marino developed for Bulgari in Rome.

“We just reinvented the store, taking as much advantage as possible of the shape of the store,” said chief executive officer Jean-Christophe Babin. “In London, we have a lot of clientele who really want to buy in a very intimate, private, discreet environment which requires obviously to have those very special rooms where you can feel good but also protected from the outside world.”

While the size of the store remained unchanged, the layout has been updated. The main promenade was designed for shoppers to view the rooms within the central area. From the main entrance, shoppers can navigate through various rooms that showcase women’s jewelry and watches, the men’s area, a VIP room and the accessories area. The men’s area was designed to look like a Fifties gentleman’s club using dark colors while the accessories room is a nod to the Seventies and Italian designers including Scarpa and Mangiarotti.

An architectural staircase was created with geometrical hexagonal steps, inspired by one designed by architect Carlo Scarpa for Palazzo Abatelli in Italy. Bulgari’s first floor houses the high-end accessories area, two VIP lounges and the “Happening” Room, which the jewelry house utilizes for private events and exhibitions. The rooms of the upper-floor feature ceiling vaults that were influenced by John Soane’s house, with the original top skylight restored. Marino took black-and-white veined marble and travertine for the external facade, paying homage to Roman architecture.

“I have been personally working with Peter [Marino] over the last few years, ever since I joined Bulgari,” said Babin. “We started the project more or less three years ago with Peter and one of the first stores designed by him was via Condotti. So now we have done with Peter more than 25 stores that are directly designed all from his concept. Peter himself loves Rome. He has been really able to capture from the brand history, from Rome, a lot of sites, of colors, materials, which eventually were able to create a very unique universe, as he did in Condotti and he has done here in Bond Street.”

Babin declined to reveal the cost of renovation, or how much volume the U.K. boutique generates but noted that the New Bond Street flagship is a new global concept for the Italian jeweler.

“Anything from September onward will reflect that concept,” he added. “Obviously with different stages of sophistication because you don’t exactly build the same boutique in a department store or an airport with very high traffic than you would do in a high street. According to the size and the location you won’t exactly find the same. For example, this furniture is reserved for London. You won’t find it in Paris, you won’t find it in Rome. Generally speaking the atmosphere is very Roman, very magnificent, very warm, very sophisticated, amazing textiles and carpet.”

According to Marino, the original store was created with Elizabeth Taylor, one of the jewelers’ most famous customers, in mind. “She serves as the perfect ideal – a glamorous, feminine muse and inspiration for Bulgari’s new look.” he told WWD.

Marino placed an Antoine Poncet sculpture at a central location of the boutique, adjacent to the grand staircase comprised of pink Aurora marble from Portugal on a Porfido stone base.

“The tones of the crystal-ice pale pink marble are as subtle as many of the Bulgari gem stones,” said Marino. “The continuous flowing line of Poncet’s work appears to have no beginning and no end. The sculpture is feminine and eternal, easily reflecting the values of the Bulgari brand.”

In addition to the sculpture, Marino pointed to the marble columns as a standout for the store. “Particularly notable are the modern marble columns that have a jewel-like bronze pin connecting to the structure above,” he said. “Classically this is how ancient columns were constructed; the head of the column would be placed on this three dimensional pin. I love the fraught modernity of revealing the connection point.”

In terms of challenges, Marin found that the exterior was one in itself. “The exterior was landmarked,” he said. “Or listed, as you call it — naturally as an architect, I’d like to think that I could improve an exterior, but to work within the limits and constraints of a landmarked building is its own architectural challenge and the process has its own associated qualities of respecting a city’s heritage.”

With four stores in the U.K., Babin noted that the U.K. is an important European market for the brand. “London is obviously a place for a luxury company,” said Babin, “alongside New York, Rome, Milan, Paris and Tokyo. It is a city where your presence must be extremely visible and extremely prestigious. It is a place where people buy high jewelry very naturally. And it is a place also which is a crossroads of different ethnic groups, cultures and civilizations. The British remain an important part of our clientele. They buy a lot of Bulgari and people who come in from all over the world, from the Middle East or China. London is quite a unique crossroads when it comes to the variety of clients.”