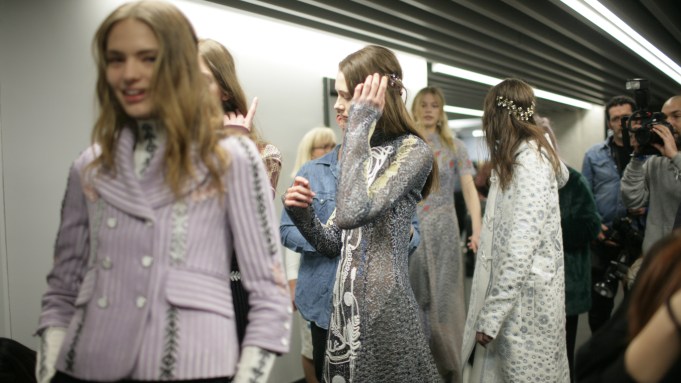 The collection is based on the wintry northern landscapes that inspired the duo’s fall outing, and on their abiding use of color and geometric patterns.

The range is called “Arbol” and features more than 10 styles. It will go on sale to clients in Paris starting this week. Prices range from $99 for a hairpin to $1,250 for necklaces.

The rhodium settings are spare, with shapes both organic and mechanical, the latter with an air of Alexander Calder’s spindly sculptures. Square- and round-cut crystals resemble bits of hard candy in colors such as amber, deep purple, royal blue, amethyst and clear like diamonds.

Designs range from statement pieces, such as a choker and a large cuff, to more delicate ones, as in the dangling earrings.

Models wore some of the pieces — including earrings and hair ornaments — at Pilotto’s runway show in London last week.

“When we started designing we were looking at our embroidery and graphics and how we could make them come alive in three dimensions,” Pilotto told WWD.

He added he and de Vos also spent time working out how those patterns and colors could fit on the body and understanding the mechanisms of components such as chains.

He described the designs as “offering functionality with a natural feel” and said the earrings resemble miniature mobiles.

Backstage after the designer’s runway show, which was filled with winter sky colors, embellishment and shine, Pilotto said some of the jewels were meant to look like “frozen-looking mechanical branches and glass.”

During the interview, de Vos added that it was natural for the duo to move into jewelry.

“We love jewelry and we love looking at it on women. We also have an ongoing relationship with Swarovski and we looked at what we were doing with the crystals in our clothing and how that would apply to jewelry,” he said.

Nadja Swarovski, a member of the Swarovski executive board, said Pilotto and de Vos “manage to combine both new and classic perspectives in women’s clothes brilliantly.”

She added that after the duo scooped the Swarovski Collective Prize last year, “it felt like a natural evolution to collaborate with them on an Atelier Swarovski jewelry collection.”

Atelier Swarovski is a luxury crystal accessories line that launched in 2007 and has featured collaborations with some 60 designers from creative fields including fashion, jewelry, architecture and design. It follows the fashion cycle by launching new collections twice a year during London and Paris fashion weeks.