HONG KONG — Sotheby’s is no stranger to the rare, beautiful or historic. But one particular lot the auction house will have going up for sale next week here has collectors buzzing the world over at a level that’s unusual for such rarefied circles.

The Pink Star, a 59.6-carat oval mixed-cut pink diamond, and the largest internally flawless fancy vivid pink diamond that the Gemological Institute of America has ever graded, will be auctioned off on April 4.

While the specimen itself is nothing short of impressive, the stone carries a back story that makes it even more intriguing. In 2014, Sotheby’s thought it had sold the diamond for a record-setting $83.2 million. However, its winning bidder, a diamond dealer by the name of Isaac Wolf, failed to pay up after his investors backed out, leaving Sotheby’s in a lurch.

The usual custom would be to approach the second-highest bidder, but for undisclosed reasons, the Pink Star – among the most spectacular and rare diamonds ever to surface – ended up remaining in the auction house’s inventory instead.

In the three-year interim, Sotheby’s has shopped it around privately, and also taken on two investors, Diacore and Mellen Inc., to derisk the stone.

“It was decided that having a partner would be the most sensible thing to do, and the fact that people were invited to buy into the stone gave a very healthy indication of the market,” said Quek Chin Yeow, Sotheby’s head of international jewelry in Asia.

Then, with relatively little notice, the diamond was put up again for sale at public auction. The return is a move that Tobias Kormind, founder of 77 Diamonds, Europe’s largest online jeweler, calls “brave,” given the stone’s history. But it’s also one hinged on good timing. 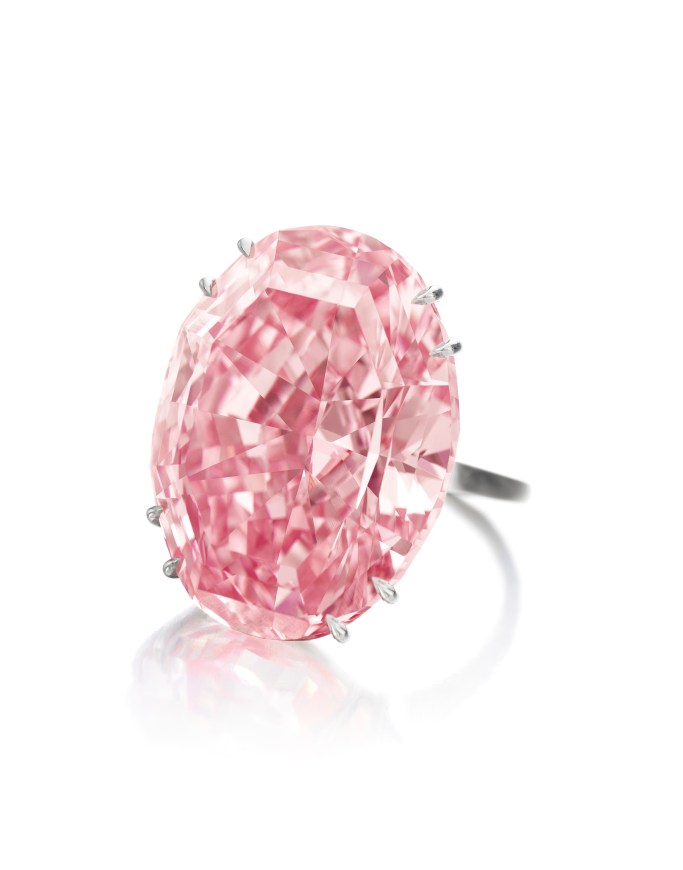 “I think that the diamond market as a whole has had a couple of wobbly years,” he said. “White diamonds have declined a bit over the last three years, and that’s got to do with nervousness about luxury goods purchasing from China, oil prices that have affected Middle East purchasing and there’s been crises in Russia.”

Sotheby’s failed to move the Lesedi la Rona, a 1,109-carat rough diamond, the second-largest rough diamond to be discovered in more than a century, in London last June. It was estimated to sell for $70 million, but couldn’t find a buyer. Similarly in April 2016, the Shirley Temple, a polished blue diamond with Hollywood credentials thought to be worth $35 million, also didn’t sell, which, according to Kormind, “prompted gasps of shock in the Sotheby’s New York sales room.”

But all those issues have eased now — and an improving American economy plus a Trump presidency has the superwealthy feeling more bullish, prompting Sotheby’s to bring the pink diamond back out, although at a conservative estimate of $60 million.

“They’ve put the threshold valuation so low, there’s no way they’re not going to achieve it,” said Kormind, who believes the stone could break past the $100 million mark.

It’s also no coincidence that the sale is marked for Asia, instead of Geneva, where it was held in 2014.

“It’s really the top collectible and investment-level,” said Chaoqiu He, who owns the Chinese fine jewelry brand Qiu. “They know Asians still have quite strong purchasing power compared to the rest of the region. That’s why they put the auction here.”

In He’s experience, the ultra-luxury market for Chinese never dipped. “I know in 2015 the economy wasn’t that strong, but I have to say from our side, people are more interested in the real good stuff,” He continued, differentiating between mere conspicuous consumption versus a store of wealth. “This product doesn’t actually really hurt. They don’t spend money on the usual, but they still want to spend the money on the really good stuff. That’s what I experienced in the last two years.”

Rich Chinese have always had to grapple with the dilemma of where to store their wealth, faced with currency depreciation, an overvalued property market in many cities and a volatile stock market.

“If you have tons of cash, you don’t want to put it in the bank. And if you buy real estate, in a lot of cities in China, it’s ridiculously high, and all those buyers already have property outside of China anyway. What else can they invest in? Art, gemstones, there’s just a few categories,” she said.

Comparable quality pinks have been going for about $3 million per carat in the last three years, He said. While the immense size of the Pink Star means it would not yield that kind of a per-carat rate — even at its low threshold — the sale is set to mark a world record.

“There is definitely a supply gap emerging for fancy colored diamonds, as these diamonds are a diminishing natural treasure,” continued Coppens. “With regard to costs, certainly as you go deeper into a diamond pipe and move from an open pit to an underground mine, there is an additional capital investment required.” 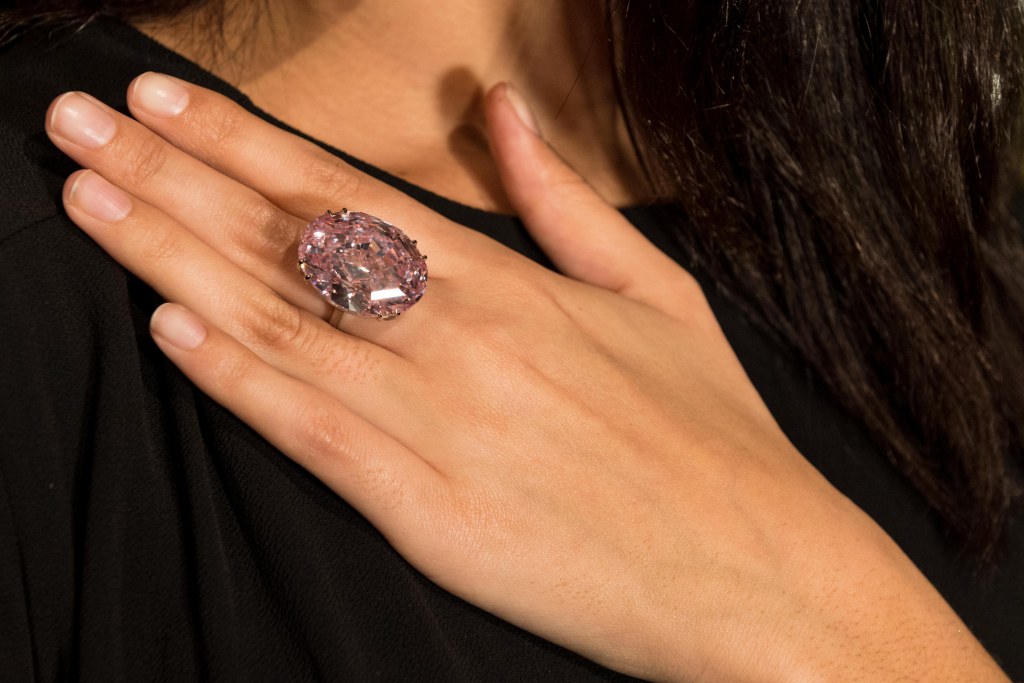 That said, the Pink Star did not come from Rio Tinto’s Argyle mine in Australia, which is the world’s only consistent producer of rare pink diamonds, responsible for 90 percent of such stones worldwide.

Now as to who the stone’s lucky purchaser might be: Hong Kong tycoon Joseph Lau is known to buy record-setting colored diamonds for his young daughters, typically naming the stones after them. In 2015, he acquired what was then the world’s most expensive diamond for his seven-year-old daughter, paying $48.4 million for the “Blue Moon” of Josephine, the day after he scooped up a pink diamond for $28.5 million that he renamed “Sweet Josephine.”

However, it should be noted that Lau has been in and out of the hospital for poor health recently. His retreat from usual business dealings and the public limelight even had local press speculating on whether he’d passed away this month until the executive was sighted at his company headquarters. Meanwhile, Mexican business magnate Carlos Slim is also a known collector of rare reds, but a company such as Graff Diamonds or a consortium of investors are likely to be in the running, too.

The buyer could also be a complete dark horse — or one never known before.

“Much of what we do is behind closed doors and out of the public eye,” Sotheby’s Quek said.

“You may see a few people who are not known to have bought large, expensive stones, as well,” Kormind said. “It’s an awesome marketing tool, if you want to get your name out there, to declare yourself part of the new elite. It would make Trump jealous.”