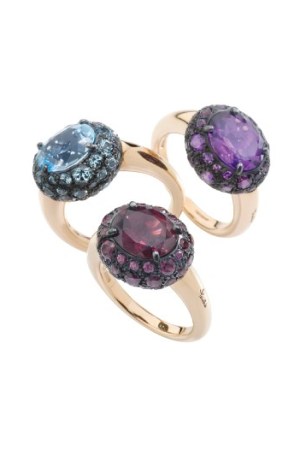 MILAN — Pomellato continues to expand in the U.S., this time with this month’s opening of a 540-square-foot unit in Miami, which follows an outpost in New York that bowed last year.

“Pomellato’s creativity stems from our renaissance culture and because we want to be coherent with our past,” said Francesco Minoli, Pomellato’s chief executive officer. “We want to keep targeting those markets that are sensitive to our product and understand it.”

The Miami boutique is expected to generate sales of about $3.8 million in the first year.

The store’s centerpiece is a crystal showcase, framed with black marble and veiled with wooded strips, while the rest of the space is modeled with black lacquered panels, champagne-tinted silk shantung and transparent canes that intersect light.

Pomellato also has ribbon-cutting ceremonies planned for Munich this spring and in Venice in the fall. Still tentative are a shop in Geneva and one on Madison Avenue in New York for Dodo, the firm’s younger line of flora-and-fauna-shaped charms. Pomellato has 26 stores worldwide.

Given the times, Minoli is more concerned with maintaining the brand’s position in developed markets such as Europe and the U.S., rather than venturing into new ones.

Aware consumers are less averse to spending if they can “justify” the purchase, he is convinced the relationship between the assortment and the consumer has changed drastically. In the new collection, the quality bar was raised with classic techniques and more intricate shapes.

Standouts include the Tabou, anchored on rings and earrings made with burnished silver balls filled with rhodolite, amethyst or blue topaz pavé, and Ming, which recalls Oriental craftsmanship with lacy cut-out designs in rose gold for earrings and long necklaces.

Minoli thinks the recession will leave scars at all levels, but said that while the damage of the crisis is everyone’s focus, he’s pleased it will help regulate the world of finance. He is also convinced that exclusivity is a fundamental characteristic of luxury.

That explains the success of Pom Pom, Pomellato’s debut with one-of-a-kind pieces that included 80 elaborate rings, each made with rare stones. In one year, 72 pieces sold at an average price of 45,000 euros, or $57,427, each.