Pomellato’s Second High Jewelry Collection Is an Ode to Sustainability, History of Brand

It is also a major development of the brand’s commitment to sustainability.

As the pandemic did not allow Castaldo to travel around the world — always a great source of inspiration for the designer — he traveled through time, revisiting storied and signature Pomellato pieces in a sort of metamorphosis, and taking “an introspective journey into Pomellato’s history.”

Castaldo underscored that “rather than being inspired by the past,” he physically reworked the jewels “with a new disruptive approach, creating new jewels. The collection came together in a fun, spontaneous way. It was wonderful to find such a seamless interaction and natural harmony between pieces from Pomellato’s past and present.”

The designer admitted he was influenced by the traditional Japanese mending technique and art of kintsugi that upcycles damaged gemstones, repurposed into one-of-a-kind jewels, which led to Pomellato’s first capsule collection last January, as reported.

For example, Pomellato’s first crosses date back to 1984 and in the high jewelry Bavarole Trittico, Castaldo integrated three signature designs into a single neo-Baroque necklace. A gold and garnet Byzantine cross from 1993 is flanked by two rose gold and jet crosses from 2003 and 2013, the latter delicately engraved. Gold bracelets from 2004 form the chain from which the 2007 Harem collection’s gold and rock crystal pendants are suspended.

“This is a sustainable approach to jewelry, breathing new life into jewels that were part of our archives,” said Castaldo.

The “idea of re-loving” reflects Pomellato’s values and is also very much in line with the environmental efforts of parent group Kering, said chief executive officer Sabina Belli. “There is continuity in this collection, a desire to bring sustainability to the world of luxury goods that also allows us to reinvent ourselves both as artisans and designers,” said Belli.

The jewels were made at the Casa Pomellato ateliers in Milan, where 100 artisans work to make each collection by hand, sourcing gold that is certified.

“The idea of this chapter of the collection originated in a conversation with American artist and designer Sheva Fruitman” said Castaldo, who carefully chooses his words to fully convey his passion for jewelry. “We were discussing sustainable development in the luxury industry, and she suggested using vintage jewelry to create new designs for our new collection. We thought it was a very interesting idea, and I used the elements from our past as fragments of our memory, then anchored them in the present.”

In the brand’s high jewelry segment, Castaldo has aimed to “maintain the same irony and irreverence that Pomellato has always brought to traditional jewelry.”

With the Haiku Turquoise T-chain, Castaldo transformed a Japanese coin-shape carved from a vibrant turquoise into an asymmetric closure, and added a T-bar clasp in jet. Yellow and rose gold elements from the 1996 Moneta Giapponese collection and the 2008 Victoria collection are complemented by two coin shapes set with a diamond pavé that add warmth to the jewel. 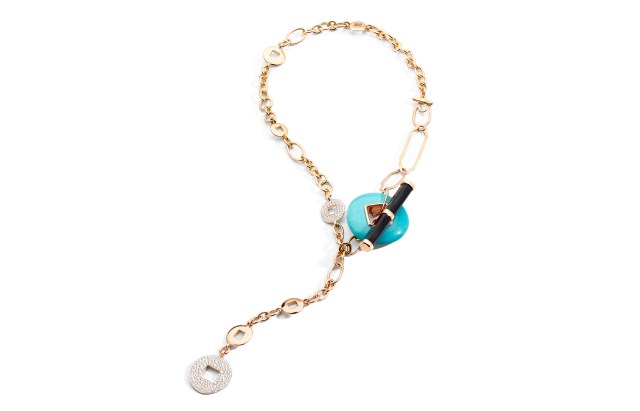 Pomellato’s passion for color is expressed in the Rivière Venezia design, a delicate combination of pastel gemstones from the 2009 Arabesque necklace and the Pin Up earrings from 2006, with smoky quartz, prasiolite, amethysts and rock crystals. In the same spirit, the 2006 Eva cameo earrings with a snake motif are paired with blue topazes, juxtaposing opaque, organic material and transparent gems. 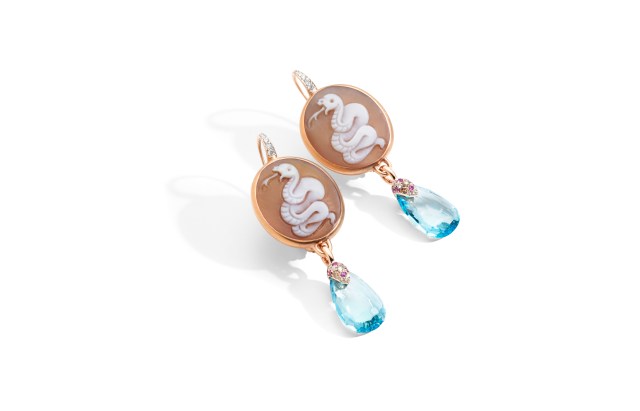 For what he called the second chapter of the collection, the designer focused on the house’s rich history of chains and sautoirs. A standout, for example, is a white gold chain composed of links set with a pavé of 2,300 white diamonds and a 48-carat tanzanite pendant in a rare cabochon cut. Castaldo said it took more than 700 hours of work to create this unique piece. 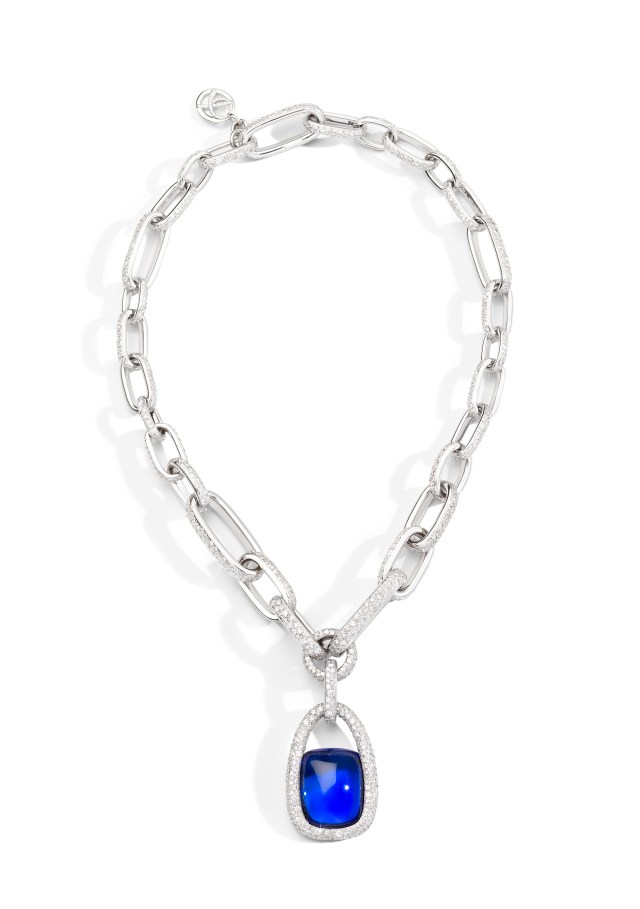 A 76.66-carat red rubellite appears to float at the center of the bold Rubellite Chain choker. The design’s minimalist lines of two overlapping rose gold chains surround the cabochon-cut stone surrounded by diamonds.

The Lock Chain blends genders with feminine yellow and gold links held together by a padlock set with diamonds that offers multiple ways of securing the jewel. The Gourmette Assoluta shows extra-large rose gold links set with a pavé of brown diamonds and five electric blue-purple tanzanite cabochons weighing a total of 70 carats complete the jewel.

“This was a deeply personal voyage into the treasures of our past,” concluded Castaldo.