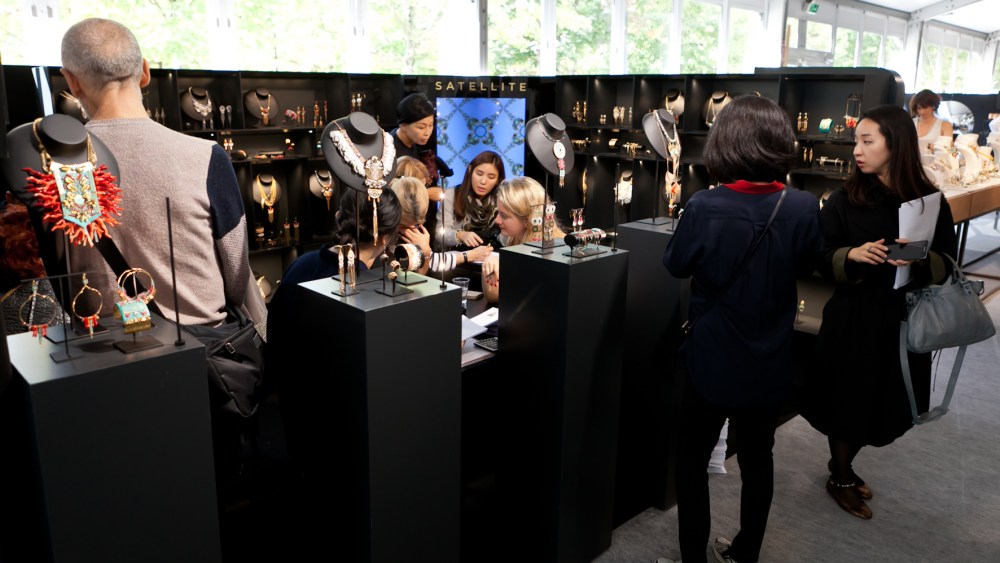 PARIS — Slow visitor traffic cast a slight cloud over the summery collections presented at the recent edition of accessories salon Première Classe here, with attendance possibly impacted by the show’s proximity in date to the first session of the tandem Who’s Next and Première Classe event at the Porte de Versailles venue, which this season was moved to September from early July.

Total attendance for the Première Classe, Paris Sur Mode and Don’t Believe the Hype salons collectively fell 8 percent to 19,106, organizers said, with an 18 percent drop in Japanese visitors and five percent drop in U.S. buyers versus a year ago. Exhibitors reported satisfactory business on the whole, nonetheless, with certain stands booming. Wielding mostly stable budgets, buyers were on the lookout for novelty.

Jennifer Cuvillier, group style director at Le Bon Marché, lauded the show’s production, and the “strength of summer collections from current partners,” but failed to find any “new and exciting brands.”

No strong directions emerged among the jewelry collections, with themes running the gamut from industrial to tribal. Among retailers zeroing in on vibrant jewelry, Bloomingdale’s put in an order for French couture jewelry house Gripoix’s Land of Plenty line, based on colored squares of glass on chains. Gripoix owner and artistic director Marie Keslassy said the house, whose couture clients include Schiaparelli, would open a Paris flagship at Place des Victoires that also houses a showroom and atelier.

Milly Q, a Taiwanese fashion blogger with more than 80,000 Facebook followers and owner of the Accro jewelry store in New Taipei City, cited feather and graphic metal styles among leading jewelry trends, singling out Satellite and Isabel Michel among favorite collections. “Their designs are both on-trend and timeless,” she said.

In the bag category, canvas and straw styles — summer classics — were among the main draws, with a tribal theme also bubbling, including at Philippines-based jewelry brand Joanique that introduced handcrafted neo-tribal clutches inspired by the local MassKara festival. Bestsellers at one of the busier bag stands, Muun — whose straw bags are designed in Paris and made by hand by a cooperative of women based in a village in northern Ghana, Africa — included the petite George style with black grosgrain ribbon strap.

Julia Pettit, head of retail operations at Pickett in London, flagged blue among key colors for the season, saying: “It’s still all about very small bags and exotics.”

Katy Cheng, founder of Taiwan-based lifestyle fusion boutique Katy Has a Loft, was among buyers crowding the booth of French bag brand Zacaria, whose wicker designs are produced in a family atelier in the Philippines that has existed since 1925. Hit styles included an abstract Darth Vader backpack and a disc-shaped bag inspired by the architecture of Oscar Niemeyer.

Tila March launched a men’s leather goods line at the event, inspired by its Zelig range. “We had men buying the Zelig in Japan and I had so many requests from people saying it makes sense to launch men’s as our bags are so functional,” said founder Tamara Taichman, who will also launch an eyewear line for the spring 2016 season.

The custom trend was percolating, with brands looking to boost sales by adapting to clients’ specifications. At French leather goods brand FirstofTulla, bestsellers included customizable stonewashed cotton totes splashed with colored paint with handmade chain handles. The bags are produced in Morocco by a small factory that also works with Jérôme Dreyfuss.

“We’re taking them without the chain handle, it’s great to have such flexibility. They’re chic but casual and go with anything,” said Sadahisa Okudaira, creative director of Johnbull Private Labo in Japan.

At family-owned French leather goods brand Le Facette, which has its own atelier in Brittany, clients could compose their own designs by picking and mixing from a range of panels and strips for the faces and sides of bags.

German scarf-turned-leather goods brand Loup Noir was handing out monogram personalization kits, while Maison Boinet, which launched a line of bracelets inspired by its belts, is planning a pop up at Le Bon Marché in Paris this month where an artisan will be on hand to add monograms to the designs. The house, dating from 1858, also introduced a line of small leather goods that latch onto belts.