Prices are heading north at many jewelers as improving American and Asian economies are drawing more consumers back to the high end. 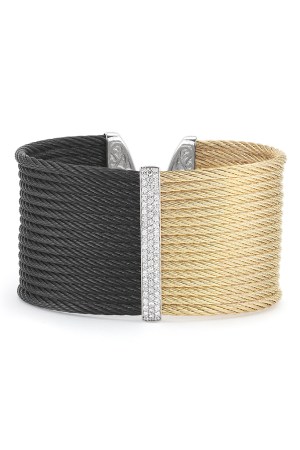 As exhibitors put the final polish on their gems for the Couture jewelry show, running May 27 to June 1 at Wynn Las Vegas, buyers should get ready for plenty of gold, geometric shapes, Art Deco motifs and splashes of color.

“The market in America the last couple of years has gone from strength to strength,” said London-based jeweler Stephen Webster. “We had our best year ever on Rodeo Drive and our best year in a long time for Neiman Marcus, two big indicators for the American market.”

While the collapse of the Russian market has brought challenges to his business, Webster said he’s not as dependent on that consumer anymore, particularly with the American market gaining stability and more selling in Asia. In fact, he’s focusing more on the highest price points. “One trend we have seen is much more activity in the $50,000-to-$100,000 range. “From Christmas leading into spring, we’ve invested more in that area. It’s a lot easier than selling 20 things at $10,000.” Webster’s colorful, mixed-stone collections have taken a shift toward the geometric with larger single stones rather than pavé. “They’re big looks, but less formal. Think of what ladies wear at Saint-Tropez at lunchtime.” Like others, he’s also doing more gold: “I think our Gold Struck collection will be our success story for Las Vegas.”

Even smaller jewelers like Nam Cho, who started her line in 2009, have found more customers at a higher-than-average price point. Cho said her diamond and sapphire baguette earrings and bangles look expensive, but are priced at what is considered the entry point for most high-end jewelers. “When I started out, people told me that the $5,000 to $10,000 range is tough, but that’s where I think the market is growing. It’s affordable for what it is.”

But Couture veteran Penny Preville, who has exhibited at the show for 25 years, said the fine-jewelry business has its challenges. “This season, it’s taken more strategic planning with our retailers and more of an effort to connect with the customers. The economy is improving slightly, but we’re competing with other luxury categories and consumers. It’s definitely a lot of work,” she said. Preville sees growth opportunities with her bridal collection as well as with mobile. The company is updating its e-commerce site to make it smartphone-friendly, though Preville said, “Soon it will be on their watches.” The retail sweet spot for Preville’s core customer is $3,000 to $5,000, though a growing number of younger customers, the daughters of her collectors, are spending in the under-$2,000 range. Newness includes more statement earrings, such as climber styles, and collars, chokers and long necklaces. While her garland motifs remain the most popular, she’s also designed celestial, Art Deco and lace groups for the show.

“Buyers are going after uniqueness,” said Greg Kwiat, president of the New York jeweler known for its diamond high-end jewelry. “We have seen retailers take risks with younger designers and be rewarded with space at the retail counter.” Kwiat, the family-run firm established in 1907, took a departure this season with its modern Madison Avenue collection, which incorporates black matte ceramic with white gold and diamonds. “We wanted to create something with a contemporary feel that would appeal to a client looking for some individuality,” he said.

For Los Angeles-based Arman Sarkisyan, creating more one-of-a-kind pieces has increased his business this year by 25 percent. “I find stores are reaching more for designer fashion jewelry, where it’s not as much about the name or the price. Buyers will say, ‘Show me what’s not commercial,’ so we are changing the business as a result of this,” he said. Arman lockets start at around $2,500 and average about $8,000 to $12,000, though some pieces run as high as $200,000. He’s also changing his signature motifs — typically Gothic and Renaissance — to more Art Deco, and he’s using faceted as opposed to cabochon stones.

Some of the most familiar names at the show are under new ownership. In June, Judith Ripka was acquired by Xcel Brands and Hearts on Fire was bought by Chinese giant Chow Tai Fook, the world’s largest jewelry retailer, in June. Hearts on Fire has paused its retail expansion in the U.S., where it has stores in the King of Prussia Mall in Pennsylvania and the Forum Shops at Caesars Palace in Las Vegas, in order to focus on opening stores in China. About 80 percent of its business is wholesaling to independent jewelers in 32 countries. At the same time, HOF has been growing its presence steadily in the fashion category to capture more red-carpet and editorial coverage. To that end, the latest collection features mixed metals, lacy, layered designs and of-the-moment pieces such as ear climbers, crisscross rings and pieces with detachable elements. With its business spanning the globe, omnichannel remains important to encourage customers to buy wherever they are. “We know that elements like live chats and in-store technology are helping our retailers close at the counter,” said chief marketing officer Caryl Capeci. “We’re looking to elevate visibility with ‘brand boutique’ environments that are like shop-in-shops.” The brand also expects to reveal a design partnership at the show.

Among the 40 or so jewelers showing at Couture for the first time is Pamela Love, who launched the fine-jewelry portion of her business last year. “A lot of the industry may not even know we offer fine jewelry,” she said. “Financing a fine-jewelry business is very challenging, as the cost of materials is far higher. We really had to take our time and set aside funds to launch the collection. It is also a leap of faith. If people don’t love it, if it doesn’t sell, it would be a big loss, financially. However, I believe this is the direction my brand needs to go in.”

While the show can be a springboard for brands, it’s also a means of reintroducing established ones. The 30-year-old Italian house Vhernier, which has boutiques in Miami and Beverly Hills, is returning to the show after 10 years. “We have concentrated our U.S. expansion with Saks Fifth Avenue and Neiman Marcus and now we want to be reintroduced to more of the market,” said Anna Maria Castracane, vice president of Vhernier USA. “We value the American market very much, but the show is also becoming more international with buyers from Hong Kong, Mexico, the Caribbean and Canada, so this is a good opportunity.” The brand will introduce two collections: Eclisse, an oversize ring and earring featuring dramatic stones cut down the middle, and Plissé, which represents a departure from the brand’s signature smooth metal look. The surfaces are angular like origami or wrinkled fabric, accented with pavé diamonds. Vhernier also produced a special piece in titanium as an entrant in the Design Awards’ innovation category.

Many brands cite a self-purchasing woman seeking everyday jewelry as their target customer. That’s also true at San Diego-based Alor. With a core retail price point of $800, Alor’s twisted steel-cable bracelets have become a category of their own. Principal Ori Zemer, whose family manufactured jewelry for Charriol for more than 20 years, said he’s trying to keep the balance between classic styles and newness to attract younger customers. “That’s important to reach that Millennial out there. We keep our styles traditional, but want to attract that new 25- to 30-year-old who’s looking to buy her first piece of fine jewelry, but make it fun.” To set their product apart, Alor is using colorblocking (the steel is heated in a PVD process that changes color from silver to shades of yellow, brown and black) to add newness to traditional styles, while a new collection also showcases more delicate pieces incorporating the cable.

Couture stalwart Chimento, known for its sculptural gold cuffs, has added more stacking bracelets that women can buy for themselves and wear every day. “We try to make an entry-level item up to a statement piece to cover the entire range,” said president Federica Chimento, whose product ranges in price from $1,500 to $40,000 and higher. The collections, called Velvet, Olympia and Supreme, come in all shades of gold, but Chimento said yellow gold is still the most sought-after look. “People like to see that shine, especially if there aren’t a lot of stones.”

Yellow gold has always been the signature look for brands like Marco Bicego and Gurhan. “I’d say of industry trends, the return to gold is number-one,” said Gurhan president and chief executive officer Fiona Tilley. “Our focus is the $3,000-to-$10,000 range, but we’re also making sure we have entry-level product for the aspirational customer who is returning to the market.”

The brand is known for its long, layered necklaces in 24-karat gold, but this season includes lariats, charm necklaces and bracelets, as well as rose-cut rubies and sapphires and diamond slices. Bicego’s hand-textured gold pieces make up 80 percent of his business. “It’s comfortable and looks good from day to night. I don’t think anyone wants to spend a lot of money on something they are going to keep locked up in a safe.”