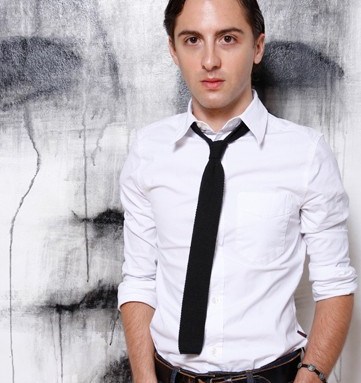 Chances are the Far East-themed Marchesa show next week will have little in common with the 3.1 Phillip Lim outing — nor, for that matter, will either have much to do with Camilla Staerk’s presentation, an ode to fellow Dane Karen Blixen. Take a close look at their program credits, though, and one name will pop up throughout: Eddie Borgo. He has created all the jewelry, as well as that for up-and-comers Frank Tell and Jen Kao. But Borgo knows not to bite the manicured hands that feed him and, while he lets slip that the Marchesa pieces were done in collaboration with jeweler Pamela Love, he’s tight-lipped on the actual designs. At any rate, he has better things about which to dish: Borgo is also launching his own line of finery.

Priced wholesale from $90 to $600, the Eddie Borgo collection skews decidedly edgy and punk. Leather cuffs are outfitted with a miscellany of studs, while rings are shaped to look like bent nails or tiny, toothy bear-traps. “I grew up listening to the Rolling Stones,” says Borgo, 30, to explain the rocker vibe. For this, he has his parents to thank — both were music buffs. To wit, the household pet in Borgo’s Atlanta, Ga., childhood home was a cat that his mother named Sabbath (naturally, it was black).

There’s another strong influence at sway here, however, and it isn’t familial. “I’m very inspired by the world of stylists,” he says. “I’m collecting magazines constantly. I look at every editorial.” Borgo’s also very rooted in this circle. He’s been a stylist himself, is best friends with one (Jamie Rosenthal) and is dating another (Keegan Singh). And he’s made a career doing work for industry heavyweights such as Patricia Field and Patti Wilson. “I first got involved in jewelry design five or six years ago because a friend, who was working for Diesel Style Lab, needed someone to do runway jewelry,” Borgo explains. “It was my first go at it. Then I started getting contacted by editors to do jewelry for shoots. It just kind of snowballed.”

In fact, many of the pieces in his own collection stem from designs he’s done for others. Those nail-shaped rings? The idea came from a project he did for a magazine shoot styled by Wilson. “She wanted industrial jewelry,” Borgo recalls. “I went to the hardware store and started looking at pipes, plumping connectors, nails, bolts and nuts.” His dramatic quartz pendant necklaces, meanwhile, originated from a pearl series he did for an old Karl Templer shoot.

“It’s a different world designing on your own versus working with a designer,” the jeweler notes. All of which isn’t to say, however, that Borgo is abandoning those collaborative efforts. “These different editorial projects challenge you,” he remarks. “You work with materials you would have never worked with and develop new ideas. The inspiration that’s brought to me by these stylists, it’s part of why I’ve thrived as a jewelry designer.”