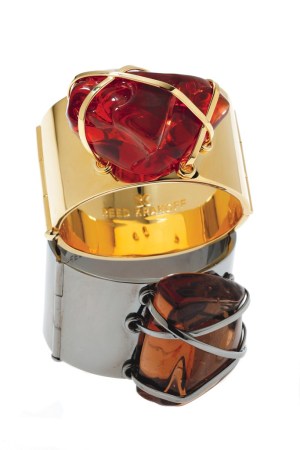 The idea came to the designer while he was working on a limited-edition bottle for his fragrance with Italian glassmaker Seguso. At the Murano factory, Krakoff noticed all the excess involved in the hand-blowing process. “I saw all these bins of glass — extra chunks that are essentially pieces that come out of the molds, thrown in a bin to be reused,” Krakoff said. “These were amazing objects. They looked like raw, uncut semiprecious and precious stones and I had this idea. I thought it would be great to repurpose them.”

And so Krakoff had the glass scraps shipped to New York, where they were treated and refined without losing any of their character. The glass stones — both clear and in striking tones like purple, cognac and blue — were then wrapped graphically in gold, gunmetal or silver-plated flat brass metal wire. Some became pendants on leather cords, others were set into bold rings and cuffs. The overall effect is almost brutalist in its rawness, which fits in with the spirit of the Seventies period that inspired the jewels. “When I think about the essence of punk design, it was very much a handmade, do-it-yourself, immediate expression,” Krakoff said.

The collection, which arrives at Reed Krakoff’s Madison Avenue boutique on Wednesday and will be available to select other retailers on consignment, ranges from $590 for glass stone rings set in silver or gunmetal to $990 for gold-plated cuffs.

Krakoff’s reinventions may not end here. “We’ll have another batch of them,” he added. “We are trying to use them in a minaudière, and playing with them in shoes as well.”