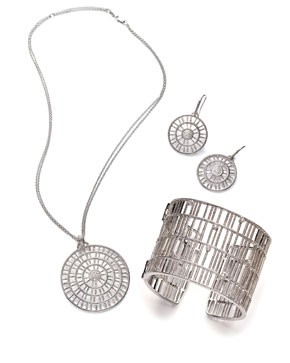 The big test has arrived.

The jewelry industry’s major shows are around the corner, and no doubt will provide a major barometer as to the strength of business for the rest of the year. Those preparing for this month’s trade shows in Las Vegas are wasting no effort to wow retailers with distinctive and fashion-forward styles. The Las Vegas jewelry fairs — including JCK Las Vegas 2008, which runs from May 30 to June 3; Couture 2008, running from May 28 to June 2, and ancillary shows such as JCK Presents Luxury and Premiere — are the most important shows of the year for jewelry brands and retailers. There are 3,100 companies showing at JCK and 220 at JCK Presents Luxury and Premiere. Couture is slated to have 248 exhibitors.

This year, jewelry companies across the board have raised prices 10 to 20 percent because of soaring costs for gold, silver and platinum. Metal prices have nearly doubled over the last year. Some companies such as Leslie Greene, Anthony Nak and Ippolita have launched silver lines to help bolster sales and make their products more accessible.

Slane & Slane, the 11-year-old, New York-based fine jewelry firm that has silver and gold categories, is pushing its new two-tone silver and gold collection to quench the customer’s desire for gold, but satisfy her with prices that are lower than all gold.

“It’s been a cultivating ground for new business for us,” said Marion Davidson, chief executive officer of Slane & Slane, which is launching nine new groups at Couture. “The mixed metal collection has become extremely important for us.”

Greene, who is known for her gold and diamond lace-inspired cuffs, romantic earrings and feminine rings that range in price from $2,500 to $20,000, launched her sterling silver collection earlier this year. Greene’s silver line retails from $120 to $1,900. The designer also is introducing a two-tone silver and gold line that retails from $650 to $1,900.

“The response to silver has been incredible,” said Greene, who shows at JCK. “We have many more appointments booked this year than last year. This show is going be very important.”

Other brands are continuing to focus on the high end. Ironically, the rise in gold prices has aided in making the metal even more precious — helping to justify its high price. H.Stern increased prices on a case-by-case basis, determined by material costs.

“What’s interesting is that, in some pieces where the gold is really showing, we continue to have demands,” said Ronaldo Stern, ceo of H.Stern, which shows at Couture. “People are more aware of the value of gold. It’s like diamonds — everyone knows the high value of diamonds and they want to show them off.”

Spanish fine jewelry firm Carrera y Carrera also is retaining its premium positioning with gold and diamond jewelry. From 2001 to 2004, the company minimized its distribution in the U.S. In mid-2006, the firm took a more aggressive approach in the U.S. and is now sold in 40 doors, including select Saks Fifth Avenue and Neiman Marcus locations. Carrera y Carrera is looking to further grow North American distribution.

The garb of a Spanish bullfighter inspires the brand’s newest collection. Pendants hearken to the embroideries on the bullfighter’s costume.

Select pieces will sell for more. Carrera increased prices a bit, due to the euro-dollar exchange rate.

“We have raised prices a little bit, but we have not followed the drop with the exchange of the dollar,” Guedj said. “That would be unbearable. It’s a real issue for the entire industry.”

Marla Sabo, president and ceo of Fragments, which has a jewelry and accessories showroom in New York as well as its own stores, said, “We’re optimistic going in, but everyone feels that [retailers] are making very considered decisions about what they’re buying.”

Fragments founder and chairman Janet Goldman said it’s all about product. “In these times, designers are very challenged to be creative because they have to sell,” said Goldman.

Pamela Froman, who won the JCK Rising Star Award in 2006, combines 18-karat green pink and white gold for an ombré effect, as seen on the fashion runways in recent seasons.

“I’m expecting to pick up new accounts and double sales from last year,” said Froman, who is showing at Couture this year.

Rosanne Karmes, owner and designer of two-year-old Sydney Evan, has created a new pyramid-inspired collection in gold and diamonds. Sydney Evan is available at Bergdorf Goodman and other U.S. retailers, but for this show at JCK, Karmes plans to expand internationally.

“I’m looking to open accounts all over the world,” she said.

Hearts on Fire, the Boston-based diamond jewelry company that offers accessible opening price points, is growing its upper end of the business with jewelry that retails from $20,000 to $75,000. Last year, the brand experienced a 100 percent increase in the category.

The company also has plans to continue to expand its business internationally into Russia, Dubai and Asia, where it already has several stores. Hearts on Fire president Mark Israel predicts that the company will see major increases in sales at Couture.

“People are so wrapped up in, ‘Gosh, it’s a bad economy and we’ve got to retract,'” said Israel. “What we’re trying to explain is that now the customer cares more than ever about value and getting what you pay for. In a down economy like this, that value is powerful.”