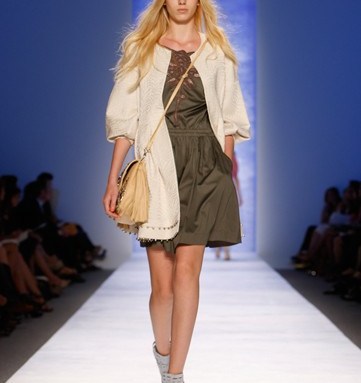 Rebecca Taylor, known for her flirty and feminine apparel, is expanding into footwear, jewelry, handbags and belts for spring.

Her 12-year-old namesake brand has signed its first licenses in the U.S. Peter Marcus Group, a new footwear company from the former owner of Bruno Magli North America, is producing the brand’s shoes, and diamond jewelry firm MJJ Brilliant is creating a line of jewelry. A limited collection of belts and handbags is being produced in-house. Several accessories were exhibited at Taylor’s spring runway show on Thursday.

“It’s something that we’ve been wanting to do for a long time,” said Taylor. “Every woman loves shoes and handbags. We didn’t want to start it unless it was in a very meaningful way.”

Beth Bugdaycay, partner and chief executive officer of Rebecca Taylor, projected that accessories would account for 20 percent of sales within a year. In two years, she anticipated that number to climb to 35 percent.

The accessories meld a pretty look with a bit of urbanity. There are 18 shoe styles, ranging from flat sandals to a cutout desert boot on a heel. Footwear will range from $300 to $400 at retail, consistent with the brand’s ready-to-wear prices. The jewelry, with 50 styles that range from $150 to $300 at retail, incorporates motifs such as sequins, flowers and stars rendered in rose, yellow and white gold tones.

The bags include a cross-body satchel encrusted with crystals and metallic bits. The belts are made of worn-in-looking brown leather embellished in Taylor’s feminine style.

There are plans to distribute the accessories where the apparel is sold. Bloomingdale’s, Neiman Marcus and Saks Fifth Avenue are targets, as well as Bergdorf Goodman and Fred Segal. Taylor also has a growing online business with e-commerce sites such as Net-a-porter.com and Shopbop.com. The firm has one store on Mott Street in New York and 55 stores across Asia. The accessories collection will be shown at Fashion Coterie, which opens Tuesday.

Bugdaycay believes the accessories will find footing among women who can’t afford to keep up with escalating designer prices. Contemporary brands such as Tory Burch and Marc by Marc Jacobs have burgeoning accessories businesses, but there isn’t much competition among designer brands on that level.

“It’s extremely important for this price point to offer a great design at a contemporary price point,” said Bugdaycay.