WWD ventured to Providence and surveyed the onetime "jewelry capital of the world" as it undergoes a revival — with brands including Tiffany and Shinola now manufacturing there. 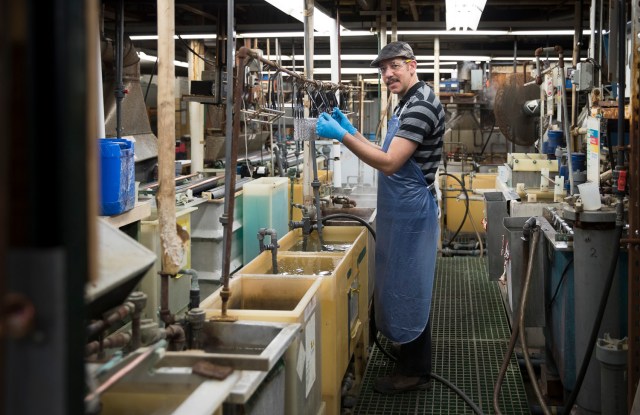 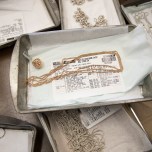 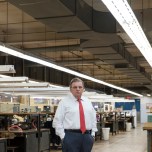 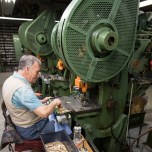 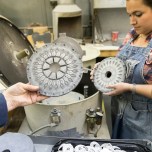 Rhode Island, once considered “the jewelry capital of the world,” is on the rebound.

In its heyday the state was a hub for costume jewelry manufacturing with an industry that traversed Providence’s outer reaches. But as with many industries, globalization had taken its toll. According to the Rhode Island Department of Labor & Training, the state’s manufacturing industry — primarily attributed to jewelry — employed 40,098 people in 1978. By 2015, that figure had shrunk to 5,723.

But in the last five years, a new movement for Made in America goods has helped stabilize the industry. Sources feel that this trend will continue to develop. Multiple sources estimate that the cost of Rhode Island-made jewelry is now only about 20 percent higher than Chinese-made goods.

Rhode Island Governor Gina Raimondo recently introduced legislation to help bolster the industry, offering subsidies for training in skilled manufacturing. And with President Trump’s Made in America trade agenda on the horizon, the Rhode Island jewelry sector could serve as a litmus test for trade renegotiation.

Rhode Island’s jewelry manufacturing is a nearly self-sustaining ecosystem — invisible to those not in-the-know. Stuffed into unassuming pre-war millhouses, their floorboards are worn to a sloping sheen and the sound of arcane machinery fills the air with a droning hum.

While factories’ appearances are subdued on the outside, their interiors yield a bustling scene of industry: machines stamp tiny charm findings and precious metal wire is punched into snake chain of varying widths. Other warehouses yield acres of untouched, closeout component merchandise — millions of backstock Austrian crystals and Sixties Lucite. Beads have been left untouched so long that crystals marked “Made in Occupied Japan” sit like precious rubble in 80,000 square feet of unrealized treasure.

“Slowly but surely a lot of people want Made in America, higher-quality goods. We’ve seen people migrate to Rhode Island. This is the hub of casting, plating, stamping beads. People don’t realize this is still here,” said Jim Simeone, director of sales at John F. Allen.

The crystal and bead supplier, established in 1889, sells to a gamut of consumers — from Etsy craftsmakers selling items for $50 a piece to firms clocking six figures. The company supplies new beads, and also owns a 20,000-square-foot warehouse filled with archival merchandise — offered at discount prices.

“About three or four years ago [business] started coming back — a lot of frustration with quality from overseas, manufacturing from overseas had a lot of issues, delays in delivery, quality-control issues, a lot of those people are here now,” he said.

China, it turned out for many brands, was not the bargain some had thought — with high minimums, deteriorating quality, late deliveries and rising labor costs stalling collections, they say. Providence — an under-four-hour drive from New York City — offers proximity, ease-of-access and quality control that Chinese factories do not, according to designers.

“The quality is fantastic, they do such a great job. I think that the chain factories, the finding factories are on par with Italy,” said designer Pamela Love, who partially manufactures her line in Rhode Island.

Tiffany & Co., David Yurman, Shinola, and Jennifer Fisher are also among the firms currently manufacturing in the state. Alex and Ani, the estimated half-billion-dollar brand founded by native Rhode Islander Carolyn Rafaelian, has established its name on Rhode Island-made goods.

While Rhode Islanders say that the industry was cutthroat in its heyday, the state’s present fight-or-flight condition has sparked camaraderie among manufacturing houses. Companies will drive their products to the next stop in the production line, meaning a finished product can be made within a 25-minute radius. John F. Allen will often collaborate with neighboring, heritage establishments as a service to its clients.

One such brethren is Salvadore Tool & Findings, a manufacturer of stamped findings and molded metal founded in 1945 that claims to be the “largest stamper in the U.S.” It is located in a former Drake’s Cakes factory built in 1928 and is now under the operation of husband-and-wife Kimberly and Steve Salvadore — who have recently created items for Marc Jacobs, among other brands.

The company’s stampings — intricate molds that are punched onto thin brass to display decorative tooling — can date back to 1891. This craft, said Steve, has kept the company in business. “The death of a lot of stamp companies happened when the businesses wound down. They let go of the toolmakers. Most people eventually have to do maintenance, and a lot of companies couldn’t maintain the tooling [as a result]. Eventually that’s the death of the company,” he said of the company’s resilience.

“A lot of individual designers are not wanting to meet the large minimums [in China] and then waiting for [merchandise] to go on the water, and then when it gets here it doesn’t always look like the prototype. Our typical customer is the little people. We deliver almost immediately and if we’re out of stock, in two to three weeks,” said Kim Salvadore.

Stories like Salvadore’s dot the Rhode Island landscape. Wiremaker Millard Wire and Specialty Strip — established in 1942 — has survived the U.S. jewelry manufacturing downturn by branching out into piano wire production. Lapidary of 45-plus years Richard Hegeman cuts and services gemstones in his boutique, Hegeman & Co., located on Providence’s East Side near the Rhode Island School of Design. Hegeman considers himself “the last lapidary in New England,” and his boutique sells many of the stones he has hand-cut, set into one-off jewelry designs.

These small enterprises run counter to the region’s behemoths. Warren Buffett-owned Richline Group, a jewelry manufacturer, operates a headquarters just 15 minutes over the Massachusetts border in the town of Attleboro. Alex and Ani is based in the city of Cranston, R.I.

Said Rafaelian: “The backbone of Rhode Island manufacturing was the jewelry industry. This was our pride and joy, our claim to fame. We were the jewelry capital of the world and it was stripped from us for cheaper labor overseas. It affected the entire state economy, morale, everything.”

Rafaelian grew up in the industry. Her family founded the Cinerama factory, where she began her own brand’s manufacturing operations. Alex and Ani has since grown to manufacture in factories across the state. “Here comes a company that has never left the state. Even the paper we use has to be made here. I didn’t do this to become a thing. It’s inherently my DNA, I love the state so much and it has an amazing amount of potential,” she said.

Said the firm’s president James H. Roberts: “Right now on the [fashion jewelry] side [China] is maybe 20 percent lower than us — not half our price. Their products are nowhere near the quality of our product, or the design.”

Like many other Rhode Island manufacturers, Armbrust reorganized its executive team in the last five years to adapt and modernize. Chief operating officer Skip Waite joined the company in 2010 from the aerospace industry to initiate a five-year plan that included the introduction of a fashion jewelry line. The collection, named Armbrust, launched in 2013 and is now stocked in 1,000 points of sale, primarily independent jewelers in the U.S. It has helped the firm’s overall business grow by 12 percent in the last five years.

Other manufacturers have brought technology into the fold, offering a hybridized mix of old-world craftsmanship and advanced processes.

“When we first started looking [at our costs] in 2011, we cost 40 percent higher than manufacturing overseas. Now with tariffs, shipping costs, labor going up in China, we are more likely in the 20 to 25 percent range and falling,” said chief executive officer Philip Montalto.

“R&D Manufacturers has grown by more than double since 2011, probably on pace to grow another 30 percent in 2017. The biggest advantage is not having to bounce from one geography to another, you can have an entire piece put together with proximity to New York,” he said.

Rhode Island, a historically liberal state, voted for Bernie Sanders in the Democratic primary. Post-election, it is a decidedly harried mix of Trump supporters and Trump opposition. In visiting with an assortment of manufacturers and suppliers, a similar sampling became evident.

Some — like those at John F. Allen — feel that import taxes will not help the U.S. economy. Judging from the lack of specifics in Trump’s trade agenda, it remains unclear if he will tax just finished goods, or all goods —  including raw materials.

Some Rhode Island-based companies like Wolf E. Myrow are crossing their fingers for raw materials to be slapped with tariffs too. The firm — established in the mid-Forties — is a multilevel, 80,000-square-foot warehouse of backstock beads, chains and crystal — some dating back to the Forties. The “job lot” is a full service of pre-made components. If import taxes are imposed, designers and brands could find inspiration and ample supply within the company’s archives, rather than commissioning newly-made components. “We are really counting on the new legislation,” said the firm’s manager Robin Allen.

Armbrust Chain’s Waite also considers revised trade as potentially fruitful: “If there are no duties on the Chinese it’s very difficult for us to compete. It reduces business from probably 50 percent of where it could be today. I don’t imagine [tariffs] would transfer so fast into the jewelry industry, but retail stores need to start selling Made-in-America.”

R&D’s Moltalto does not believe in placing import taxes on goods, but rather in offering incentives to companies manufacturing Stateside. “As tariffs go up, we create barriers,” he said.

Governor Raimondo is clearly a believer in the incentive model. The tax incentives she introduced in January to help boost the state’s jewelry industry provide manufacturers with tax credits, technical assistance, and vouchers to fund research and development. The Rhode Island Manufacturing Initiative bill also looks to train a new generation of manufacturing technicians – with an eye toward creating “thousands” of highly skilled jobs in the state.

“I think the nature of manufacturing has changed,” said Raimondo. “It used to be low-scale and labor-intensive and it was hard for Rhode Island and America to compete with lower-wage countries. But now things are changing. Advanced manufacturing on a much higher scale is more technical and more automated. More manufacturing like this is going to be done in America, because America and Rhode Island can compete very well with higher-wage, higher-tech labor opportunities. To make that happen we are investing in workforce training programs valuable to manufacturers, designers, welders, robotics, things like that.”

The governor conceded: “I don’t think you will ever see the same number of people employed in manufacturing because manufacturing is no longer so labor intensive. I think go up from where it is today and also wages are going up because there will be higher-scale jobs.

“I had a great life as a kid — my dad had a job at the Bulova watch company. Good jobs like his gave people dignity in their work. It’s important that Rhode Island gets this right.”