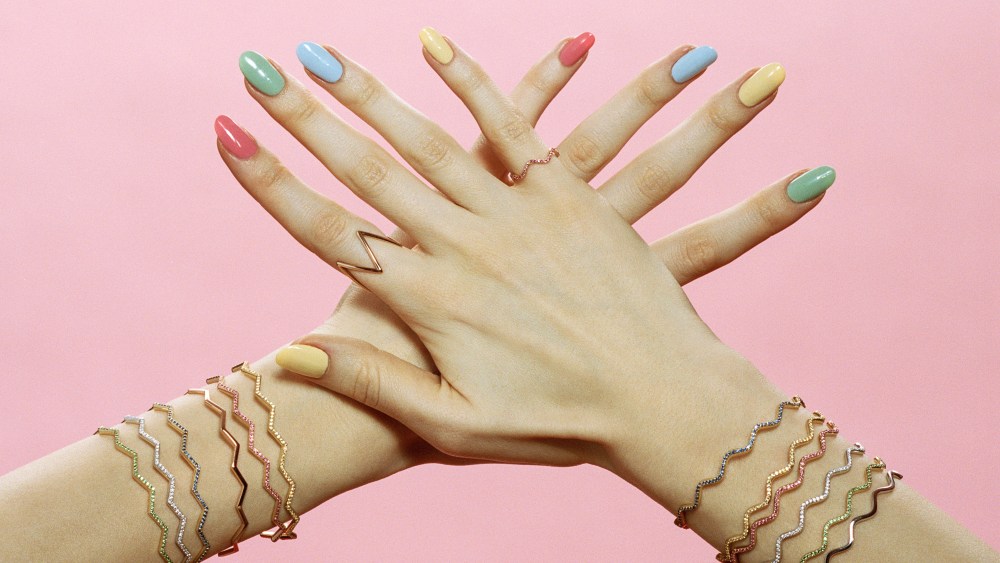 LONDON – Sabine Getty is taking a new, commercially savvy direction for her eponymous jewelry label with the introduction of a lower-priced line.

The new range, called Baby Memphis, is in line with London-based Getty’s vibrant aesthetic, which involves bright colors and asymmetric shapes inspired by the Memphis Group design movement. There are earrings and chokers in wiggle or zigzag shapes, done in solid gold or decorated with multicolored stones including topaz, sapphires and pavé diamonds.

“I really wanted to create pieces that could be worn every day, kind of like lingerie-jewelry,” said the designer. “Thanks to its price range, Baby Memphis can be more of an impulse buy and can very much become a go-to when looking for a gift. I hope that with this collection the younger customers can buy their own jewelry.”

Getty added that she wanted to recreate the signature zigzag and wiggle lines of her main Memphis collection into more dainty shapes that are easy to wear.

The launch of a more accessible line of jewelry is part of a wider shift in strategy for Getty, who also took a step back from wholesale last year and centralized sales at her new Berkeley Square showroom in an effort to establish a closer relationship with the consumer. The launch of an e-commerce shop is also in the works to coincide with the introduction of Baby Memphis.

“I want to create, but I also want to sell. This way, people who can’t afford the main line but still want to have a nice piece of jewelry can come by the showroom,” she explained. “At some point, the brand has to become profitable. Even if we’re artists, it has to make a profit.”

Getty, who has experimented with different sources of inspiration since launching her label – from medieval art to furniture, found that she felt most comfortable in the colorful, spirited world of Memphis.

“The Memphis aesthetic, as I see it, is playful, colorful and young. This is something I always try to implement in everything I do. The shapes of waves and zigzags create a range of infinite design possibilities,” she said. “Memphis at the end of the day is quite simple in its philosophy. You have to think like a kid, and that’s something I always do.”

A new campaign has also been created to accompany the launch. It embraces the positive, child-like spirit of the line and of Getty’s new experiences as a young mother, with unicorns, baby bottles, a pastel pink background and models with Purdey haircuts (the short, fringed style made famous by Joanna Lumley’s character in the Sixties British TV series “New Avengers”).

“Baby Memphis is also a reflection of a current time in my life where I have just had a baby girl and am very much inspired by all things pink, sweet, colorful and young. So, I wanted the shoot to be fresh, youthful and happy with a few references to motherhood and babies, as I was already nine months pregnant when we did the shoot,” said the designer.

“We used props that were actually bought for my daughter,” she added. “It’s very much about creating a story with fun and interesting characters, and not revert to the usual model shoot.”