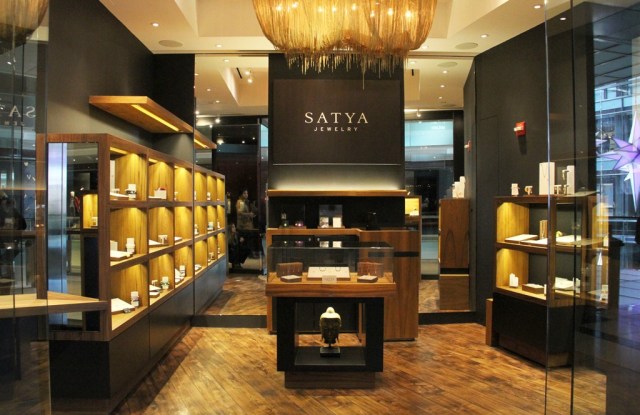 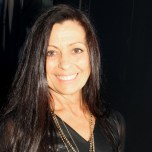 Satya Jewelry is moving on up — literally.

The New York-based jewelry brand is expanding from a ground-floor kiosk in Columbus Circle’s Time Warner Center to a full-fledged 368-square-foot store on the second floor. This latest door, which opened today, marks a re-branding for Satya. The company will revamp its three other New York stores, as well as the recently opened London store, to follow suit.

“People used to always write that [our stores] were like a little oasis in the city of New York,” said Satya Scainetti during a preview of the store. “We always had a sitting Buddha and actually used to have people doing little prayers in front of our windows before we’d open. We are still bringing in a little bit of the Zen, but it’s definitely more modern.”

The new boutique is located across from J. Crew and next to the newly redesigned Eileen Fisher store, just off the mall’s main escalator. A giant gold fringe chandelier hangs from the ceiling, with a walkway of smooth river stones toward the side. Inside walls are painted a sleek slate gray to off-set wooden display cases, which were handmade in New York. Inside the cases, which flank the perimeter of the store, pieces are arranged on elevated Lucite stands, which, according to Scainetti, “pops the jewelry.”

Current collections, including this season’s peacock line and the best-selling celestial line, are complemented by brand constants, including layering chains, small pendants and mala beads. In the center of the store sits a covered case featuring the more expensive 18-karat gold pieces, prices for which start at $398 for a small pendant necklace.

A small men’s selection is available, as well as several charity collaborations, including its recent partnership with charity:water, which donates $40 for every Oasis necklace sold. The necklace, a blue agate pendant, retails for $98.

Unlike most stores, displays are organized by gemstone color, rather than jewelry type, in order to highlight each stone’s spiritual meaning. Popular options include turquoise, the stone of healing and health, and emerald, the stone of love.

“I always encourage customers not to question why they are drawn to a certain stone,” said Scainetti. “Nine times out of 10, they’re like, ‘This is exactly what I need.’”

And those times it isn’t?

“We have men come in and pick out moonstone, which is the stone of fertility,” she said. “Once we tell them that, they go, ‘No way, get that away from my girlfriend.’”

Sales at the kiosk tallied $1 million annually, and the brand is aiming for the new store to exceed this figure. The grand opening will be capped off tonight with an in-store party hosted by Atlanta de Cadenet Taylor.