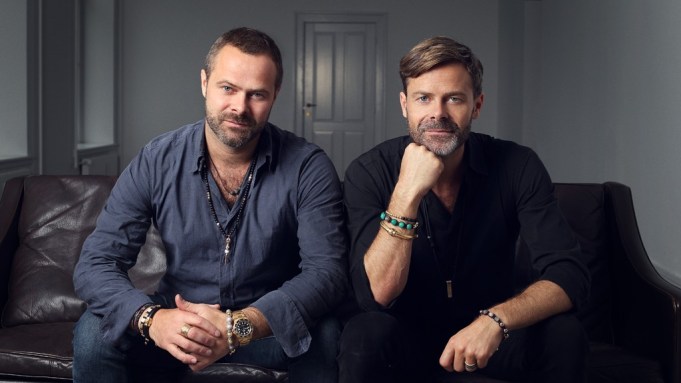 The 1,600-square-foot shop will be located at No. 7 Ny Østergade, between Stella McCartney and Bang & Olufsen’s boutiques and close to the Hermès store.

“The inspiration for our first flagship is between a yoga shala, which is a meditation hall for yogis, and a monastery,” said Shamballa Jewels’ creative director Mads Kornerup.

Designed by the Danish architecture firm SPACE Architecture & Interior Design, the store has marble columns, wenge wood, a mosaic on the floor and a Shiva lingam stone hanging from the ceiling.

There is also a design room, a braiding atelier where customers can have a bracelet customized between 20 and 30 minutes and upper floors that will function as the company’s headquarters.

Established by brothers Mads and Mikkel Kornerup in 2005, Shamballa Jewels is best known for its bracelets inspired by prayer beads used for meditation.

Its best-selling item, said Mads Kornerup, is the classic Shamballa bracelet where pavé beads are strung together with the macramé style of braiding, priced between 5,000 and 10,000 euros, or $6,370 and $12,274 at current exchange rates. The prices vary according to the type of beads chosen such as raw diamonds, faceted diamonds, rubies and sapphires.

Shamballa Jewels is currently available in about 70 doors internationally. Distribution includes a mix of high-end specialty stores and department stores such as Neiman Marcus, Barneys New York, Vault in Miami, Harrods in London and Colette in Paris, as well as goldsmith shops such as Hartmann’s in Denmark.

The new flagship comes at a time when the company is in expansion mode, especially in Dubai, Qatar and Asia.

Shamballa is set to launch at Lane Crawford in Hong Kong before the end of the year. The brand’s full offer will be available for sale, in addition to a limited edition of four bracelets in four kinds of jades designed exclusively for the retailer.

“Our next expansion to Asia [following Lane Crawford] will possibly be Hong Kong again, where we are in negotiations with a retailer,” said Shamballa Jewels’ chief executive officer Mikkel Kornerup. “We are looking at Japan and Korea next.”

Simultaneously, he said the company is consolidating its presence in Europe and that it is targeting distribution of about 90 doors by the end of 2013.

Another move to bolster its presence internationally has been the appointment of Peter Normann Nielsen as chief operating officer, a new post. He will focus on the company’s operations and development strategy. Most recently, Normann Nielsen was vice president, design and brands at the Danish design group Rosendahl.

Mikkel Kornerup said he expects the company to generate revenue up to 13 million euros in 2012, or $16.5 million at current exchange rates, which excludes revenue from the U.S. operations. He said sales have been growing at an average rate of 20 percent a year since 2005, and that the new developments should accelerate that pace in 2013.