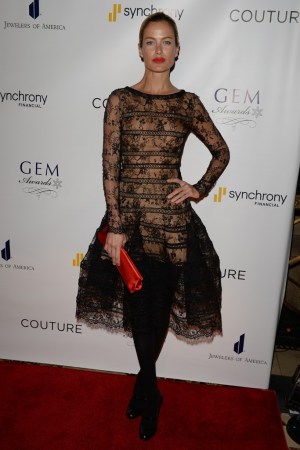 David J. Bonaparte, president and chief executive officer of Jewellers of America, opened the event, arriving on stage seated in a makeshift throne. “The Gem Awards honors achievements of individuals and companies whose work raises the visibility of fine jewelry and watches,” he began. “Together we are shaping the future of our industry. We may not agree on setting, size, cut or color, but when it comes to raising visibility and getting consumers excited about fine jewelry and watches, we can all agree that this year’s nominees are marquee.”

The first award of the evening, given for excellence in marketing and communications, was presented to Shinola, beating out competitors Forevermark and Tudor. The face of the brand, as well as the women’s design director, model Carolyn Murphy, took to the stage to accept on behalf of the team. “At Shinola, we are a community that thrives on excellence and spirit, and without that hardworking team in Detroit, the marketing would be absolutely meaningless,” she said. “A big thank you goes out to them — the watchmakers and craftspeople who make this a reality.”

Following Mata’s win for media excellence over fellow nominees Maria Doulton of The Jewellery Editor and Jack Forster of Revolution Magazine USA, the design award was presented to Webster. The designer, who beat out Alexis Bittar and Todd Reed for the honor, accepted the award with a speech filled with off-kilter British humor. “Despite the fact that I do everything myself, I’ve got a few people to thank,” he began. “I’ve got to thank my wife, because she’s here and she’s the only reason I leave the house in the morning. And I’d like to thank the American jewelry industry, who have been f—king amazing.”

For the final award of the evening, the Gem Award for Lifetime Achievement, Karen Katz, ceo of Neiman Marcus, took to the stage to introduce honoree Larry Pelzel, the store’s vice president and divisional merchandise manager, precious jewels. “I started my career as a sales associate — a very humble beginning,” Pelzel said, closing out the evening. “Selling jewelry allows me to have fun and make people smile, and that’s very important to me.”