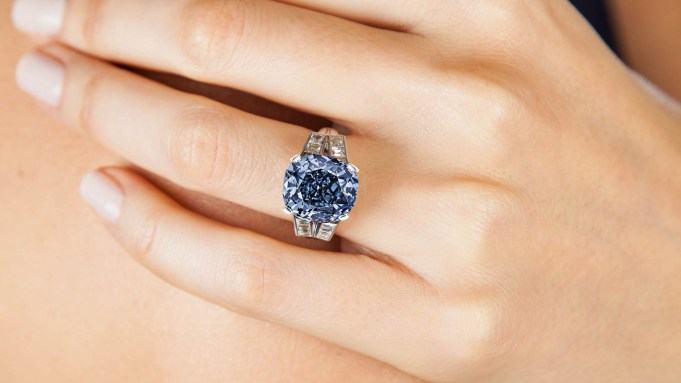 The “Little Princess” star’s father purchased the bauble to mark her 12th birthday in 1940, the same year that she starred in the film “The Blue Bird.” At the time, George Francis Temple paid just $7,210 (approximately $122,000 with current inflation) for the stone. When the ring is auctioned on April 19 at Sotheby’s spring Magnificent Jewels sale in New York, it is expected to command between $25 million and $35 million.

“She acquired it at the age of 12 and had it her whole life. This was a treasured piece of jewelry, she wore time and time again — we have pictures of her wearing it when sworn in as ambassador, when she was presenting an Oscar,” Sotheby’s New York jewelry sales director Frank Everett told WWD of the lot, which will lead Sotheby’s spring jewelry roster here.

The ring’s blue stone is “potentially internally flawless,” according to Sotheby’s analysis. It boasts VVS2 clarity, and is being auctioned in its original Art Deco-style setting. In 1972, Temple commissioned Tiffany & Co. to create a yellow-gold setting for the stone, which will also be included in the lot.

“It was a bargain, even if you translate dollars at the time because colored diamonds in general were just not as understood or sought-after as they are today,” Everett said of the stone. “With the low estimate of $25 million, honestly between the rare color and quality of diamond, it’s well-priced. These pieces are just not coming along in the way they once did. Then quality of the stone stands apart on its own and then you have the provenance.”

In November 2015, Sotheby’s set a world record for gemstone sales with a 12.03-carat fancy vivid blue diamond that realized $48.5 million in Geneva.

The Shirley Temple Blue Diamond will travel for exhibition to Los Angeles and Hong Kong, before being mounted for Sotheby’s Magnificent Jewels spring preview in New York — opening to the public for a four-day run beginning April 15.