The price of the precious metal is skyrocketing, and it shows no signs of waning, yet demand is higher than ever. 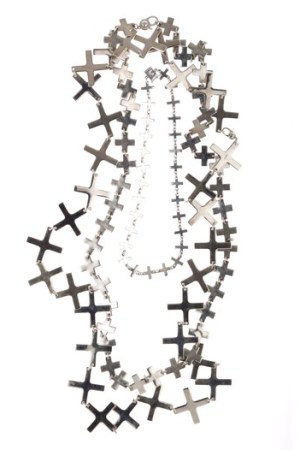 The price of the precious metal has soared and shows no signs of abating, but demand is higher than ever.

The World Silver Survey released April 7 projected prices to peak at around $50 an ounce in 2011 — they currently hover at just over $40 an ounce — a rate that would lead many to infer that negative implications lie ahead for retailers, suppliers and designers. But just the opposite is true, according to Michael Barlerin, director of The Silver Institute’s Silver Promotion Service, who said the 2010 survey results outpaced 2009’s on all measures.

“The results coming into the year were extraordinarily bullish, so if you think of it in terms of a year-to-year comparison, silver outpaced a record year on all measurements,” Barlerin said. “It’s not a short-term issue and it’s not linked specifically to the price of gold. It’s an exceptional set of circumstances. Silver’s demand and silver’s role to a retail jeweler also appears to be at an all-time high.”

The price of gold, which has seen a 250 percent increase in price since 2005 — more than tripling from just over $400 to $1,475 an ounce — also shows little indication of peaking. The current selling price, 18 percent higher than it was almost a year ago in May 2010 at a rate of $1,250 an ounce and 59 percent higher than the previous year’s rate of almost $930 an ounce — has caused brands to flock to the lower-priced precious metal.

This means that even in a further increasing silver price scenario, GFMS, a precious metal consulting agency that conducts the annual silver survey, still sees silver usurping some of the positions that gold jewelry previously held in the U.S. market.

Designers and brands known for their silver craftsmanship and accessories, such as Judith Ripka, Stephen Webster, Robert Lee Morris, Pandora and Thistle & Bee, have all seen growth in the precious metal category despite soaring prices, which can also be credited to several societal factors, said Barlerin. These include a preference for white metals, particularly for female self-purchase. Silver is also highly giftable, especially among the 20-to-30-year-old demographic, and its “highly wardrobable” nature allows for wearers to merchandise themselves with multiple silver looks at once.

“Silver is modern and rugged-looking, and it’s a metal that works well in that category,” Winter said. “You can make it a little heavier and you can blacken it a little bit, and I think there’s a lot you can do to it that appeals to men. The silver also lends itself to other categories because you can be polished, shiny and sophisticated, but you can also be rock ’n’ roll.”

Philip Newman, research director at the U.K.-based GFMS, attributed silver’s success in part to the high price of gold. In the gold category, the demand is primarily based in a more price-sensitive market, including regions such as India, East Asia and the Middle East, but for silver most of the demand is concentrated in the Western market, where the markup is higher.

“That has really given an opportunity for silver to gain showcase space,” Newman said. “A lot of the major retailers carry more silver jewelry than they used to 12 to 18 months ago. Silver has done relatively well in a number of markets, and the trend is growing, especially with designer and branded silver.”

“In anticipating price sensitivity to gold and overall market trends last year, we fortified our sterling silver collections, offering consumers a wider range of styles and price points,” Jayson said. “These new items…have been well received by consumers on a national basis. Our retail partners have expressed how cohesive their jewelry cases look and feel from a merchandising perspective.”

Luxury sterling silver brand Thistle & Bee has also seen double-digit growth in the past year, even with silver prices doubling from $18 in August to the current price of over $40 an ounce. Thistle & Bee is carried in more than 500 high-end independent retailers nationwide such as DeNatale Jewelers and Jewel Box in New York, Lux Bond & Green in Connecticut and Tiny Jewel Box in Washington, D.C., and does not target department stores. McLoughlin noted that retailers that have never carried the precious metal before are eager to carry the line.

“We have always been in silver, it’s our specialty, it’s not the half sister of a gold line,” said Jodi McLoughlin, chief designer and marketing director at Thistle & Bee. “We’re finding that people are willing to pay for quality. Consumers understand the fine design and quality, and that they’re not only making a fashion statement with sterling silver, but these are bold, solid and weighty pieces that will last for a while. A lot of people that are looking for luxury understand the difference between inexpensive sterling product and something that’s actually luxury.”

There are about 500 pieces in the brand’s offerings that span nearly 10 collections, and the broad price range goes from $250 to $1,500. Most recently, Thistle & Bee’s designs were featured in Ruffian’s fall show during New York Fashion Week in February, along with Robert Lee Morris.

Robert Lee Morris said that although his wholesale prices have been altered carefully, retail pricing has yet to catch up with the silver spike. Opening prices for his silver jewelry start at $110 to $150 and can go all the way up to $3,500, although the bulk of the pieces retail under the $500 range.

“What we sell most of are the very classical, wearable things. Those won’t ever be that expensive, even if silver goes up to $80 an ounce,” Morris said. “As the price of silver goes up, it’s just going to be wonderful because silver will have evolved in front of our very eyes as a very being.”

On Tuesday, QVC will unveil the Robert Lee Morris for Andy Warhol line, a 16-piece sterling silver collection with an opening price of $49. The 18-inch “Ode to Spring” necklace, which will retail for $255, is comprised of cut-out poppy flowers, butterflies and bugs that are exact replicas of Warhol’s drawings in the Fifties, and each piece is engraved with a photo and quote from the artist.

Stephen Webster’s collection, predominantly fine jewelry at its inception in 1996, has seen its silver category steadily increase the past two to three years. The company now depends on the precious metal for more than 50 percent of its sales, said the designer, adding that it’s gold that continues to be a struggle.

“The silver business has been very buoyant,” Webster said. “Even if a product that’s between $300 and $2,000 at retail goes up in price, we’ve not yet seen the clients dropping off like we did with gold.”

He’s seen a big shift in the industry, and retailers that once only purchased edgy, gold pieces from Webster’s line are now moving toward more silver-based items. That said, the designer is clear that he has no intention of shuttering the production of his fine jewelry. He’s just had to adapt to meet the demands of a changing consumer and a more cautious retailer.

“You have to look at [silver] as a viable option to a material, such as gold, for instance,” he said. “If you started to make jewelry in steel, brass or titanium, you would still have to convince consumers why they should purchase it. But consumers don’t question silver because it’s a precious metal. Even when silver prices are at an all-time high, it’s still a fraction of the price of gold. The consumer understands it’s not gold, but they don’t need convincing that it’s some alien metal they’ve never heard of.”

But perhaps it’s Pandora Jewelry, where silver accounts for 80 percent of the business, that has seen the most growth in the sector, boasting a 92.6 percent global revenue growth from 2009 to 2010 to almost $1.3 billion. Silver feeds the affordable luxury trend, which is part of the brand’s DNA, said John White, managing director of Pandora North America.

“It costs more to produce and costs more for the retailer to buy from us right now,” White said, emphasizing that the company is at an advantage because of its position on the value chain. “Most other jewelry companies operate through middlemen, but we’re completely integrated. We produce all of our designs in-house, and all jewelry is produced in company-owned factories. We also distribute primarily through Pandora-owned distribution companies, such as Pandora North America, which is part of Pandora Jewelry’s global company.”

White said it’s only natural that when the cost of materials rise, those prices find their way up the value chain. Despite this, the brand’s revenue per store grew more than 50 percent in 2010 and Pandora North America’s revenues increased 87 percent.

However, Tiffany & Co.’s silver business has seen a decrease in the past year domestically, according to Paul Lejuez, managing director and senior retail analyst at Nomura Securities International. He attributes this party to the fact that the brand’s typical silver consumer is a trade-up customer and not a true luxury one who might purchase diamonds, platinum or other fine jewelry.

“It’s one of those categories that will be pressured by commodity cost increases — and silver has certainly been up a lot — and [Tiffany] doesn’t have the pricing power on lower-priced silver items that they do on higher-priced categories. The buyer is just not as willing to pay up for that item [silver],” said Lejuez. “It’s been more of a struggle. They’ve had a better time hanging on to their more affluent customer base than attracting the trade-up customer that they may have lost during the downturn.”

But Kimberly Greenberger, managing director and senior retail analyst at Morgan Stanley, said the retailer is well equipped for handling inflation and rising commodity prices, and that while the amount of units purchased might have declined, actual revenue has increased due to stronger pricing in many categories.