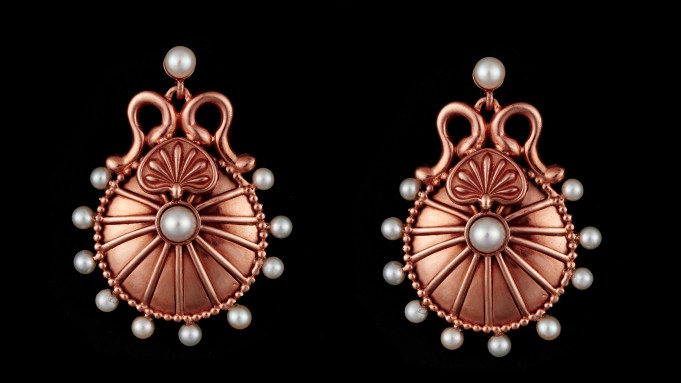 MADE IN GREECE: Sophia Kokosalaki, the London-based designer whose namesake label focuses on bridal wear, is expanding her offer with the launch of her first jewelry line.

The designer has previously collaborated with Athens-based goldsmith Lalaounis on a capsule collection, sold exclusively on Net-a-porter. For her inaugural jewelry line, Kokosalaki has created pieces inspired by her native Greece.

Drawing on references from Greek mythology and the country’s architectural landscape, the pieces feature minimalist, clean lines and charms shaped in the form of harps, lunar disks and the Neman lion.

Highlights include a pair of drop earrings embellished with freshwater pearls, a gold anklet and a sleek cuff featuring knotted panels made to resemble the Gordian knot.

Kokosalaki said the sculptural nature of the design process was satisfying and she was attracted to the seasonless nature of jewelry.

“It doesn’t have the ephemeral nature of clothes. You may try to create timeless clothing all you like, but there is always that notion that it is last season’s work, six months later,” she said. “Jewelry is truly timeless, it doesn’t date and nobody cares about the season as along as it is beautiful and impeccably executed.”

Prices range from 150 pounds, or $210, for a silver or gold-plated bracelet to 1,500 pounds, or $2,100, for a pair of earrings made of 9-karat gold. The designer said by producing the collection in Athens, she’s able to maintain a competitive price point.

The collection, which is selling at Valery Demure’s Paris Fashion Week showroom, will be available to purchase at retail in July.