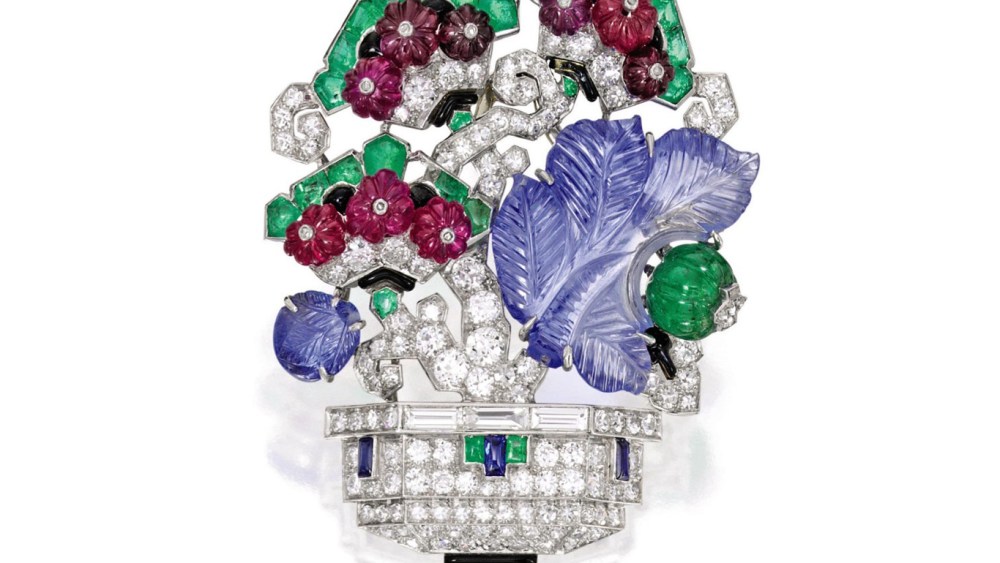 NEW YORK — The results from the December jewelry auction cycle here highlighted a continuing trend in the market toward more casual pieces of high design.

According to international specialists at Sotheby’s and Christie’s, bidders’ interest in signed design pieces from the Sixties and Seventies — including those made of semiprecious stones — has strengthened considerably. Christie’s Dec. 10 Magnificent Jewels sale brought in $59.7 million, more than $9 million above its estimate, while Sotheby’s Dec. 9 Magnificent Jewels sale took in a total $52.3 million, on par with its pre-sale estimate.

At present, the American collecting market is divided between two camps: The usual contingent of those seeking outstanding gems, and a newer group looking for exceptional signed pieces of high design, with a more casual bent — one that is willing to shell out high prices even when the jewelry isn’t chock full of mega-diamonds.

While large, precious stones continue to command record prices, less precious but rare examples of Cartier, Bulgari, Van Cleef & Arpels and Jean Schlumberger, among other haute joaillerie houses, are selling at far beyond their highest estimates — for much more than their raw components’ value.

At Sotheby’s, an 18-karat, colored stone, and diamond necklace and ear clips set designed by Paloma Picasso for Tiffany & Co. fetched $478,000. It was originally estimated to sell from $125,000 to $175,000, and is largely comprised of semiprecious tanzanite, tourmaline, topaz, peridot and rubellite stones.

At Christie’s, a colored stone, gold and platinum necklace by Jean Schlumberger for Tiffany realized $725,000. It was originally estimated to bring in between $200,000 and $300,000 and is largely set with topaz, tanzanite, amethyst and citrine stones.

Tom Burstein, senior vice president of jewelry at Christie’s, said of the continuing shift in attitude: “People are really taking jewelry as they should and looking at it as a design object in the same way one doesn’t take a sculpture and strip it down to its components. A lot of these pieces are from an important time and are not made anymore — it just needs to be looked at as an object as a whole.”

He said the current collector looks at four criteria before bidding: “Signed jewelry, but not only is it signed it has to be very representative of the brand; it also has to be wearable and comfortable, and it has to be well-made.”

Colored stone pieces, according to the auctioneer, have found popularity among younger buyers aged 25 to 40. “If you look at the new Gucci ads, it’s a changed feeling — they have warmer tones and it’s a less tapered look. I think the Sixties and Seventies are in, in a big way. Jewelry that does well has the same warm sensibility.

“Something about it reflects the style of today’s clothing — people may have worn heavier brooches on a Chanel jacket or St. John knit but now they are wearing cashmere and silks and don’t want something so heavy. It’s looking for something with a casual appearance that is still considered fine jewelry,” Burstein said.

He was careful to stress that while colored stones have a lower wholesale value than diamonds, “even to get an aquamarine out of the ground is so difficult, and to polish them is very hard.”

Sotheby’s sale’s top lots were populated by remarkably rare diamonds and sapphire baubles. But the bulk of the  sleeper hits were, again, rare signed pieces often comprised of semiprecious materials.

An exceptional example is a diminutive Cartier brooch shaped like a dachshund, largely made of yellow gold and citrine that sold for $43,750. It was originally estimated to bring between $10,000 and $15,000.

Schuler said while these lots’ raw components amount to nowhere near their hammer prices, their designs could be considered arresting representations of their makers’ historical legacies.

He added of the casual mood — which, according to both him and Burstein, has been building for nearly two years — “There is this desire to own wearable jewelry – things that are more daytime and more casual in nature. The theme is one of wearability — fun, easy pieces you don’t have to think about too much.”