LONDON — Twenty-five years ago, Stephen Webster designed Crystal Haze, a fine jewelry collection that was all about mesmerizing color, precious stones in all their natural glory — and unusually chunky cocktail rings for women.

It was partly thanks to those rings that the then-fledgling label took off: Madonna bought a silver obsidian one, was photographed next to Guy Ritchie wearing it on her index finger, with bucket loads of attitude and from then on, Webster’s rock ‘n’ roll spirit and designs soared in popularity.

“At the time, women self-purchasing jewelry was still new, fine jewelry was still a boys’ club. But the Crystal Haze rings were a more reasonable price and we mainly had women buying them for themselves. It was a wardrobe piece, they weren’t wearing it because they were engaged,” the designer said. “My favorite piece of jewelry has always been a cocktail ring. It’s a celebration of life and comes without any baggage or commitments.”

Two and a half decades on, Webster is bringing back the “ring that changed [his] life” and the broader Crystal Haze range, which has now been re-christened as “CH2.”

There was a launch planned at Bergdorf Goodman for later this month, one of the first stores that had shown interest in the collection, but given the current lockdown measures and worldwide closures of department stores, Webster took a different route: Make the launch a real family affair and present the collection via Zoom, alongside his wife Assia, daughter Amy and some mouth-watering “Hazy Daze” cocktails.

“This is Lockdown Websters. When we’re not cutting each other’s hair, we try to go on as normal,” said the designer, who kicked off the virtual meeting with a quick cocktail-making class at the “No Regrets” lounge of his family home, featuring a stocked up bar, stylish silver ware and a “No Regrets” neon sign, that was previously making the rounds at his boutiques across the U.S.

The cocktail was a mix of lemon juice, Crystal Head vodka and Blue Curacao liqueur that mirrored the color of the large turquoise stones on the cocktail rings.

“It’s like a swimming pool on your arm,” said Webster’s wife Assia, who had a clear soft spot for the large cocktail rings.

Amy, who is the younger addition to the Webster team and had been the one urging her father to reimagine Crystal Haze for her generation, pointed to a new addition of more subtle, day-appropriate stacking rings which allow customers to play with mixing colors and stones. 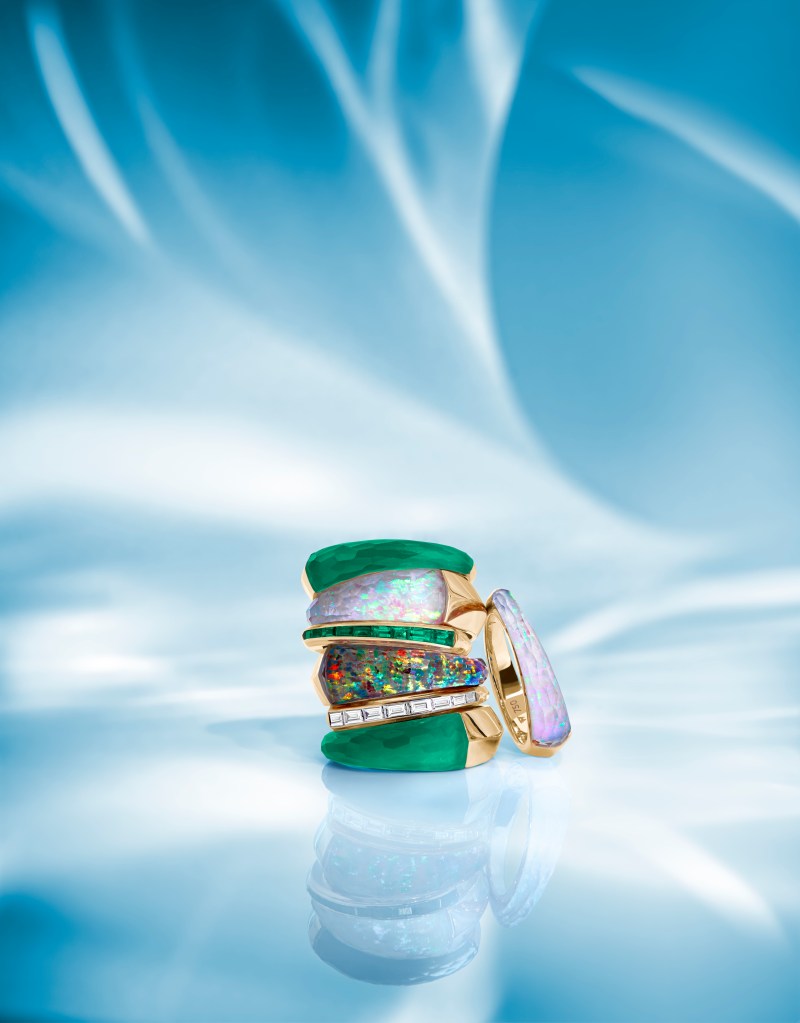 The collection also includes drop earrings and pendants featuring sharply cut stones, in line with the natural shape of the crystal; clip earrings, as well as stackable bangles. Webster has mainly used turquoise, white opalescent and falcon’s eye for the launch, but plans to introduce new stones and colors every season.

His aim was to stay as close to his original concept as possible and just delve further into his love of fine materials by using stones with less regular facets and going the extra mile to source everything himself.

“It’s about the journey from something that was buried under the surface to something beautiful and sophisticated,” said Webster, sharing images of the big lumps of stones he sources at gem shows. “Beyond the intrinsic value, there’s the value of craft and design, in combination with the value of the material. We always wanted to add some of these other elements to make people more comfortable with fine jewelry. The moment we merged life with jewelry, that was the moment of democratization of fine jewelry.”

Prices for the range start at 1,900 pounds and the launch is slated for May 25, on Webster’s e-commerce platform.

“You can buy it and wear it as a celebration of anything — even going to your back garden,” he added.