Accessories trade shows continue to grow in importance and scale. 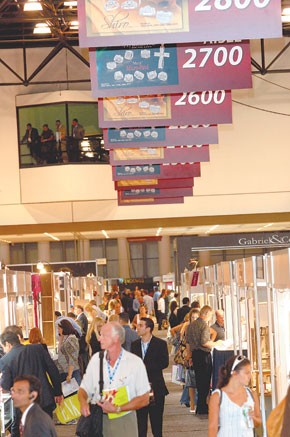 Whether it’s in the frills, like the margarita lounges, or the basics, like having top-notch security on-site, the jewelry and accessories trade show is increasingly becoming a necessity on the trade fair landscape.

Reflecting the opinion that it’s often hard to get a real sense of the details on a leather purse or a diamond brooch from a company’s Web site or its look books, organizers of New York accessories shows say numbers are up for both exhibitors and visitors.

“I’d imagine that it’s the same as in accessories, but with fine jewelry, trade shows are critical,” said Dave Bonaparte, group vice president of JCK Events in Norwalk, Conn., which organizes the JCK Show in Las Vegas and JCK Invitational in New York, which both showcase fine jewelry.

“In fine jewelry, and certainly for one-of a-kind pieces, seeing it on the Web or in magazines doesn’t do it justice. And then there is the security aspect: The traveling salesman is becoming obsolete in jewelry, and the trade show environment is safe and secure. Those two factors alone contribute to the success of a well-run and well-represented jewelry event,” he said.

For 2008, the company is focusing its efforts on JCK Vegas, and has elected not to have the JCK Invitational in New York.

“There are a fair amount of shows serving the marketplace [in New York] so we are looking for other opportunities to take the JCK brand internationally, or to other parts of the country,” said Bonaparte, who added JCK Invitational may return to New York in the future.

The industry appears to be buoyant across all sectors, including general accessories. Britton Jones, president and chief executive officer of Business Journals Inc., the Norwalk-based company that organizes AccessoriesTheShow in New York, said the 2008 event is sold out. The show, which will take place Jan. 6 to 8 at the Jacob K. Javits Convention Center, will boast approximately 1,900 exhibitors — up about 200 from last year — and some 15,000 visitors.

“The waiting list keeps on getting longer and longer,” said Jones. “It’s quite substantial at this point.”

He attributes that partly to what he describes as “the vibrancy of the market that we’ve created at the show. “It’s clearly become the world’s largest and most dynamic marketplace of the accessories industry,” he said. “We’ve had a hard time adding to the overall show floor. We keep trying to find new layouts to improve traffic flow while still allowing more people to participate.”

Brands scheduled to be showcased include Steven by Steve Madden, Jaded, Lacoste, StockinGirl Legwear and Tano.

Jones said a big draw for visitors was the fact that the event offers one of the largest selections in the world of juried and edited accessories.

“It’s a source of newness and the best place to find trends. So people come with a lot of open-to-buy and excitement.”

Increased international participation is being cultivated, with more emphasis on bringing in retailers from Western Europe, Mexico, Japan and Canada.

“Keeping our show fresh is the mantra around here,” he said. “Each season we totally redesign the show from head to toe, from the cafe to the public spaces, reflecting colors and trends.”

Sharon Enright, general manager for the Tradeshow Division of Business Journals Inc., said the venue in 2008 would be revamped to show the influence in accessories of bold colors and prints.

“Accessories are being further embellished again and are more flamboyant in every category. We will take that and present an environment at the show that is very dramatic.”

New sponsors include tequila maker Jose Cuervo, which will host a margarita lounge, as well as Dasani water and Celestial Seasonings teas. Celebrity chef and author Sandra Lee has also signed up to lend her services.

“We always mix it up, and make sure everyone can partake of the special events,” said Enright, adding another highlight of the season would be the seasonal tote bag, in keeping with the major accessory trends of the season, that will be offered to visitors.

While Las Vegas is as important a show venue, Jones said the New York event tends to draw more of a strong international business.

“For us, our shows are larger in New York,” he said. “It’s our original base of business. Sometimes our exhibitors overlap, but there are also a lot of unique exhibitors in each market.”

International participation is also a big factor at the JA New York shows, fairs for fine jewelry vendors that take place three times a year. The next one, JA New York Winter, is slated for March 9 to 11 at the Javits Center.

The winter show is geared toward retailers shopping for spring, and those especially keen to restock after the holidays. Lawsky said the shows remained active, even if the jewelry market has slowed down somewhat.

“The market is somewhat soft, there’s no question about it,” he said. “But we’re being successful because New York is such an important venue. It’s the jewelry capital of the world.”

Security is an important factor, he said.

“What better way to show your wares than in front of a guaranteed audience?” he asked, referring to the more than 8,000 retailers expected to attend. “If somebody can afford to do a trade show, it’s a great vehicle in terms of networking opportunities, new business to be written, old customers to see.”

Highlights of the show include a bridal pavilion, which began at the summer show earlier this year, as well as cutting-edge seminar programs.

“We are continuing to make the experience for buyers as good as it can be,” he said. “There’s a smoother registration process. Trade shows shouldn’t have to be that complicated and the easier you can make it on a retailer to come in and see who they want to see on a well-laid-out floor plan, the happier everyone is. It’s the little things that add up to a great experience.”

Also on the calendar is Accessorie Circuit, which will run from Jan. 7 to 9 at the Show Piers in New York. Trends on view will include brightly colored patent leathers, cuff bracelets, large statement rings, bold necklaces and lots of bright enamels.