The project made its debut in one of the brand’s key stores in Milan.

MILAN — “We wanted to do something that doesn’t exist in the jewelry industry. What you’ll see in the future, it will be just a copy of this,” Swarovski’s omnichannel and commercial operations executive vice president Michele Molon said, introducing the brand’s newest retail concept here on Thursday.

The new look was three years in the making, as the company started some time ago to study consumers’ evolving shopping behavior and preferences to develop an interior design that could match their needs.

“Our goal was to test something out of the box for Swarovski, which is an established company with its established retail [format,] so we wanted to break the rules,” continued Molon.

This resulted in the Crystal Studio retail project, which made its debut in the brand’s store here located in Via Dante, a few steps away from the Duomo cathedral and the Castello Sforzesco castle.

The concept is based on integration between off-line and online, as digital implementations abound in the space. The interactive and socially focused environment intends to offer an immersive shopping experience, encouraging consumers to try on products, customize their purchases and share content on social media, ultimately extending their stay in the shop.

“This is the first of our fourth generation of stores,” said Robert Buchbauer, chairman of Swarovski’s executive board and chief executive officer of the consumer goods business, adding that “to reinvent ourselves is mandatory if we want to stay up-to-date and continue to be successful.”

“Retail has changed a lot in the past five to 10 years. We’ve seen a lot of retailers also having troubles because there are a lot of other formats and ways which you can address clients. And this is what ’omni’ means, so we have to find ways in retail to live up to that omni philosophy,” continued Buchbauer.

Functionality was a key for the executive, who believes that “focusing on changing only the aesthetic is something you did in the past, when you needed a new look and people started working only on colors, furniture […] never thinking about what is actually happening inside the stores, which is very important today because if you want to take [the business] to the next level, functionality has to change and embrace all the technical possibilities we have today in a very dynamic world, which is changing fast.”

Therefore, a systematic change in the approach to customers was ultimately set in motion, through opting for open displays to encourage dialogue between customers and the product. Different ways to display the items were studied and digital touch points and large screens were favored to replace all paper communication as well as offering a fun shopping experience via an interactive selfie wall with filters, among others.

“We had the opportunity to test all these functionalities in our Oxford Street unit [in London], which is still part of our third generation of stores,” said Buchbauer, revealing that even without changing the interior design concept, the shop’s performance after the digital implementations “changed dramatically,” positively impacting sales and customer engagement.

The test-and-learn move in London convinced the management to take the experiment a step further and call archi-star Patricia Urquiola to develop a new aesthetic.

“We knew the new concept had to be feminine, as women represent 90 percent of our final users. And Patricia represents the woman of today, that is a business woman with a creative vision,” explained Molon about the choice of Urquiola.

The architect traded Swarovski’s established off-white retail concept for a warmer, more welcoming environment. Gray porcelain tiled floor and matching suede displays are juxtaposed with nude furniture and metallic mesh elements as well as rose gold details, including the store sign made of faceted rose gold elements alternating with components that can be customized in colors according to seasonal promotions and ad campaigns. 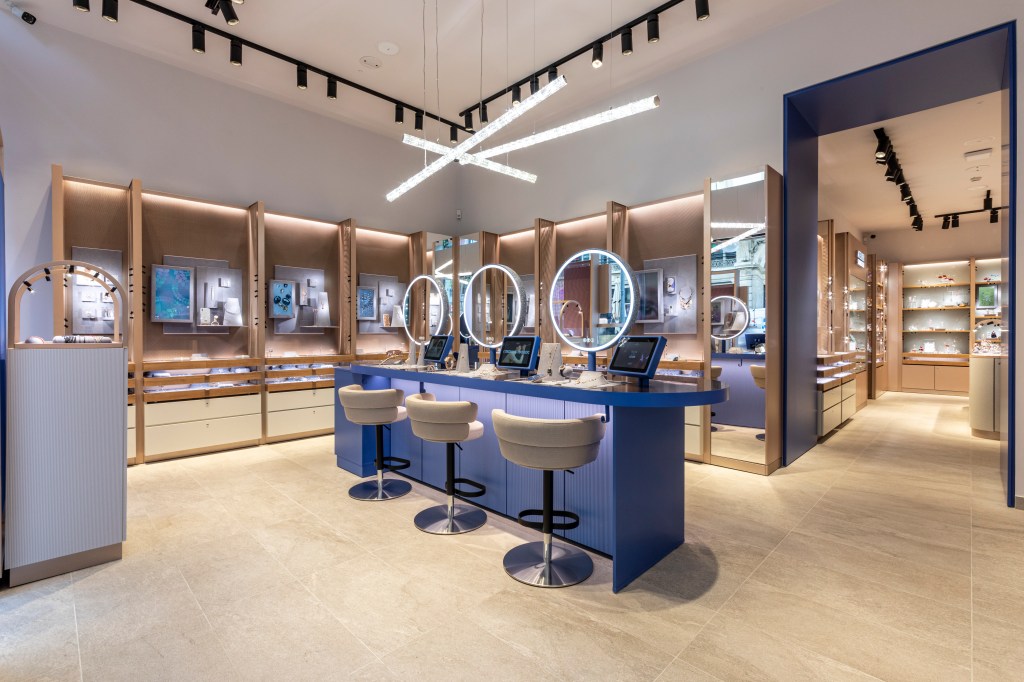 Geometric sparkling chandeliers and a circular mirror echo the codes of the brand, while the label’s signature blue shade defines key elements, including the Sparkle Bar counter. A core area of the store, the jewelry station encourages product discovery and trial both physically and through tablets providing styling tips from Swarovski’s community of influencers. The counter also features mirrors with variable lighting settings to favor sharing of content on social media and offers a wireless phone-charging area to use while shopping.

“The ultimate goal is not necessarily selling products but encourage clients to try them and have fun, as it happens in the beauty industry,” said Molon, adding that some of the sales assistants had also been trained as stylists to further help customers.

Other key corners in the store include The Edit zone, spotlighting a selection of products in focus during a certain period of time, and a gift-wrapping station leveraging the customization trend, a favorite of younger generations.

In sync with the functional mission, Urquiola overall created modular displays “that can be changed even in a day” and “simple formats that can be replicated and adapted in different parts of the world, even in the smallest shops, adjusting to local consumers’ taste and needs.”

“There are 5,000 items showcased. My goal was to treat this complexity with simple concepts, to treat such a number of products with delicacy,” said the architect.

The modular design also impacted the merchandising approach, as products are displayed re-creating mood boards, suggesting combinations, or showcased according to product categories and specific themes, such as zodiac signs or Looney Tunes characters. For the first time, all items are not shown under glass cases but can be tried on directly by consumers, telegraphing a “relationship of trust” the brand wants to build with its customers.

“We will implement some of these modular elements in our former retail concepts, too, while this new format will continue to evolve and will change in the upcoming year-and-a-half,” said Molon. 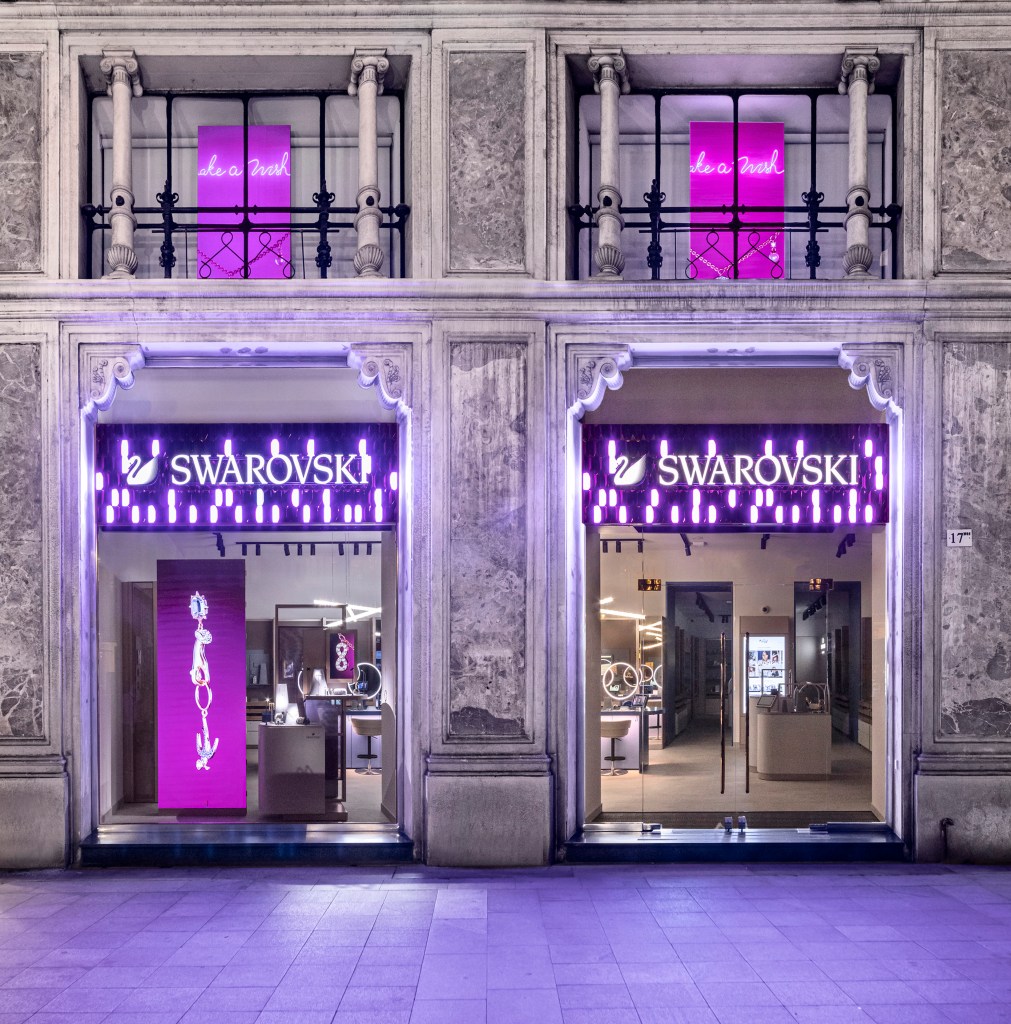 After hitting the Via Dante store, which was selected for its traffic mixing local customers to international ones, the Crystal Studio concept will be adapted to the Swarovski unit inside the Carré Sénart shopping mall in Paris beginning Oct. 31 and will debut in the company’s Beijing, Shanghai and Los Angeles units.

By the end of the year, eight to 10 locations will sport the format, with the count rising to 100 doors globally by the end of 2020, including the revamp of the Swarovski flagship in Ginza, Tokyo, which “will represent a higher evolution of the concept, just in time for the Olympic Games there. If here we had fun, there we will have super fun,” concluded Molon.