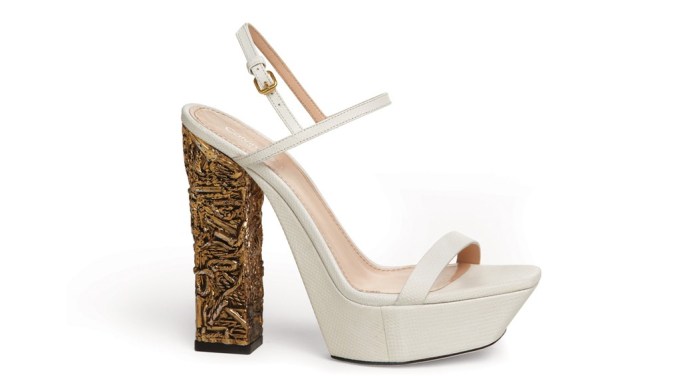 Calvin Klein Collection’s range of men’s and women’s accessories is lauded for its minimalist aesthetic and the upcoming spring season will be no exception. The women’s accessories that paraded down the runway during New York Fashion Week in September were heavy on embellished gold motifs, from chunky high heels on platform sandals and ankle-strap pumps to a black leather handbag affixed with gilded sequins and metal adornments. A selection of simple square shoulder bags also accompanied the collection, with hardly any hardware in site.

For men, spring will bring unexpected details like handmade and hand-stitched footwear constructions that include a dress shoe with sport shoe elements, laces placed beneath leather tabs and laser-cut logos placed on soles.

Signature sunglasses were rectangular in shape, modern in feel, and come in nude, tortoise and black.

American Express made it a point to bolster its fashion and digital presence this year, most recently through partnerships with Mercedes-Benz Fashion Week at Lincoln Center and Made at Milk Studios.

A series of e-commerce platforms that Amex launched in September during Mercedes-Benz Fashion Week (its 11th consecutive season partnering with the fashion week sponsor) in partnership with Lucky Magazine, Harper’s Bazaar and The Fancy gave card members exclusive deals on products chosen by editors and influencers from the above titles.

“What you saw in September was a real concerted effort to bring to life a connection between content and commerce, specifically image-driven content. Between Instagram and The Fancy, we’re seeing this incredible movement toward this ability to shop imagery,” said Deborah Curtis, American Express vice president of entertainment, marketing and sponsorship.

For The Fancy, already an e-commerce destination, Amex selected industry influencers like Prabal Gurung, Garance Doré and Susie Lau of Style Bubble to select their must-haves for consumers. While the general public had access to the selection, Amex cardholders were able to get $20 off items of more than $100. The company also sponsored an American Express Cardmember Only Show for Rachel Zoe’s spring collection.

“We know that from working from The Fancy that accessories are some of the most sought-after items on the digital commerce site. It’s a key part of fashion and we absolutely recognize that in what we do around fashion and will continue to,” Curtis said. She added that the Amex Skybox — perched above both runways at Lincoln Center so card members are able to experience runway shows — remains one of the company’s largest fashion initiatives.

BRAND OF THE YEAR: FOSSIL

WWD: Fossil is best known for watches. Is this something you’re trying to maintain or change with the expansion of additional categories?
Tom Kennedy: Watches continue to be our largest category [71.8 percent of Fossil’s business].It’s our legacy category. We continue to have an enormous opportunity to grow our watch business. We have a significant leather business and a growing jewelry business that started out of our European distribution base. It’s more balanced than people would think.

WWD: What about this jewelry-timepiece hybrid?
T.K.: We see an emphasis around jewelry, bangles and charms. It’s all about the wrists and how our watches work well with our jewelry collection. The core style [the Georgia] came out [in February] with a metal and leather strap, and we’ve done it with bangle bracelets and metal with leather inserts [too]. It’s the watch that epitomizes the fusion between timepieces and jewelry. It looks great on a metal bracelet, on a leather strap or in gold, silver or rose gold.

WWD: Men’s accessories are a growing market. Can you speak to this and how it relates to Fossil specifically?
T.K.: We’ve always had a strong business for watches and men’s leathers. [But now] men’s leathers has become more dimensionalized — [meaning] men buy more than one type of bag now, when historically they may have bought a briefcase or backpack. What we believe now is much the same way how people buy watches or jewelry to compliment an outfit, people buy bags in multiple, no matter what their gender is.

NEXT: Trendsetter of the Year >>

TRENDSETTER OF THE YEAR: CAMILA ALVES

The founder of handbag line Muxo and Muxo for QVC migrated to the U.S. from Brazil at age 16 — and the two countries have served as the inspiration for bags, which range from more than $200 for a small, multicolored leather fringe style with a gold-plated wire handle to $1,585 for a woven leather shoulder bag. “All products are designed to be fashion-forward and meet the needs of the modern woman’s lifestyle,” Camila Alves, also ambassador for Macy’s INC International Concepts, said.

Theodora & Callum launched for spring 2011 as a passion project for cofounder Stefani Greenfield — and the accessory line of scarves, jewelry, caftans, scarf tops and dresses (shoes and bags were part of the initial collection but will not be part of spring’s offering) was born from her love of collecting beautiful things from around the world. Carried at retailers such as Neiman Marcus, Shopbop and Henri Bendel, the collection is a nod to the European jet-set of the Sixties and Seventies, and always rife with vibrantly colored prints.

Eleven-year-old company Vince Camuto — now spanning more than 30 categories across men’s and women’s lifestyle offerings — has had a banner year. In addition to expanding the women’s collection of apparel and accessories, handbags, small leather goods, jewelry and watches have all grown in a “big way,” according to chief executive officer Vince Camuto. This year saw the launch of VC Signature, a premium line of shoes and handbags, as well as the introduction of men’s accessories and fragrances. Camuto said the retail business has increased domestically and globally as well, and there are plans in the works to roll out freestanding doors in key markets around the world.

C. Wonder’s first flagship bowed in SoHo in New York last October — and in the year since, it’s opened nine stores (its latest on Nov. 2 in Washington, D.C.) with two more openings planned by the end of the month in Fashion Valley in San Diego and King of Prussia Mall in King of Prussia, Pa. Accessories have played an instrumental role in the retailer’s sales assortment since launching with accessible retail prices that range from $18 to $250, but the nylon program and corresponding The Monogram Shop are the core of C. Wonder’s accessories business. Consumers can monogram bags — including the $58 Nylon Easy Tote bag — at any of the retailer’s locations, but belt buckles, enamel cuffs and initial pendants are also bestsellers.

Essence editor in chief Constance C.R. White’s career in journalism began as assistant to Gloria Steinem at Ms magazine, and in the more than two decades since, she’s held posts at WWD, as executive fashion editor at Elle, style reporter at The New York Times and as style director and brand consultant at eBay. White believes now is the “most exciting time in publishing” — citing a multitude of ways to successfully reach and share information with readers, ranging from the print publication, essence.com, videos, social media platforms and smartphones and tablets.

Stella & Dot has redefined the notion of “social selling” with its model of direct sales that uses various digital platforms to drive traffic to physical trunk shows selling jewelry and handbags. Ceo and founder Jessica Herrin calls the company a “flexible and stylish business designed for the modern woman,” and cites the ease with which women can launch their own businesses. “We call this innovative model social commerce. It’s a fabulous combination of high style, high touch and high tech,” Herrin said.

NEXT: Influencer of the Year >>

INFLUENCER OF THE YEAR: ASSOULINE

The New York City-based luxury book publisher is owned by husband and wife Prosper and Martine Assouline, and has been since it was founded in France in 1994. A favorite of fashion folk, the firm is renowned for image-laden books about subjects like design, fashion, art, architecture, photography and lifestyle. Assouline has published 1,200 books — including new titles such as “Akris,” Donna Karan’s tribute to her late husband in “Stephan Weiss: Connecting the Dots,” Venetian jeweler “Nardi” and a special-edition series, “Windows at Bergdorf Goodman.”