The Couture Show: Ones to Watch

New vendors are ready to shine in Las Vegas. 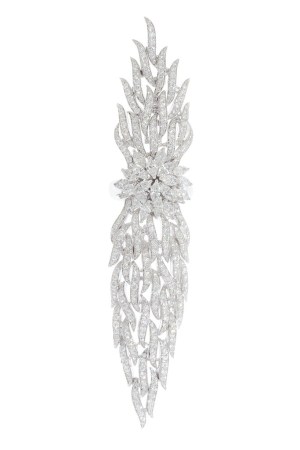 New vendors are ready to shine at their first The Couture Show.

It took half a century, but this year Lebanon-based jeweler Yeprem Chakardemian, who launched his brand in 1964, will finally make his Couture debut.

Chakardemian’s unique designs, done mostly in white diamonds and 18-karat gold, heavily focus on the idea of adornment — whether on the hands, ears or wrists.

At the show, Chakardemian will present his intricate pieces, which incorporate diamond designs that replicate flowers, leaves, snakes and other fantastical, talismanlike designs. The avant-garde pieces, which range from $2,800 to $160,000 retail, are not for the fashion faint of heart. Case in point: Rihanna recently wore Yeprem’s finger-encasing rings to the 2014 Met ball.

In the midst of its U.S. launch, Astley Clarke is making a pit stop in Las Vegas.

Founded in 2006 by Bec Astley Clarke, the fine jewelry line began online and has since landed in some of London’s top department stores, including Liberty and Harrods.

For fall, the brand will make its American retail debut in Saks Fifth Avenue and Neiman Marcus.

Clarke, who was awarded an MBE for “Services to Jewellery” by Queen Elizabeth II in 2013, will launch three collections for the U.S.: Biography, Fao and Muse.

Biography, priced between $95 and $745, is a collection of woven bracelets inspired by the Indian festival of Rakhi.

Standout designs include her modern take on the Cameo, featuring customizable portraiture in gemstones, diamonds and enamel, as well as her signature skull portraits.

“My customer is not timid,” said Dyment. “She likes to wear something no one else wears.”

The creations, produced in Italy, retail from $2,390 to $14,170 and are sold at Bergdorf Goodman, Net-a-porter and several independent boutiques.

Michelle Fantaci will make her Couture debut with her Chess Queen collection, a series of rings, pendants and earrings inspired by “the mythos around chess and the queen herself.”

The offering features 14-karat gold with diamonds, as well as precious and semiprecious gemstones. Geometric rings, which can be worn alone or stacked, are a highlight of the expansive collection.

“There is a nesting aspect,” said Fantaci of the design. “I haven’t even counted how many combinations you can do with it. It gives the wearer a lot of freedom to play.”

Prices start at $435 and rise to $5,070 at retail. Fantaci, who launched her label in 2007, is currently carried at New York boutiques Blue Tree and Love Adorned, as well as California’s Erica Tanov and Broken English, and Kansas City’s George Lifestyle. They are also available online at Stone & Strand.

Savannah Stranger has someone special to thank for her career in jewelry: her high-school boyfriend.

“When I was 17, I started working on a pearl farm in Tahiti owned by my boyfriend’s mother,” she explained. “I worked for them during the summers in college [and after] — I was there for eight years.”

Through her designs Stranger aims to elevate and transform the consumer’s traditional view of pearls.

“I don’t want them to be age-specific,” she said.

To accomplish this, Stranger uses Keshi pearls, which display imperfections and natural grooves of the pearl. She then casts each pearl in black rhodium, white gold, yellow and rose gold, with diamond accents.

“It was an instant attraction,” Cullen said of the unique material. “I’m not sure how I can intuitively explain it. I was drawn to the material and knew that I needed to work with it.”

Cullen’s designs take the prehistoric black fossil and marry its stark look with more modern materials, such as 18-karat gold matte overlay and black diamonds. They retail from $800 to $11,230.

Each piece is ground and pieced by hand. The jet itself is sourced from Victorian mines off the coast of Whitby, England — though you won’t find Cullen herself in the trenches.

“I don’t like heights, so the idea of dangling off a cliff…” she said. “No, I don’t want to dangle off a rope.”