The Couture Show: Taking a Step Into Color

Bold hues and intricate craftsmanship are set to rule in Las Vegas. 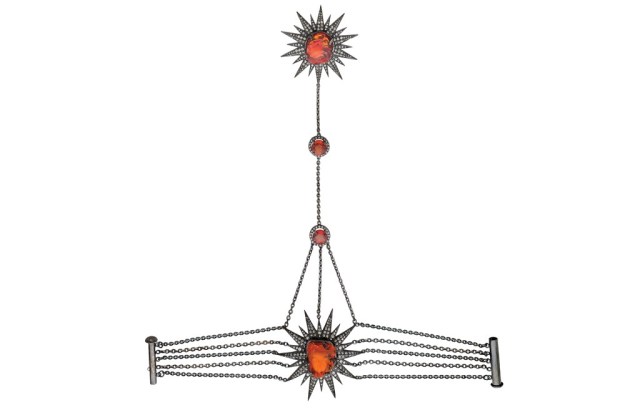 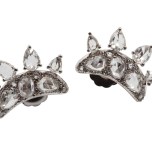 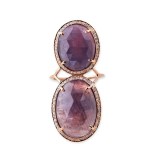 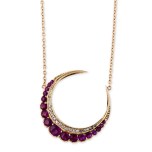 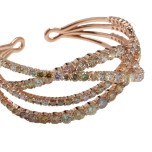 Color is making a comeback.

At The Couture Show, which begins today and runs through Monday at the Wynn Las Vegas, jewelry’s top designers and retailers are showing off their most vibrant, notice-me creations. According to the U.S. Department of the Interior’s annual geological survey, issued in February, the domestic market for natural, non-diamond gemstones was estimated to be about $1.5 billion in 2013. The same study stated that U.S. produced 11 percent of the world’s natural gemstones in 2013, up from 9.3 percent in 2009.

“Color stones were forgotten for a while,” said Ian Harebottle, chief executive officer of Gemfields, the world’s leading producer of ethically sourced, rare-colored gemstones. “The supply was so erratic for such a long time and mined in a very small way with people who weren’t investing in proper infrastructure or supply channels.”

Gemfields produces roughly 20 percent of the world’s emeralds. The company is hoping to capitalize on the industry’s renewed infatuation with color with its first ruby auction, to be held this June. “Jewelry became quite bland, and every piece looked like any other for a while,” said Harebottle. “Now, what artists do with paint, jewelers want to do with gems. And if you want to do a great painting with gems, you need all the colors of the palette.”

Designers have embraced the trend fully, taking the opportunity to showcase artistry in their craftsmanship.

“Jewelry is not what it used to be, with just a diamond necklace and matching earrings,” said designer Colette Steckel. “This industry has taken a step into fashion. It’s not only about the dress anymore. Jewelry is now very important in the design industry.”

Click Here for Additional Designs from The Couture Show >>

Steckel has begun infusing more black and white diamonds, as well as rose and white gold, now that color has migrated to the mainstream. She hasn’t turned away from her colorful roots, however, incorporating new pops of color into the existing Eden collection.

“I’ve been designing for 20 years, and my ideas have always been kind of ‘out there,’” she said. “Before, people said, ‘If we’re going to spend that money, we might as well go to other brands and get something conservative.’ From 2007 until about 2010, color wasn’t something that retailers were looking for, because the customers weren’t willing to spend a penny on something that didn’t look like it was going to keep value over time. They only wanted diamonds.”

According to Steckel, the industry has warmed up to more colorful designs in the past year, particularly among U.S. consumers. Steckel’s American sales have grown approximately 60 percent over the past 12 months.

“It was a big jump,” she said. “People are finally thinking that we smaller designers are legit.”

RELATED STORY: The Couture Show — Ones to Watch >>

A bevy of young designers will be included in this year’s showcase, including Sorellina, a New York-based line founded by sisters Nicole and Kim Carosella in 2011. The duo had capitalized on the fantastical element of color in their Victoria and Puccini collections, which are based around the shapes of snakes and butterflies, respectively.

“We were both surprised at how well our snake and butterfly earrings do,” said Nicole Carosella. “We were afraid it was a bit of a niche market, but they are really popular.”

Colorful accents in the collections include pink and green tourmaline as snake eyes and butterfly wings done in emeralds and rubies. For couture, Sorellina is showing variations on its vintage-inspired designs, using raw sapphires and vintage diamonds, among other precious gemstones. Prices run from $3,500 to $30,500.

“Mixing semiprecious with tourmaline is the secret,” Bicego said of the collection, priced between $1,000 and $60,000. “Every piece looks special and like it’s one of a kind.”

“One of a kind” seems to be the buzz phrase among fine jewelers, as consumers are more willing to open their wallets for pieces no one else will have. To keep up with the demand, Istanbul-based designer Yossi Harari invested in computer-aided design software. Harari used the technology to transform his own random sketches into lacelike patterns of gold. The 18-karat gold collection, which ranges from $1,900 to $2,200, will premiere at the show. “The design itself is so intricate that it’s cast one time, and after the cast is done, I delete the scan,” said Harari. “It’s a one-of-a-kind, handmade piece because the cast itself cannot be reproduced. You won’t see it on anybody else’s ears, necks or wrist.”

Fred Leighton’s latest collection, Crescent, is inspired by a one-of-a-kind piece seen on a very famous somebody else: Lupita Nyong’o.

“The whole collection is based on an earring designed for Lupita for the Oscars,” said Greg Kwiat, ceo of Fred Leighton. “It was designed just for her, but people started calling and asking for it. They were really enthusiastic.”

The Crescent collection consists of a series of five earrings, crafted in 18-karat white gold with rose-cut diamonds, all based on Nyong’o’s earring. Prices start at $9,300. “It’s playful, but still special,” said Kwiat. “We are seeing people want fine jewelry that reflects their sense of style.”

Kwiat noted that the parent company, also named Kwiat, had shown growth of 25 percent year-over-year, with the diamond company making a push in colored variations. At Couture, the brand will show its new Entwine collection, which features various colored diamonds in shades of yellow, green, pink, blue, gray, violet, Champagne and cognac. The pieces consist of cuffs and rings, and range from $28,900 to $132,500.

As evidenced by Fred Leighton’s Oscar inspiration, celebrity culture continues to influence design, as well as recognition of the designers themselves. Los Angeles-based Jacquie Aiche may expect an increased turnout at the show, thanks to a loyal supporter: Rihanna. The fashionable pop star, who has been a fan of the brand since 2010, frequently posts images of herself in Aiche’s body chains and stud earrings on her (since-deleted) Instagram account.

“In five years, the company has grown tenfold,” said Aiche, citing a 30 to 40 percent jump in sales in the past year alone.

“Most of our sales are coming from social media, where our followers see a post and then go on the site.”

According to Aiche, the brand’s Instagram account sees a 20 to 30 percent increase in followers with each mention from Rihanna. Currently, Aiche’s account boasts just under 100,000 followers. Aiche will show a new range of styles featuring stones including emerald, malachite and lapis, with the bar for success set high: Last year at Couture, Saks Fifth Avenue picked up the line.

David Yurman has also jumped on the social media hype, unrolling several social media campaigns over the past few months — most notably with the 30th anniversary of its famous cable pattern.

“Social media helped the brand to fully realize that experience,” said Carol Pennelli, president and chief commercial officer at Yurman. “We launched our first DIY Instagram video, unveiled a series of color story albums on Facebook, and launched a dedicated Pinterest board to generate excitement about our limited-edition collections.”

The combined efforts resulted in a 169 percent year-over-year increase in social media visits.

For Couture, the brand will continue the cable theme with two new collections: Cable Buckle and Hampton Cable. The Buckle line takes inspiration from equestrian gear, such as halters, stirrups and bits. New pieces feature a buckle on the curb-link chain, a nod to the buckle similarly found on a horse’s bit. The Hampton group looks to the beaches of Long Island, featuring a pattern of links meant to emulate ocean waves, as well as new additions of 18-karat yellow and rose gold.

Both collections will focus heavily on bracelets and rings, which, according to Pennelli, make up 65 to 70 percent of the business. The company, known for its metalwork, will also introduce a splash of color with its Petite Pavé collection, which incorporates pavé gemstones, like bright pink sapphires. Prices for the collection range from $695 to $15,000.