The Craft Behind Cartier’s Creations

The creation of high jewelry has a deep legacy. 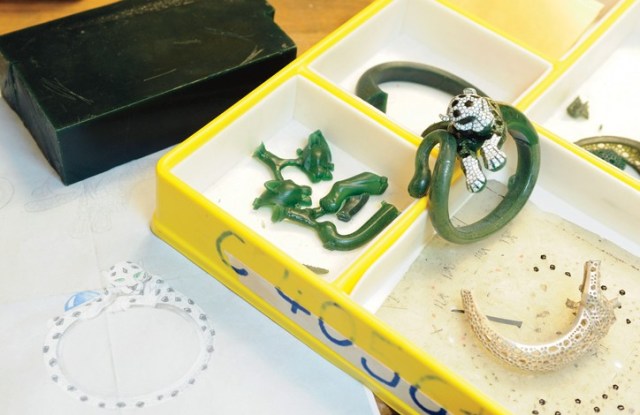 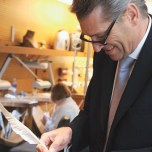 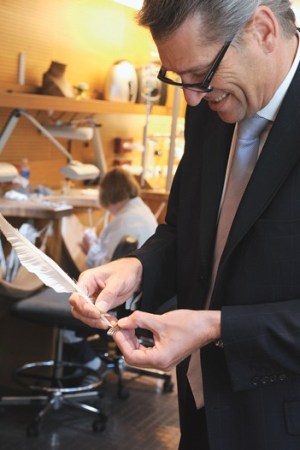 Xavier Gargat with a feather used for polishing.

Many wonders have been conceived in the jewelry workshops above Cartier’s grand Paris flagship, opened by Alfred Cartier in 1899, from the legendary ceremonial Patiala necklace, sold to Maharaja Sir Bhupindar Singh of Patiala in 1928, to the remarkable gold “Crocodiles” necklace boasting daffodil-hued diamonds and emeralds for scales, commissioned by the late Mexican actress María Félix’ in 1975.

In December 2005, the site’s ateliers, which cover three floors above the store, underwent a modern facelift, while retaining certain traditional jewelry making features. Wooden desks, for example, feature scooped out lids lined with lambskin pouches, to provide a soft landing for errant gems.

“Jewelers have used those for centuries,” says Xavier Gargat, director of Cartier’s high jewelry workshops, who, following in his father’s footsteps, has been in the jewelry trade for 37 years, with more than a decade at Cartier. Having held positions at other Place Vendôme jewelers, Gargat describes Cartier as a massive operation. His on-site team comprises 36 in-house jewelers, of which six are dedicated to high jewelry.

As the coordinator of a perpetual flow of creations, spanning the house’s annual high jewelry collections, special orders and classic lines for the Cartier stores, Gargat, tall with twinkling blue eyes, moves studiously from worker to worker to assess each precious element of their work. A symphony of drills and metal files fills the air, accompanied by a faint odor of burnt metal.

“A jeweler needs to be patient, but actively patient,” says Gargat, who gets his thrills from optimizing the technical wizardry behind each piece.

Down the hall, a quartet of stone setters calmly maneuver gems into rings held in clamps. Working under a softened light in order to read the natural sparkle of the stones at hand, the job also involves working with the natural structure of the gems, according to Gargat. A gem can crack if struck the wrong way with a stone setter’s hammer, he points out.

Along the way, versions of the house’s iconic three-dimensional panther surface regularly in various stages of conception — such as a green wax sculpture pierced with holes indicating where stones are to be set, or as a modeling – clay sculpture, both painstaking exercises in volume and proportion.

For high jewelry pieces, the journey from idea to finished product can take longer than two years, with certain designs requiring thousands of hours in manual labor. The process always begins with the purchasing of a piece’s main stones, sourced from a network of dealers and mines around the world.

“Whether she’s hunting for gems or I’m drawing, we work in fusion,” says Karachi. “We have the same sensibility and have the Cartier ‘grain’ in us—often we don’t even need to speak.”

It’s not always such a smooth ride, however. Recently, Karachi took a lot of convincing from Chabbert to work with opals, for example. “To begin with, I couldn’t connect with them, I found them kind of disturbing,” recalls Karachi, who, after several trips with Chabbert to suppliers, was eventually seduced. “I started to see a lake and then mixed in some emeralds, then came the dragon curling around the edge.” Karachi gestures to a sketch of a bracelet that ended up carrying the dramatic composition. She considers the stones to be living things, and likens the design process to taming an animal.

A fine artist by training, Karachi manages six designers who sketch with brushes and watercolor paints. Cartier president Bernard Fornas approves each design. Chabbert’s job, meanwhile, involves managing budgets that can run into the millions, and occasionally involves acquiring six-figure rocks over the phone. Trust in one’s dealers is paramount, as the purchasing of such big stones doesn’t even involve a signature. “It’s a métier based on spoken agreements,” says Chabbert, who was the first female gemstone buyer in the company’s history.

Once Cartier’s marketing teams have established a collection’s themes, the design process kicks off with a series of brainstorming sessions between the gem buyers and the designers. In the early stages, Chabbert will sometimes scatter gems across her beige, suede-lined desk in order to play with unusual color combinations or tease out a stone’s nuances. Channeling the emotion and personality of the stone comes first, she says. The drawing comes after.

“When we see the stone, we imagine the object already,” Chabbert says, unfolding a clear blue 100-carat sapphire from a paper pouch on her desk and cradling it in her palm. “It’s about the touch. Stones are cold and then warm up, sometimes they’re soft, lovely round cabochons and sometimes they have facets that play on the fingers and each stone has a particular density.”

For the team, the design process is about pushing the bar higher with an innovative mix of gems, a Cartier trademark. Chabbert cites as an example a necklace designed in 2006, made from diamonds, pearls and spinels in a spectrum of pinks. “Nobody had done that before,” she says of the combination.

If Chabbert has one regret, it’s that today’s collectors are much more private than those of, say, the Forties and Fifties, a period when many actresses would parade their own jewelry in their films. “It’s a shame as jewelry is meant to be worn…[then] ladies were covered in jewelry at dinners and balls,” she says.

Cartier only began seriously documenting its high jewelry designs around five years ago. Prior to that, the best opportunity to see a sold piece again was when — and if — it came up for auction.

Chabbert lists the house’s elaborate tiaras among some of the most thrilling pieces she’s worked on, yet hesitates when pushed to name the most extraordinary Cartier gem to have passed through her hands. “It’s always emotional to come face-to-face with a beautiful old stone, to know its story is very mysterious,” she says. “A lot of old diamonds and rubies have had fabulous lives and all is hidden on the inside…[but] it’s [also] always about tomorrow’s stone.”