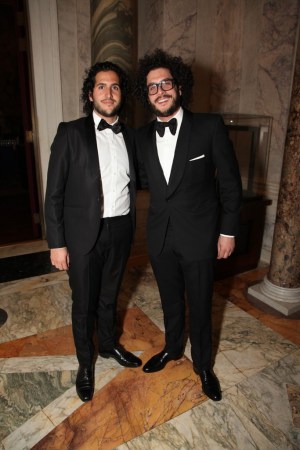 NEW YORK — “So, how do you know Judy?” That was the phrase heard throughout The Morgan Library & Museum on Wednesday evening, where the National Jewelry Institute held its 10th anniversary gala.

Over cocktails, revelers discussed their connection to the NJI, as well as their own jewelry collections. “I shop a lot,” said Vivian Strauchen with a smile. Dressed in a heavily embellished Tom Ford gown, Strauchen had gone simple on the jewelry for the evening. Her favorite piece, a Tiffany cuff, had been left home. “My husband got it for me for Christmas last year,” she said.

Jean Shafiroff, dripping in Van Cleef & Arpels pearls, had difficulty showing favoritism. “Everyone loves jewelry…it’s hard to pick one piece,” she said, choosing to describe the most recent addition to her jewelry box instead. “My husband recently purchased a vintage David Webb bracelet for me. It’s a gold bracelet with crystal pieces. I went to the case, and thought, ‘This is lovely.’ And that was it.”

A quick glance throughout the crowded cocktail scene revealed a definitive favorite when it came to gown color, at least — a bright green, or more appropriately, emerald. Shafiroff, in voluminous Oscar de la Renta, Anastassia Khozissova, Annabel Vartanian Jeffries and Alexandra Leighton had all selected some variation of the hue. “I think I missed the memo,” noted one attendee, clad in a traditional black frock.

Guests eventually made their way to the grand ballroom for dinner, which was kicked off by an introduction from Princess Marie-Chantal. “The Institute has worked tirelessly since its inception to bridge perceptions of jewelry, bringing its wonder and art to a much wider audience,” she said, before welcoming Price to stage, naming her “my good friend and the force behind this institution.”

Price’s remarks noted the institute’s history, while looking to its future; namely, the upcoming partnership with Parsons The New School for Design. The program, titled “The Fine Art of High Jewelry,” will launch in fall 2015 with a weeklong intensive course at Parsons in New York and Paris. “Jewelry is more than a luxury; it’s a work of art,” said Price, citing the importance of expanding opportunities of learning. “Our partnership with Parsons is not just making me feel great — it’s making me feel extremely proud.”

Joel Towers, executive dean of Parsons, echoed Price’s sentiments. “It really is a pleasure and a honor to work with Judy,” he said. “I’m very excited about the possibilities that this program provides.”

The evening was capped off with dessert — a cake in the form of the late financier J.P. Morgan’s jewelry catalogue. “I was very adamant about that cake,” said Price. A guest stopped by to thank her for a lovely evening. “It was,” agreed the satisfied hostess.