The Network of Cartier’s Boutiques 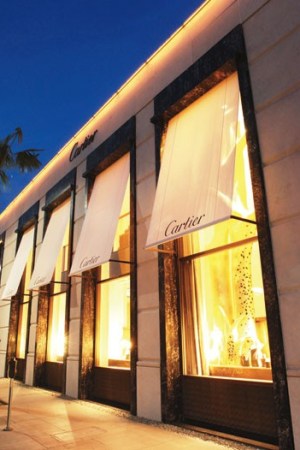 Cartier boutiques are steeped in old-world elegance. Stately buildings on important shopping streets, they are decorated with opulent chandeliers, wood paneling and substantial furniture. But while the stores are designed to impress, they are never so ornamented that they distract from the main event, which is the product.

Not many cities in the world are sufficiently cosmopolitan and refined to qualify as flagships. In fact, only three make the cut: Paris, London and New York.

Cartier doesn’t plan to lower its standards, even by a notch, when considering new locations. “We’ve been always very careful in opening new boutiques,” says Anthony Ladrue, vice president of retail for North America. “There are only 36 boutiques in North America. It’s a pretty exclusive network for such a large market.”

The New York operation — where one of the three “temples of the brand,” as they are known in company parlance, is located—was established in 1909 by Pierre Cartier, a grandson of the founder. The flagship store on Fifth Avenue was acquired in 1917. Today, Cartier is moving cautiously on the expansion front. The company plans to open only one store this year, a 5,000-square-foot unit at CityCenter in Las Vegas in early December. It will be one of the largest Cartier boutiques outside Fifth Avenue and the Paris maison.

Designed by Paris-based Bruno Moinard, the facade has Art Deco influences with pieces of opaque and champagne-colored glass framed by thin pieces of brass radiating from the floor. It was inspired by fan motifs, which can be found in Cartier jewelry throughout the years. Inside, there will be oak paneling and floors, and glass display fixtures trimmed with statutory bronze.

“CityCenter is going to be a unique design,” Ladrue explains. “It will be the fi rst facade in North America using that look. We wanted something very cool and different. It will be crazy and quite audacious.”

Like other large projects, CityCenter was in danger of being sidetracked by the economy. In March, the $8.6 billion resort, casino and retail development was in danger of missing a loan payment, and bankruptcy rumors began swirling. However, a statement issued on April 29 by joint venture partners MGM Mirage and Infinity World, a subsidiary of Dubai World, said the companies had reached an agreement on a revised joint venture and had also reached an agreement with CityCenter’s lenders on a plan to fully fund the completion of the center.

“It’s one of the most exciting projects,” notes Ladrue. “The quality of the casino and hotels [is amazing]. It’s very rare an opportunity of that magnitude happens.”

Ladrue admits the company’s exacting standards preclude it from entering many centers. “It takes a long time” to fi nd a site, he says. “We go to see the market. We only want the very best, premium location and premium space. I don’t think we will jump on any opportunity.”

Rather than opening new boutiques, Cartier has been focused on renovating or relocating existing ones. “We renovated most of our boutiques in the past three or four years,” he recounts, noting the most recent renovation was the St. Thomas Street boutique in Toronto. “Today we’re happy where we are. We’re probably in the most important markets for the brands. I don’t think Cartier is missing from any markets.”

The centennial of Cartier in America will be a major celebration for the North American boutiques, Ladrue explains. Besides limited edition products, there will be events at each store. The Fifth Avenue flagship will show 100 Cartier pieces culled from the company’s museum in Geneva and from private collections.

As a brand that values its history, there are some things that Cartier is  loathe to change. “Our retail strategy is service,” Ladrue says. “Cartier has been focusing on service for the last 100 years. From the time a customer enters the boutique, we want to create a memorable experience.”