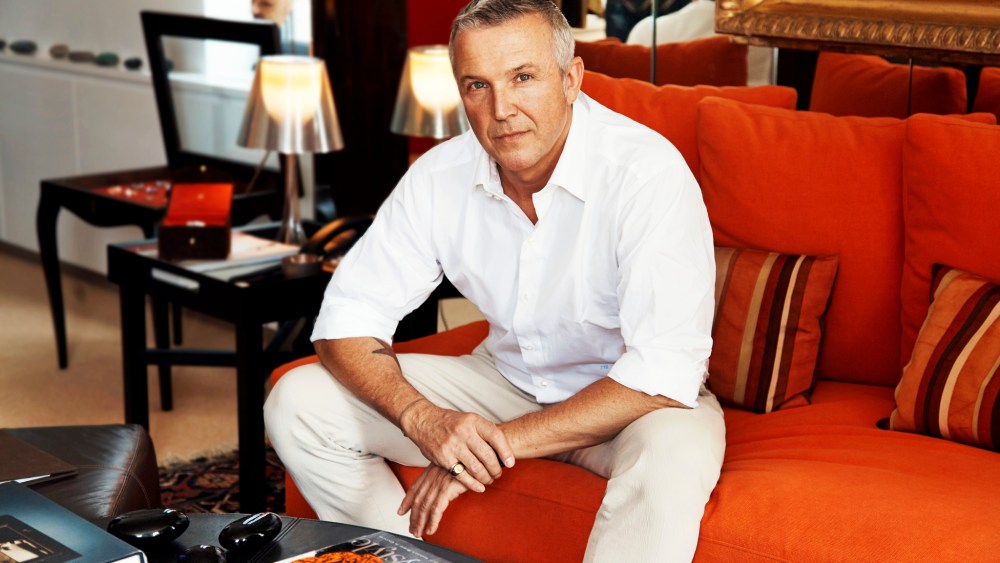 Perched on the 25th floor of a Madison Avenue Midtown high-rise is a jewelry salon that has gained widespread repute and influence via whispers, not shouts.

Taffin, the jewelry label and atelier founded 26 years ago by James Taffin de Givenchy, is an anomaly in a jewelry industry that is increasingly becoming dominated by global megabrands. For de Givenchy, however, it remains a thoughtful and inspiring pursuit toward innovation and creating custom “tiny little sculptures” to adorn the fingers, wrists and necks of consumers with a taste for high jewelry that defies categorization.

He presides over his salon — with its sepia tone walls, curios sourced from around the world and an unexpected soundtrack of classic American rock — with a certain ease and nonchalance. De Givenchy remains in a world of his own — floating above Madison Avenue in a monastic setting that allows him to focus on his craft.

This level of discretion has brought his made-to-order designs into the jewelry drawers of some of New York’s most discerning clientele. De Givenchy’s identifiable, yet hard-to-pin-down signatures, coupled with his couture approach, stand to make him one of jewelry’s most storied figures of his time.

“What you find in a small house like me is a singular vision. It’s my product, I follow it from concept to the finished piece. Personally I feel like I have a duty to continue doing what I like, with a great hope that I can change the world. I like to make pretty things, I like to experiment with things and get a thrill out of creating things I haven’t made before,” he said in his studio, clutching a needlepoint pillow embellished with a skull motif.

That kind of paradox is what seems to get de Givenchy going. His jewelry splices through negative space, using unique stone cuts as vehicles to experiment in realms of color, material and form. His jewelry meditates on uncommon fabrications — weaving in rubber, ceramic, leather cording and glass as a means to casually incorporate extraordinary gems into collectors’ daily lives.

“I’m more practical when it comes to jewelry, if there is such a thing as practicality. I want it to be something they live with, to put a ring on everyday or a pair of earrings, not just for an event. I do have clients that have so much jewelry but I want my jewelry to be cherished in that sense,” de Givenchy said of how his design ethos is connected toward a larger goal of sustained wearability.

Times have changed in the daily cadence of collectors’ lives — forcing high jewelers to adapt to new, busier lifestyles. For de Givenchy, this shift has been beneficial — leading more women toward his vision of tactile high jewelry. “A lot of the jewelry made was to be worn at dinners and events. I think what I find exciting about the democratization of fine jewelry is that we want it to go from day to night. You find it in fashion as well, there is this casual mix and that’s what I’ve always wanted to do with jewelry — make things that are with you all of the time,” he said.

The nephew of legendary couturier Hubert Taffin de Givenchy and the son of Givenchy Parfums’ founding head Jean-Claude Taffin de Givenchy, this relaxed approach is also reflected in his general personality. Generous in spirit like his jewelry, de Givenchy appears to appreciate a certain high-low mash-up in life and is eager to engage on almost any topic.

The jeweler is decisive in his methodology and has long been adamant that his designs should not be readily available for purchase in a store. “I don’t know how you can do a ready-to-wear line for jewelry, it’s never been my thing. I’ve always worked as a small workshop doing couture,” he said.

De Givenchy appears in total control of his product, seemingly obsessive and unable to operate in any other way. When appointed as the creative director of Baccarrat in 2012, de Givenchy departed a mere six months later — exhausted by the politics of a large corporate company and how they detracted from his clarity of vision.

Similarly, he finds the prospect of some earlier works hitting the resale market as “terrifying,” seeing they were produced before he had set up an in-house atelier of artisans and setters — leaving certain variables out of his control.

Taffin now operates a factory of about six craftspeople in the same building as its studio, with de Givenchy careening between the two spaces multiple times a day to check the quality and manipulations of his designs. He compared his workroom staff to the “petit mains” in his uncle’s couture house in the midcentury — both bygone art forms that face a greater prospect of extinction each day. “The day they find a way to set stones mechanically, this will all be done,” he said of jewelry’s last reliance on handmade production.

The latest chronicle of de Givenchy’s obsession is fragrance — playing back to his roots and his father’s greatest professional achievements. Taffin will launch a company devoted to perfume this holiday season with an initial seven scents sold directly through a Taffin Fragrance website, each priced north of $400.

Unlike most jewelers today, de Givenchy avoids advertising and dressing celebrities for red carpet appearances. “I don’t like the commercial side of it, I wish the stars would buy their own. It’s like they are Christmas trees and you are adorning them,” he said.

Instead clients are accepted by appointment only. In working with made-to-measure, de Givenchy’s design process inevitably involves a certain symbiosis with the people he is creating for. “My clients are part of my journey, they have kind of shaped me. You don’t do this all alone; I could be asking a client a question and it sends me in a direction that opens Pandora’s box,” he said of the operation.

Sometimes, clients lead him toward an evolution. De Givenchy’s work with ceramic, for instance, has shape-shifted since he first bought a curing machine at a watch fair in Basel, Switzerland, in 2012. He’s become so advanced with the material that he’s learned to mold it like precious Play-Doh, ensconcing diamonds in ribbons of color chosen to accentuate and soften a stone’s natural grandeur. Playing back to his pursuit of wearability, the ceramic’s soft luster is more durable than enamel and can withstand extreme elements.

“I think people come to me because I am the only one — who else is doing this in New York? We offer something different, it’s a different experience altogether,” he said of his brand’s personalized nature.

It would appear that his clients develop a deep emotional attachment to their Taffin pieces — his studio calendar is packed with requests and consultations, but works rarely become available on the secondary resale market.

De Givenchy arrived in jewelry by happenstance. He moved to New York City from France in the early Eighties to become a dancer. Nagging injuries made him consider follow up careers in choreography and painting — both of which he was dissuaded from by his family, who pushed him to make money of his own. After earning a degree in graphic design from the Fashion Institute of Techonolgy, de Givenchy set out on a string of entry jobs until he landed at Christie’s — where he was ultimately placed in the jewelry department and quickly rose through the ranks.

“I really never thought of jewelry, at that time I was trying to find something in art that would work.…I found I really liked jewelry and fell in love with the stones, learning about the GIA and diamonds,” he said.

His famous uncle honed de Givenchy’s focus away from stones and toward composition and design. He began creating initial samples in Los Angeles while stationed there as the head of Christie’s West Coast jewelry department. Slowly, that turned into the quiet enterprise that Taffin is today.

Luxury fashion brands are hot on the heels of fine jewelry. Just last week, Céline revealed it had jumped into the fine jewelry arena with a line of gold pieces etched with its original logo design. “They are obviously gong to try to expand in any direction they can,” he said.

But on the grounds of made-to-order, de Givenchy feels that these larger, profit-driven brands, “can’t afford to do what I do — it doesn’t make money. We [as a company] exist, this is not a money-making venture. You work to live, and I make a good living but I never did this to make money. All the money goes to my salary and paying employees and a little vacation at times,” de Givenchy said.

While the jeweler maintains that he has not been approached by a bigger conglomerate looking to buy into the business, he has considered different succession plans. More actively, however, he appears to muse on his legacy.

De Givenchy cites early-20th-century jewelers René Boivin, sometimes referred to as the “jeweler of the intelligentsia,” and his disciple Suzanne Belperron as his biggest influences. “If anything I would want to be the Belperron of my time,” de Givenchy said.

Full well knowing the discreet nature of his company, de Givenchy said, “In time, I think we will hopefully talk about Taffin in 50 years. There is always a part of one’s self that wants to have influence over a period. I think it’s important to be recognized for that. I think I’m never taking myself too seriously when it comes to jewelry. When people use the word genius, it’s not brain surgery, it’s a sensibility to a certain thing — it’s an art.”