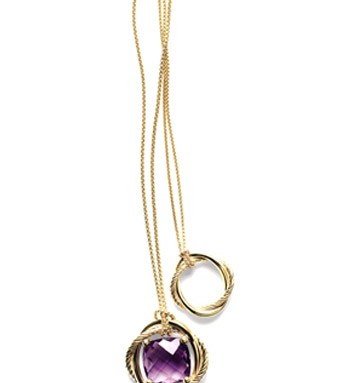 The bubble that has insulated high-price baubles seems to be deflating.

High-flying jewelers have turned apprehensive. They report that while traffic in the stores is still heavy, there is more browsing going on than buying. One retail executive called the mantra of the season “just looking.”

Powerhouses such as Compagnie Financière Richemont SA — parent of mainstays such as Cartier and Van Cleef & Arpels — and Bulgari SpA are seeing a falloff. Richemont’s sales increased 1.6 percent in October, but declined 2 percent at constant exchange rates. Bulgari issued a profit warning on Thursday after the Italian company’s third-quarter earnings dropped 43.7 percent. Both firms cited softness in the Americas, Japan and parts of Europe.

“Today we are paying for two things: a real problem and a psychological problem,” said Bulgari chief executive officer Francesco Trapani. “I hope that by the end of 2009, perhaps only because expectations will have improved by then, things go better.”

Firms are employing varied strategies to keep afloat and gain market share, executing costly plans at what are clearly tenuous times. Last month, French jeweler Mauboussin took a bow in the U.S. by opening a 6,000-square-foot boutique on Madison Avenue, accompanied by an aggressive advertising campaign with full-page, four-color ads in The New York Times and the New York Post. Fred Leighton opened a lavish Beverly Hills store this month and introduced its first four-color ad campaign and a newly designed Web site. On Thursday, Graff celebrated the opening of its new 4,000-square-foot Madison Avenue flagship.

“Between the panic attacks and the euphoria, I’m taking deep breaths,” said Lane of opening a store in this economic climate. “Am I concerned? I would be an ostrich with my head in the sand if [the economy] wasn’t in my thoughts.”

Lane remarked that his customers have pulled back a bit. They are now ordering 3- to 6-carat diamond engagement rings, whereas the average engagement stone he had been selling was much larger.

However, many firms are bucking the tide with different moves, trying to boost consumer confidence, brand awareness and gain market share.

“Demand and traffic have declined,” admitted David Yurman ceo Paul Blum. “The customer has been distracted by various things — Wall Street imploding, politics and world issues. It’s been difficult for the customer to think of shopping as a priority.”

To boost sales, Yurman has increased marketing events like trunk shows. The firm is also reaching out to customers for direct selling, while the brand’s new fragrance has helped lure consumers into stores.

“We call customers to come in and try our new fragrance and invariably, the conversation comes to jewelry,” said Blum.

Gift items such as pendants and silver rings with diamond detail and bridal jewelry have been selling at Yurman.

Emmanuel Perrin, president and ceo of Van Cleef & Arpels, North America, is bent on gaining market share by opening five U.S. stores within the next 15 to 18 months and expanding distribution with Neiman Marcus Inc., with which it currently has select distribution.

“I’m confident that we will gain market share in the U.S., for sure,” said Perrin. “I’m not looking forward to the storm, but we might as well make the best of it.”

Van Cleef & Arpels will go forth with the events it has planned for its 70th anniversary in 2009. The brand will also launch a high jewelry collection called “Les Jardins” next month, with prices starting at $300,000.

Chopard’s president and ceo in the U.S., Marc Hruschka, said the brand’s retail business has been spotty.

“It’s hit or miss,” he lamented, noting the Florida, California and New York stores have been doing well.

And firms from Richemont to LVMH Moët Hennessy Louis Vuitton and others have seen fine watch sales, once one of the market’s engines, stall of late.

“We’ve seen slower traffic and a [decline in sales], but we’re up against numbers that were huge for the last five years,” said Andrew Block, vice president of Tourneau Inc. “If you average out the last five years, including this one, we’re great, very healthy and happy considering the economic climate.”

Block said business is up in Dallas, San Diego, Boston and New York, but that one flailing region — to the lament of so many luxury brands — is Las Vegas.

Some executives said the challenges lie in their wholesale divisions, with retailers holding off on placing orders and sometimes payments. The system is frozen in place, executives said, with retailers wary of ordering more inventory given the ongoing turmoil in global stock markets and decline of the wealthy’s investment portfolios as a result.

“Every retailer is putting every brand except one or two on hold,” said one prominent jewelry executive, who requested anonymity. “The retailers are afraid to spend the money.”

One shining light is silver jewelry lines. Robert Lee Morris, Stephen Webster and John Hardy have all reported that their silver collections are maintaining their momentum.

“Fine jewelry is the one category we’ve seen be resilient in periods like this,” said Robert Burke, who has a namesake consultancy. “Consumer desire is still there.”

Trapani believes the desire for luxury goods has not died off entirely.

“I’m quite optimistic that the world is not going to end and that there will continue to be very many people interested in luxury consumption both in terms of products and services,” he said. “We find ourselves in a sector that is fundamentally healthy and normally suffers in lean times, in moments of crisis, but that suffers less than other sectors, where bigger catastrophes are more evident.”

Yurman’s Blum said, “In challenging times, people want to feel better and more wealthy, even though they might not be,” acknowledging that times have been better.

Giovanni Mattera, vice president of de Grisogono, said high-ticket items continue to be a draw. Earlier this month, the company had an inquiry about an $80,000 watch.

“Overall, the political and financial situation has brought more awareness, looking out more on what they spend,” said Mattera. “But overall, the people that we target have money and are still buying.…maybe they won’t show off, but they still want to buy.”

Others disagree. Andrew Jassin, managing director of consulting firm Jassin-O’Rourke Group, said, “The luxury business is very soft. You see consumer-oriented sales because retailers are liquidating inventory. There are far more brands than ever before and each has more offerings. There’s so much product on the market, that’s one of the issues.”

Still others continue to see only the bright side of the market. “I personally feel very fortunate to be in this business at this time,” Blum said. “It must be challenging to be in the fashion category right now. Jewelry is an easier story to tell.”