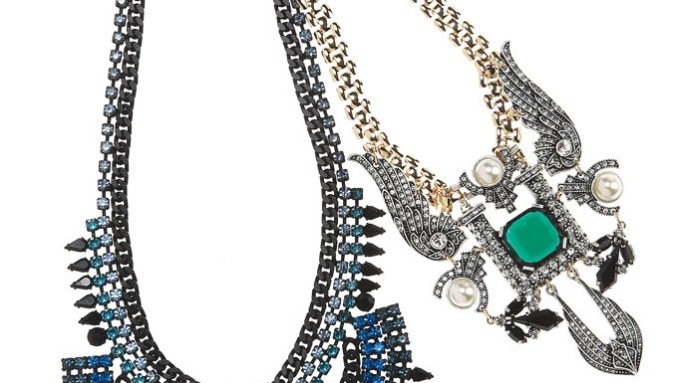 The statement necklace is growing up.

As statement jewelry market sees a turn to more delicate, personal pieces, designers are taking a more mature approach to the best-selling item. “We have shifted into more of a streamlined look,” said Dana Lorenz, designer of Fenton/Fallon. “The statement has really moved into the uniqueness of the piece.”

Excessive adornment and a full rainbow of colors are being traded for sculptural designs and mixed metals. For many designers, the statement now lies more in the artistry — and often, in the restraint of the necklace’s craftsmanship. “What we’re talking about [with the statement necklace] is a better designed, more elaborate style,” said Gerard Yosca.

He cited a saturation of lower-end, inexpensive iterations of the statement necklace as motivation to advance his designs. “When you get these necklaces that look like $5, that kind of makes them all look a little different,” he said. “In a way, they’ve gotten a little cheap-looking. The statement necklace started high-end and it’s kind of sunk down, so now, things are becoming simpler.”

Materials have remained the same for Yosca (glass, semiprecious stones, touches of enamel), but the overall aesthetic has shifted. “They are still elaborate and thoughtfully designed, but the scale is coming down, so you have an impressive piece of jewelry that doesn’t scream,” said Yosca. “We’re making necklaces that look a little more real and a little less fantasy.”

“As a brand, we’re evolving from season to season,” said Eddie Borgo, citing his recent necklace stories as “impactful in volume.”

Several described statement necklaces as the physical mood board for any given season, with the return to a simpler-style necklace reflecting upon the collection as a whole. “My feeling is that it’s always a really important way to have a cornerstone for a story,” said Giles & Brother’s Philip Crangi. “I always go to a statement necklace for that because it really has so much impact. From a design standpoint, it remains a really important part of how I build the collection.”

Jodie and Danielle Snyder of Dannijo echoed the sentiment. The sisters admittedly have much to owe to the statement necklace: A little more than five years ago, they introduced their signature bib style, resulting in a devoted following and a catchphrase: “Put a bib on it.”

“The necklace is our bread and butter,” said Danielle. “It’s the best visual representation of our inspiration. The surface area tends to be bigger on a necklace. You can really showcase quite a range in terms of color and design choices.” Now entering their sixth year in business, the sisters attribute one-third of overall sales, including e-commerce and wholesale, to the necklace category. While the bib remains one of the most popular styles, the designers constantly push to move their creations forward.

“I think you can still have a statement necklace with a beautiful stone,” Jodie said. “It’s doesn’t have to be huge to be a statement. The best part about our customers is how they take the jewelry and layer it and make it their own. Not everyone wears the necklace in the same way.”

A recent trend of combining several simple pieces has transformed into a new concept of statement necklaces, wherein customers can create their own take on the look.

“What we’re seeing a lot is that people are buying pieces that are shorter and longer and then stacking them and layering together,” said Ali Galgano, founder of Charm & Chain, an e-tailer of designer fashion jewelry. “So somebody that might want to wear this huge piece gets away with wearing three or four necklaces and that’s still making a statement. Pieces layered together to make a statement is a really important concept trending in our retail.” However, while customers may be buying several units of a more delicate necklace in one visit, the larger, more detailed, larger pieces continue pull in the most revenue. “People are definitely willing to spend a lot more money for something when they know they’ll be able to wear it like they can a statement dress,” said Galgano.“That’s the allure of a statement necklace — it can be an outfit in and of itself.”

The persisting popularity of the statement necklace, and the mentality that it can single-handedly transform an outfit, has kept customers willing to cross to a higher price bracket. For costume jeweler Carolee, simple pendant necklaces start at $40 wholesale, while larger, more detailed styles run up to $295. Despite the considerable price jump, these statement pieces remain bestsellers.

“From the wholesale side, we love this trend because they do tend to be the higher price point,” said Jill Maier, vice president of design and merchandising. “It has helped [our] fashion jewelry sales in general that it has lasted as long as it has.”

Lisa Salzer, designer of Lulu Frost, concurred, reporting that statement necklaces accounted for 34 percent of all Lulu Frost sales in 2013. Additionally, Yosca stated that necklaces are “easily 50 percent” of his brand’s overall sales, while Paolo Giacomelli, half of the designing duo behind Iosselliani, said the category is consistently the Italian band’s best-selling category.

Swarovski’s creative director Nathalie Colin shared the same perspective. “People are looking for that piece that will create a statement look,” she said. “It can twist the look of a sweatshirt.”

The recent runway trends toward a more relaxed, minimalist style have only boosted buyers’ and customers’ inclination towards the pieces.

“The statement necklace is less of a trend than it is a staple that keeps evolving. If you purchased a bold gold geometric piece in the past, now is the time to update to high-shine silver, which looks very chic patterned with all the pastels and denim seen in ready-to-wear.”

Russo counted graphic, metal pieces and semiprecious bibs among the store’s most popular styles season after season. Ultimately, however, the most important aspect that customer’s are looking for is something “unique.”

“What’s fun about [a statement necklace] is that there is no rules,” said Tara Malkovich, creative director of costume jewelry studio Sequin New York. “There’s such a vast landscape. It’s a moment for more innovative costume jewelry.”

Pamela Love summed it up: “Statement necklaces will always have a place in fashion and jewelry. My love is making statement pieces. That’s what I do.”