Tiffany &. Co's upcoming necklace will be unveiled at its flagship reopening next year and is expected to be priced in the eight-figure range.

A sketch of Tiffany's forthcoming necklace with the 80-carat flawless diamond that it will include.

Tiffany & Co. is planning the most expensive piece of jewelry it’s ever offered for sale. The jeweler recently acquired an 80-carat, oval shape, D color and internally flawless diamond, and will set it within a necklace inspired by a design Tiffany had originally made for the 1939 World’s Fair. The finished necklace, now in development, will be showcased next year when Tiffany & Co. unveils its fully renovated flagship in New York City.

Tiffany chief artistic officer Reed Krakoff said that the jeweler acquired this particular stone because “Tiffany is always looking for the most extraordinary stones available on the market. When something becomes available, it’s something we talk about and how we can present it in a way that’s special and unique, speaking to the heritage, history and artistry of Tiffany.”

A Tiffany & Co. spokesperson declined to comment on what the company paid for the diamond and what the price of the necklace will be, but noted that it will safely hit within the eight-figure range. The diamond was mined in Botswana, under conditions adhering to Tiffany’s strict sustainability and humane criteria, was cut and polished in Israel and will be set in New York City. Tiffany is still plotting out the necklace and it remains unclear how many total diamonds will be incorporated into the final design.

Speaking to the rarity of such a large, internally flawless stone, Natural Diamond Council chief executive officer David Kellie said: “This is an extraordinary find. The number of gem-quality diamonds over five carats recovered on Earth in one year is very small. The incredible 80-carat size combined with its D and internally flawless grade make this particular diamond a true miracle of nature and among the rarest diamonds ever discovered. Not only are diamonds one of nature’s most incredible creations, they are integral for the people and economies of the countries where they are found. The sale of this diamond and all diamonds discovered in Botswana directly benefit the people and communities there, including implementing infrastructure and a free schooling system.”

When the 1939 World’s Fair was held in Flushing Meadows-Corona Park in New York City’s borough of Queens, Tiffany set up an extravagant display of new jewelry expressly designed in the American Art Deco aesthetic on which Tiffany grew its name. At the time, the necklace that Krakoff was inspired by was set with a 200-carat aquamarine stone, 429 diamonds and it was priced at $28,000 (or about $524,000 by today’s value). 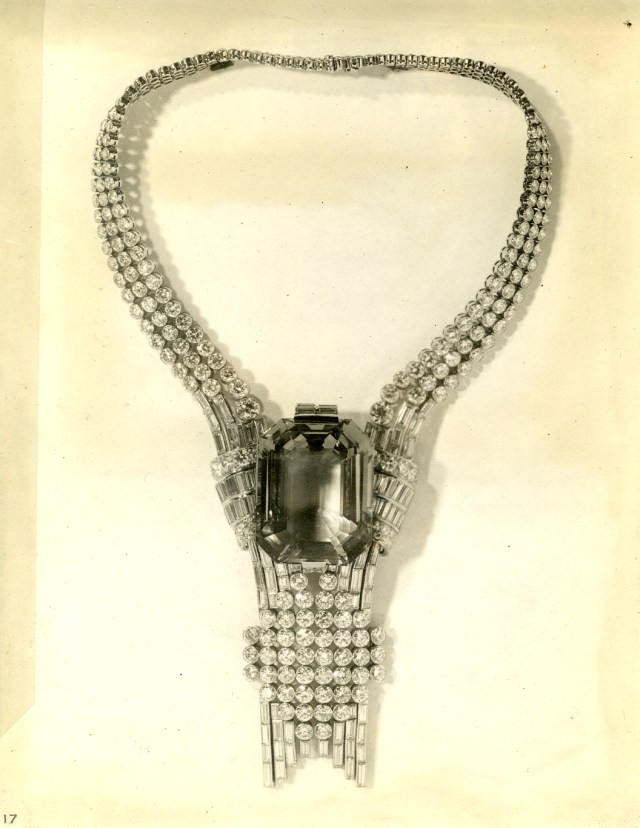 For Krakoff, this archival design’s appeal was plentiful. It was revealed as part of the World’s Fair in order to mark the opening of Tiffany’s flagship on 57th Street and Fifth Avenue — much like how this new necklace will be revealed upon that same building’s reopening following a lengthy renovation. Tiffany’s flagship renovation is expected to be completed in spring 2022.

“There are many amazing historic designs and we are always looking into how we can reinvent and bring them back to customers that were not aware of them. The 1939 World’s Fair necklace felt like it would work well with this extraordinary scale of stone — it would feel like it belonged as opposed to forcing a vintage design that wouldn’t necessarily complement it,” Krakoff said.

The following New York World’s Fair was held in 1964 in the same location. Some of the Philip Johnson-designed, futuristic structures from that event still stand, now in total disrepair, in Flushing Meadows-Corona Park. The dilapidated pavilions, visible to most tourists journeying into Manhattan from JFK Airport, have been the subject of political debate in recent years — estimated to cost up to $75 million to restore, and a minimum of $14 million to tear down.

In recent times, fashion companies such as the Tod’s Group and Bulgari have pitched forward money towards the restoration of important public works. Krakoff demurred to comment if Tiffany & Co. will aid in the restoration of the World’s Fair remnants, but said, “in terms of revisiting the installation itself, we will see in the future. It’s not something we want to reveal now but there will be a comprehensive program around reimagining of this particular [necklace] design.”

Memories of the World’s Fair may be now lost on younger consumers or shoppers in markets outside of the United States, and Krakoff said that it will be important to “communicate more with imagery and seeing visuals from the fair. I think people will understand the importance and scale of what an important moment that was in design.”

While Tiffany’s forthcoming necklace will be one-of-a-kind and beyond most shoppers’ reach, Krakoff said that it’s inevitable that the Art Deco design could have an effect on the jeweler’s future commercial collections.

“Often these extraordinary projects lead to commercial ideas. I think just the fact that we discovered this design and spent time with it will absolutely influence our commercial collections — whether that’s literal or more stylistic remains to be seen,” said the designer.

The American Art Deco angle could be an important one for Tiffany as it comes under the fold of LVMH Moët Hennessy Louis Vuitton, in a $15.8 billion deal that was just approved by Tiffany shareholders last week. The deal is expected to close Thursday.

While Krakoff declined to comment if he has met with LVMH executives, it is understood that the luxury behemoth hopes to take Tiffany more upscale and expand its global reach. With a stable of jewelers already in its ranks, and plenty more European-based competitors, pushing Tiffany’s status as an American heritage jeweler steeped in Art Deco refinement could be a differentiator for the brand in a wider global market.