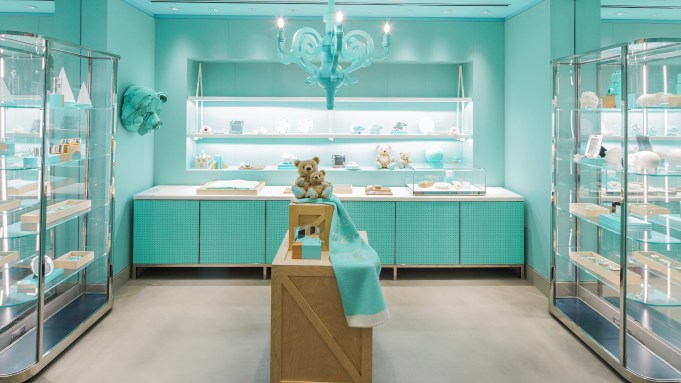 The jeweler on Monday unveiled its “Flagship Next Door,” a temporary unit that will serve as its New York City flagship as the original undergoes an extensive two-year renovation. In the wee hours overnight, valuable merchandise was transferred down the block under heavy security. Tiffany has devised elaborate scaffolding, window displays and sidewalk decals to drive foot traffic to its temporary flagship in an attempt to maintain business as usual.

The temporary flagship is located at 6 East 57 Street in what was previously a Nike store and features a lighter, more whimsical touch than what is typically seen of Tiffany stores worldwide.

With experimental floral installations, reimagined case lines and a “style studio” area to try on merchandise with vanity mirrors and jewelry stylists — Tiffany approached the four-floor temporary space as “laboratory” for new ideas in store design and merchandising techniques.

Tiffany chief artistic officer Reed Krakoff said that the location is “believable as a place to find extraordinary things but also incorporates a more updated, contemporary view on how a customer spends time in the store. We are on our way, we are just getting started.”

“It’s a more open space, it’s a more experiential space with areas to try things on and explore. The layout of the space allows us to have pop-up installations and exhibitions — things that I think are where retail is going. I think first and foremost a store today needs to be an extraordinary space, but also entertaining and engaging so it makes you want to come back,” Krakoff elaborated.

Tiffany’s visual merchandising team was faced with the task of transforming a mass-market athletic store into one that could pass for a temple of refinement and luxury. The label has kept Nike’s floor-to-ceiling atrium and has installed vertically running LED ticker-tape screens, turning it into a zone for rotating experimental features. The store boasts a 42-foot replica of the Empire State Building made from Tiffany’s signature blue boxes.

With brushed steel beams and a dramatic lattice of escalators, the infrastructure of Tiffany’s flagship location is intrinsically contemporary. Tiffany put these features to work, accentuating them with midcentury revival furniture and elaborate floral designs and greenery. Offering further textural contrast are walls are made of unvarnished blonde wood or molded concrete.

“The space is quite contemporary and the addition of organic and natural elements I think warms it up. It doesn’t feel too cool or too contemporary but has that blend,” said Krakoff.

“This store is meant as a lab for our retail network, not just the flagship. We will try things that might not have been done in an existing store because of the space and flexibility that we have here. It’s only here for two years, we have a lot of trial-and-error to experience what works well and doesn’t work and that’s really one of the hidden values of the space. We are here by necessity but it’s a huge opportunity for learning and trying unexpected things,” he said.

“It was a great opportunity to reassess our assortment and redistribute it in a way that feels fresh and new. There are 360-degree caselines where one can discover new things very differently than in the space next door,” Krakoff said. In the coming months, there will be a new installation dedicated to the forthcoming T1 collection, which Krakoff considers “the most important launch in the next 12 months.” The collection will reimagine the original Tiffany T collection that was released in the Eighties. First editions will be exclusively manufactured in rose gold.

Construction for Tiffany’s flagship renovation will begin later this week. While Krakoff is leading the flagship’s design, he was hesitant to reveal specific plans. It is unknown if LVMH Moët Hennessy Louis Vuitton will make changes to the flagship design when the firm takes ownership in mid-2020. As previously reported, LVMH reached a $16.2 billion takeover agreement with Tiffany in late November and the conglomerate’s chief executive officer Bernard Arnault toured the jeweler’s flagship the following month.