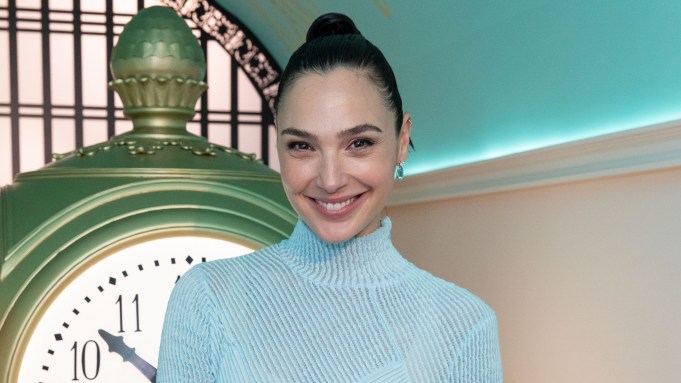 LONDON — It’s Tiffany’s world, but it would be nothing without its diamond-studded lineup of stars. On the night before its new exhibition “Vision & Virtuosity” opens at the Saatchi Gallery, the American fine jeweler transformed the second floor of the London gallery into old New York, the type you see on screen and read about in literature.

Tiffany rolled out the carpet in its signature blue for London’s brightest to swan on, from designers to A-list names such as Florence Pugh, Nicola Coughlan, Sabrina Elba and Gal Gadot, the brand’s newest ambassador.

The Carlyle Hotel’s Bemelmans Bar was recreated in one half of the dining area, accompanied by wallpaper that featured jewelry sketches from the Tiffany archive and on the other side of the room, the Grand Central Terminal Oyster Bar was brought to life through snug little seats and street art-style drawings of the friends of the house hung on the wall, including Liza Minnelli, Zoë Kravitz, Beyoncé, Lady Gaga and more.

As the guest of honor, Gadot wore a Tiffany blue dress from Givenchy with a bright rock sitting on her right hand, silver on the other and a pair of blue cuprian diamond earrings.

The Israeli actress has just wrapped up filming Marc Webb’s “Snow White,” in which she plays the Evil Queen, which she described as being “so beautifully designed and rich. Like almost avant-garde and very dramatic.”

“I love London. I love the culture and going to a pub and having a beer,” she said, emphasizing that “fish and chips and fryer is one of the things that are very English.”

For more intimate celebrations, however, like her birthday on April 30, she went to “Chiltern Firehouse with a bunch of friends for just a lovely meal.” And this weekend she’s going to be celebrating her middle daughter’s birthday with her family, which was in March but had been delayed because of COVID-19.

Gadot and her husband, Jaron Varsano, recently revealed they’re investing in edtech start-up Safe School, a personalized content streaming platform that helps to combat and reduce bullying and cyberbullying. “When I grew up, there wasn’t so much social media and the worldwide web wasn’t as complex and dominant as it is now,” she recalled.

“It’s very important that we give our children tools to be able to navigate in this world and protect them.”

The reason she teamed up with the company was after seeing “YouTube ads that started to jump on my daughter’s search for very naive things that weren’t appropriate.”

As for Thursday night’s soiree, it was dominated by Audrey Hepburn’s “Breakfast at Tiffany’s” with every guest citing it as their earliest memory of the brand.

For Sabrina Elba, her favorite memory is her engagement ring from Tiffany, revealing that she didn’t even know that her husband Idris Elba was going to propose and she hadn’t hinted at what brand of engagement ring she wanted.

The couple is working with Christian Louboutin for a second year on their “Walk a Mile in My Shoes” collection with “100 percent of the proceeds going to the organizations we pick, and it was really inspired in the middle of COVID[-19] with the George Floyd riots and that really spoke to all of us. Christian said, ‘I want to do something’ and we’re like ‘let’s do it.’ I’m really a strong believer that if you want to give back, give back what you’re passionate about.”

Pugh attended the evening event wearing British designer Emilia Wickstead, which the Duchess of Cambridge wore over the Jubilee weekend. “She always looks classic and beautiful,” said Pugh of the future queen consort’s style. The actress added that she likes to wear a lot of Wickstead because “she designs for women. It’s something that all shapes and sizes feel comfortable in.”

It seems like the whole city has caught the Tiffany blue fever — “Bridgerton” actress Nicola Coughlan whispered that her character Lady Whistledown was getting “a whole different color palette” that might not be that far off the Tiffany hue.