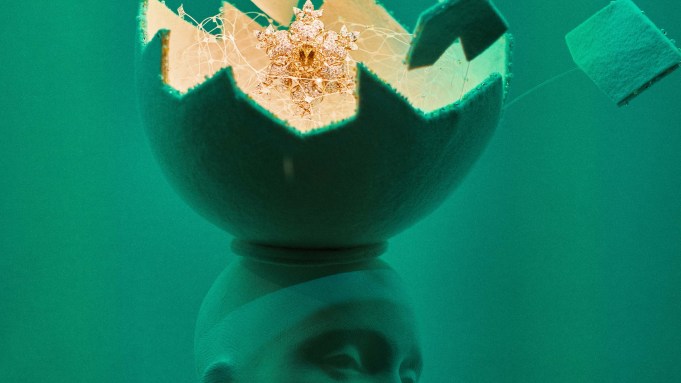 LONDON — Tiffany’s got the blues — and the oranges, emeralds and eggy yellows, too — and is showing them off in “Vision & Virtuosity,” a new brand exhibition at the Saatchi Gallery that highlights the history, creativity — and cosmopolitan mind-set — of one of America’s oldest luxury brands.

“Vision & Virtuosity” debuted in Shanghai in 2019, but this London version is a whole different show. It is bigger, brighter and richer than the original, which took place before LVMH Moët Hennessy Louis Vuitton purchased the jewelry house.

Tiffany & Co.’s president and chief executive officer Anthony Ledru described the immersive show as “going to a live concert rather than listening to the radio,” while curator Christopher Young, Tiffany’s creative director, said the London iteration is “bigger, stronger and better” thanks to a trove of new acquisitions and collaborations with the likes of Givenchy and Stephen Jones.

It features 400-plus objects, including the original Tiffany blue ring box, and takes over the vast Saatchi space. The show opens on Thursday and runs until Aug. 19. Ticket pre-sales have been robust, so there’s a chance it will run for longer.

Three times as big as the Shanghai show, the London iteration showcases 150 pieces on view in public for the first time. About 60 pieces were newly acquired for this show.

Young thought the beryl’s color resembled that of an egg yolk so, in one display, he planted the jewel inside an exploding shell of a hat by Stephen Jones, the milliner and creative director of hats for Dior.

Jones agreed. “I saw the yellow jewel, and immediately thought ‘egg,'” said the designer, adding that he grew up loving Tiffany’s windows. “When you visited New York, you went to the Empire State Building — and to see the window displays at Tiffany’s.”

Other new pieces include the Fleurage bracelet, a Schlumberger design that was acquired by Tiffany — and then immediately sold to a customer — and a sparkly butterfly suspended in a glass jar.

The theatrical, and quirky, jewelry displays at the beginning of the exhibition were inspired by Tiffany windows over the years and fizz with the brand’s humor and sense of creative adventure.

Displays in glass cases include a little blue mouse gnawing on a slice of citrine and a bejeweled dragonfly perched on Vanderbilt Gate in New York. Schlumberger’s Bird on a Rock brooch, flying over the London skyline, gets the show rolling.

It’s the first time that dazzling rock, a blue cuprian elbaite tourmaline of more than 54 carats, has been used for the gem.

Tiffany has also acquired works by Elsa Perretti, who gets her own special display, including images of Grace Jones wearing a large Bone Cuff as she smokes a cigarette; sketches of the designer’s Open Heart pendant, and a Helmut Newton portrait.

Young, who’s been buying many of the historic Tiffany & Co. pieces at auction, said that while the show is heavy on sparkle, and newness, it’s also meant to educate and to underline the impact of Tiffany & Co. on popular culture.

There’s a whole area where guests can try on diamond rings and watch a craftsman (flown over from New York) position loose diamonds in the brand’s famous six-prong setting. Visitors are able to look through his microscope and watch every step.

“It’s our duty to surprise, and we believe in a lifestyle approach: trying on a ring makes Tiffany feel all the more real,” Ledru said during an interview ahead of the show.

For fun, at the end of the show, guests can virtually try on the 128.54 Tiffany Diamond, a fancy yellow stone worn recently by Lady Gaga and Beyoncé.

While the jewels may be the stars of this show, the stones play a strong supporting role.

Tiffany’s chief gemologist, Vicky Reynolds, calls the colorful rocks in particular “miracles of nature” and said that Tiffany has a history of seeking out — and working with — stones based on their rarity and color intensity.

She said Schlumberger “played and worked with gemstones the way a painter uses paint,” adding that the blue tourmaline in Bird on a Rock was a natural way to kick off the show because of its likeness to Tiffany’s signature blue.

Fabulous as it is, this brand is also frank about the way it works: While Britain’s Crown Jewels famously live in the Tower of London, Tiffany’s historic rocks, and other objects, live in a secret storage unit in New Jersey — certainly not as glamorous, but perhaps more secure.

To wit, an entire wall of the gallery has been given over to a wide color photo of riverfront cranes and shipping containers filled with objects from the Tiffany archives, ready to set sail for the U.K.

Tiffany also plays up its influence on contemporary culture in a room that pays homage to “Breakfast at Tiffany’s.”

The dress, on loan from Givenchy, is on display in a glass case behind a replica store facade, while a life-sized yellow taxicab bursts through a side wall. There are copies of Audrey Hepburn’s script from the film and Truman Capote’s original manuscript for the novella, as well as endless images of Hepburn and the cast on the film set.

In a separate room, there is more evidence of Tiffany & Co.’s impact on past and present decades.

There are Andy Warhol’s Christmas card designs for the brand; a poster from the 1971 James Bond film “Diamonds Are Forever,” which starred Jill St. John as Tiffany Case; the Tiffany’s Pantone blue color card (number 1837), as well as recent images of Beyoncé and Jay-Z in a brand campaign earlier this year.

Young said Charles Lewis Tiffany did “branding” before branding was even a thing, with imagery and values that have remained consistent over the decades. “The Atlas clock at the store, the packaging, the idea that you could buy anything at Tiffany’s — except for the box. He was a genius,” Young said.

Tiffany’s international outlook also shines through: Charles Lewis Tiffany may have been a Connecticut native who built his business in New York City, but his company has always been in a dialogue with Europe, and the rest of the world.

In the Tiffany archives, stones mined in Montana and Maine have long glittered alongside the French crown jewels, and those that once belonged to Queen Isabella II of Spain.

Schlumberger, the jeweler’s midcentury collaborator and an LVMH favorite, was French, while Peretti was Italian and Paloma Picasso, whose designs feature in the show, is of French and Spanish descent.

The mineralogist George Frederick Kunz traveled the world looking for gemstones on behalf of Tiffany, while Louis Comfort Tiffany, the artist and first design director for Tiffany & Co., spent his career shuttling between the U.S., Europe and the Middle East for work and inspiration.

And a few decades after its founding, Tiffany was operating shops in Paris and in London.

“There was very much a global approach from early on, a great sense of curiosity about designs and beautiful gemstones from all around the world,” Ledru said.

“For me, Tiffany is a bridge between the old and the new world. It’s an American brand with a European heart, and a European accent.”

He said the exhibition is about showcasing the “heritage and the modernity” of the brand, and also its “generosity,” and open-minded approach.

He noted that as Charles Lewis Tiffany was buying and selling diamonds, and creating luxury jewels, he was also working with top-grade silver, which would later be made into trophy cups marking sports events, and major international treaties.

“We very much want to protect that spirit of generosity,” and openness, said Ledru. “We always say that when you come to Tiffany, you should be able to leave with that blue box, and the blue bag.”

Tiffany has certainly been on its own buying tear.

Asked about the company’s ambition to bulk up the archives with new acquisitions, Ledru said one of the benefits of being part of LVMH is the ability to jump on opportunities, and acquire “significant” pieces.

“We will keep buying for exhibits, but also for our own stores. We have such a rich history, and it makes total sense,” he said.

Asked about any specific pieces Tiffany might be after, Ledru said the company wants to continue buying jewels from the 1960s.

That said, many of Schlumberger’s designs from that era  — 142 to be exact — are sitting in the Mellon Collection at the Virginia Museum of Fine Arts, a gift from the late Bunny Mellon. “But I’m sure there are still some treasures out there, which we’re absolutely happy to buy,” he said.