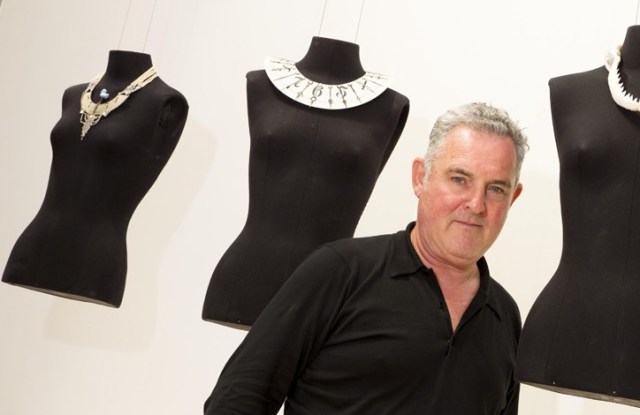 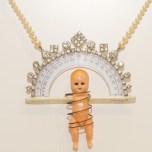 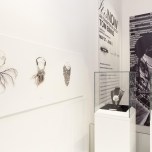 “One should never call oneself an artist. That is for other people to say,” said Binns while visiting Hong Kong earlier this month for a first-ever exhibition of his jewelry that looks, well, more like art rather than high-end accessories. “What is art but the intention of an artist? That is all this is, an intention.”

It was not Binns’ intention to have such a formal showing of this particular body of work: a batch of jewelry he assembled out of various trinkets he collected from flea markets and other places over the years. There are plastic shoes, shark teeth, coral forks and the odd miniature doll- each one pieced together to form a quirky necklace, bracelet or knick-knack and give new meaning to the term statement jewelry.

Instead it was the idea of On Pedder, Joyce and Madhouse Contemporary, a Hong Kong-based gallery. The three sides came together to convince Binns to take his creations, which he has been making for years in his Los Angeles studio, public.

“They invited me, and it was very nice of them. No one has really ever asked me before,” said Binns during an interview in the Joyce boutique on Queen’s Road where the exhibition, titled “It is Now”, capped its brief run over the weekend.

It seems that Hong Kong was an inspired choice for the show. The designer didn’t exactly hold back when it came to comparing the city to another fashion capital. “It is fantastic, you are living in the modern world. It makes New York look like a toilet, do you know what I mean? New York is like something that has been done already. This looks like something that is going to happen,” enthused the designer.

A piece titled “Flies on Shit,” features a draping crystal necklace covered in metal flies. Binns said the work relates to “having ideas and people jumping on it.”

Another creation, called “Fear Itself”, consists of a crystal necklace with a small mirror with the words “Wish you were here” written on it in white paint. A tiny hammer is mounted over of the letters. The poem contained in the piece is about “actually having a look at yourself” and having the option to “break the glass if you can’t handle it,” he explained.

“What you might find is fear itself. It’s the truth. So, it’s a good piece,” Binns said.

The second part of the exhibition is called “Sonic Sonnets” features crystal necklaces covered in thick fluorescent paint. The necklaces are housed in a dark room with black lights to showcase their luminescence. Binns said he was inspired by the colors of coral reefs and fish.

Binns indicated he has other projects in the pipeline but he was tight-lipped about what’s next. “I am not going to tell you. That’s the million dollar question,” he said. “I am just trying to advance my thing. The challenge is to go forward.”