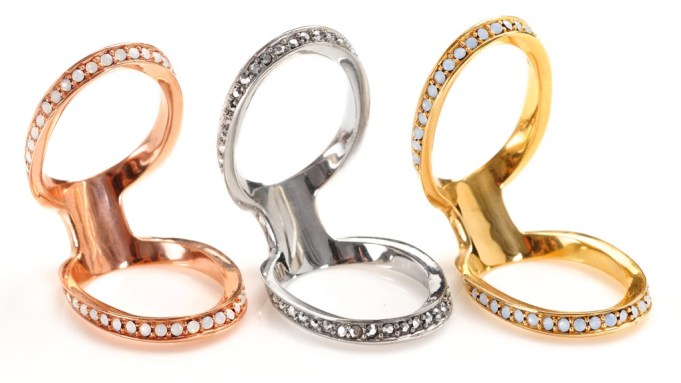 MADE HER THINK
Meredith Kahn counts Scarlett Johansson, Rihanna and Angelina Jolie as fans of her gothic-but-girly jewelry. The brand’s new holiday collection at Coeur featured pieces bejeweled with Swarovski Elements, like the Teardrop earrings for $479, while the Jaws of Life ring, in both crystal and diamond versions ranging from $173 to $759, continues to be a bestseller.

BLISS LAU
The New York-based designer known for her intricate body chains is expanding into fine and bridal jewelry, ranging from $450 to $2,500 on a custom, made-to-order basis. She showed the new $2,300 Fathom ring at Coeur, which comes apart into two separate rings but can also be worn together, symbolizing the union of a couple. For her spring collection, fine metals like yellow and rose gold and silver play a larger role throughout.

CHARLES ALBERT
Charles Albert, known for its sterling silver fashion jewelry since 1990, has launched a new category called Alchemía, a line of lower-priced pieces in a non-precious, lacquered metal (dubbed “zero-karat gold”) that simulates the appearance of 18-karat gold and retail from $30 to $750. The brand’s bullet bracelet was a highlight at AccessoriesTheShow, and comes in both Alchemía and sterling silver versions for $195 or $945, respectively.