He said, she said. And then came two new jewelry collections by Alan Brodsky and Jeeyun Kim. 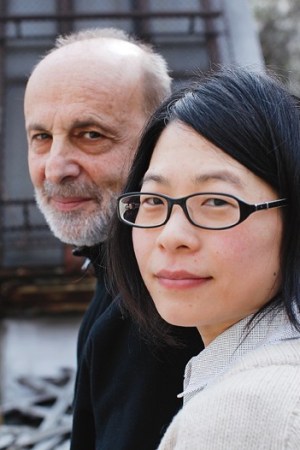 Jeeyun Kim was an assistant at New York’s China Institute in 1995 when she first met jewelry designer Alan Brodsky, who was then teaching wax modeling at Parsons The New School Of Design. The made for (Lifetime) TV hook: He was married to her boss. One year and a divorce later, they bumped into each other on Park Avenue South. “I thought she was one of my students. I couldn’t place her,” says Brodsky, 66. “Then the story goes on from there.”

Although they won’t go into details — cue Seinfeld’s “yada, yada, yada” — the two became a couple. Brodsky still teaches — now at the 92nd Street Y — and Kim, who was previously studying international relations, is the lead jewelry designer at Leviev, where she’s worked for the past six years. She has Brodsky to thank for this. He was the first to spark her initial interest in baubles, and introduced her to the company’s production manager, who went on to hire her. “I had no formal training,” says Kim, 41, who’s spent time at Liz Claiborne Inc., Jeff Kantra and Diamond in the Rough. “Alan taught me. I learned hands-on.”

Now, both are launching jewelry lines of their own: for Brodsky, an eponymous collection of whistle and knife pendants, and for Kim, a debut brand of fine jewelry, named LAV.

“I need to experiment and do something for me,” says Kim of her new venture, which is inspired by a constellation of muses, from usual suspects Jane Birkin and Charlotte Gainsbourg to the trio of women who lend their names to the LAV label. The L stands for Lily Beer-Chiavetta, a therapist friend whom Kim describes as “rock ’n’ roll chic — imagine Vivienne Westwood in her Eighties.” The A is for Anjanette Clisura, president and co-creative director of Diamond in the Rough, while the V represents Veronica Lake. “LAV is all about strong women,” she says. “Independent, stylish and unique. They’re healthy narcissists, if you want to say.”

LAV is also inspired by the Art Deco period, mining the era’s geometric lines and inclination for pearls, crystal and chalcedony. An 18-karat white gold cocktail ring, for instance, features a faceted crystal dome topped with diamonds and a South Sea pearl. The collection, which retails from $2,500 to $7,000, is all about this point-counterpoint: gobstopper crystal and chalcedony stones offset by delicate blue sapphire and black and white diamond details. Next collection, though, Kim is changing directions, introducing circus- and Fellini-inspired pieces in rich rubies and emeralds, yet still with a clean, graphic sensibility. “I’m not fussy or too girly,” she says. “I like a controlled look.”

As for Brodsky, this isn’t his first jewelry run; he designed a line of silver and acrylic pieces in the early Eighties — “modernist and very hard-edged” is how he describes them — and then a more architectural gold collection a decade later. Since then, Brodsky, a New York native, has been teaching and working the freelance circuit as a wax-model maker and, as of 2003, a CAD designer. Among his clients is the downtown-based Weapons Specialists, a prop house that supplies faux firearms and stunt kits to film and TV sets. Gigs have included HBO’s “Boardwalk Empire” (creating Twenties-era guns and license plates); “Salt” (Angelina Jolie’s detonator) and next year’s “Men in Black III” (sculpting the mountains in a snow globe). “I’m part designer and part engineer,” he remarks. “I like objects that do things. I want to make watches, cigarette lighters.”

First up, though, is his 12-piece collection of tiny silver whistle pendants ($400 each at retail), launching this summer. There are takes on Bolivian police whistles, English bobby whistles, even the tin whistles from a Cracker Jack box — all of which are completely functional. “I think the shapes are so beautiful,” says Brodsky, who plans to next cast them in gold. “In another 50 years, there won’t be any more [whistles]. Really, I’m just trying to save them and give them a more prominent place in design.”

His retractable knife collection came about after a trip he and Kim took to the Greenmarket in Union Square. “We walked by this woman who was wearing this little Forties-style knife [on a necklace],” recalls Brodsky. His versions, launching later this year at the $700 price point, will be miniscule — just a little more than an inch long — and inlaid with onyx, jade and mother-of-pearl. “I’m going to put little diamond settings on some too,” he adds.

So, will there be a collaboration in the pipeline for the couple? “I don’t think so,” responds Kim, without skipping a beat. “He likes to teach me things,” she says. “And then I tend to compete with him.”