Curated by Alba Cappellieri, who wished to “prove how the French maison fully represented the 20th century and the eternal values of beauty,” the exhibition is organized in 10 frescoed and richly decorated rooms around three main concepts: Time, Nature and Love, considered as the most representative of the brand. For example, a room is dedicated to Paris and, next to a necklace inspired by the Eiffel Tower, there is a 1945 powder case in gold, rubies, emeralds and diamonds dedicated to the Arc de Triomphe, featuring two women strolling on the Champs Élysées. Another room is dedicated to Exoticism, with a 1971 necklace inspired by India in gold, 44 engraved 18th-century emeralds and 745 diamonds that belonged to the Bégum Salimah Aga Khan. The necklace can be transformed into two bracelets and a brooch. 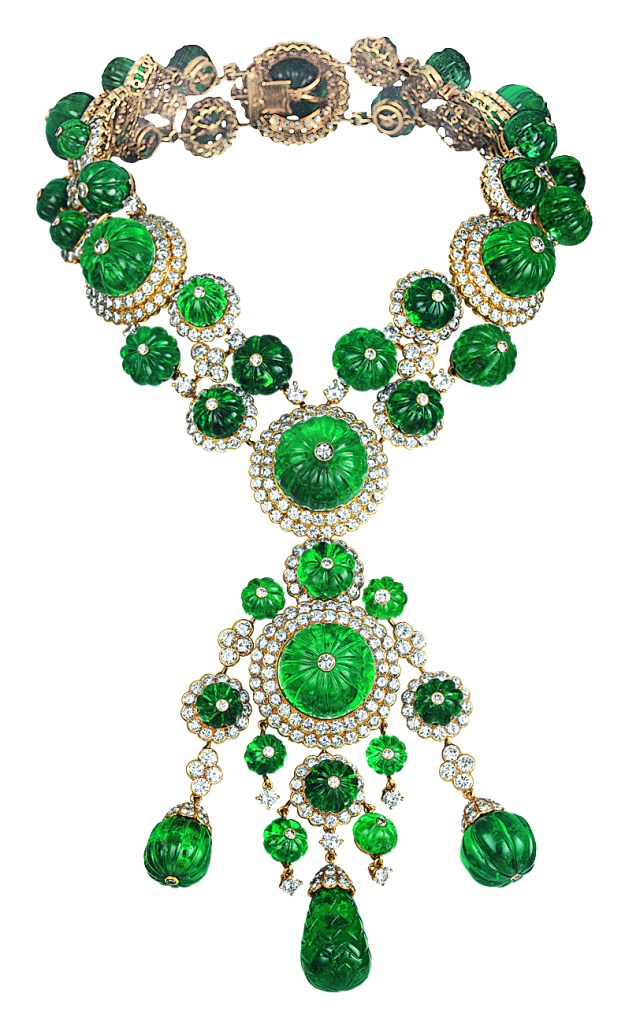 Other pieces include a 1976 tiara worn by Grace Kelly as Princess of Monaco when her daughter Caroline married Philippe Junot in 1978, and the ballerina brooches, inspired by Louis Arpels’ passion for the opera and the ballet, and the Romeo and Juliet pins representing the Love theme.

The 1951 Zip Necklace, embellished with sapphires, emeralds, rubies and diamonds, is an engineering and avant-garde feat, inspired by a zip closure, which can be transformed into a bracelet. 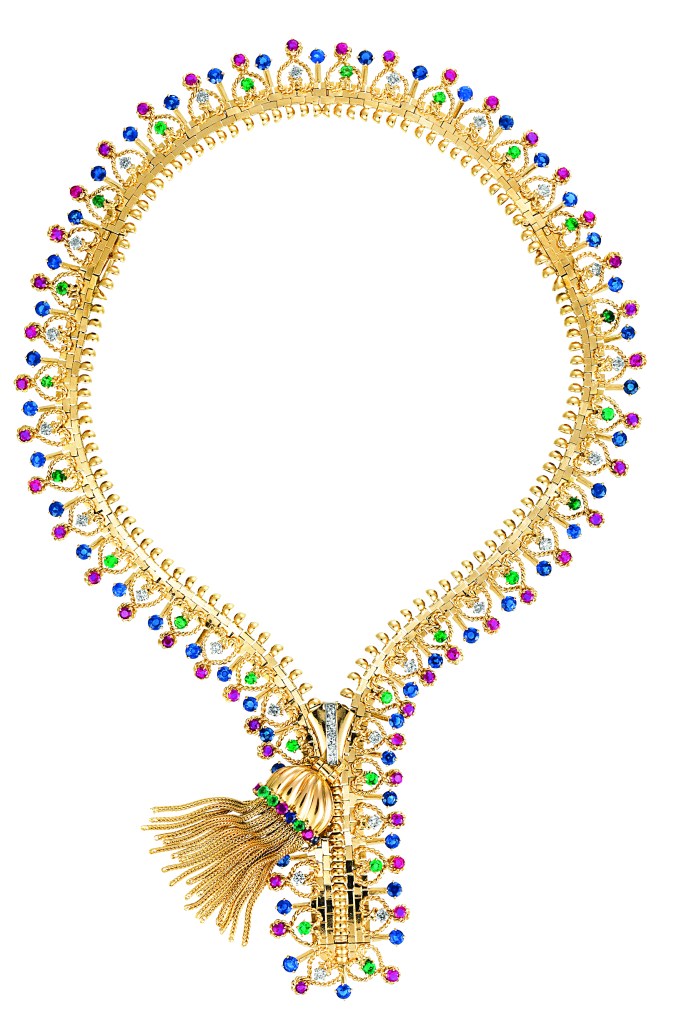 The presentation at the Royal Palace was one of the challenges, admitted Nicolas Bos, president and chief executive officer of Van Cleef & Arpels. “This was an exciting adventure. Being in Milan and in Italy was about showing the history and the style of the house, linking it with the context of Milan, which is about the history of art and culture, in a location that is one of the most interesting in the city, with its 18th-century décor and royal apartments and culture,” Bos told WWD.

At the same time, the executive said he was “extremely happy to bring another aspect of contemporary design and 21st-century creativity” to the venue. “How to balance physically the different dimensions in the space and pay tribute to the apartments, to bring that element of contemporaneity and, of course, keep the jewels as the heroes” was the issue and he praised the work done with the museum and the project conceived by American architect Johanna Grawunder, “creating a very subtle balance, using the architecture of the room, the furniture, and, very importantly, the light so that the jewels appear floating against the historical background of the palazzo with the contemporary furniture of the installation, and I believe the work done is very precise, and it gives a unique and strong personality to the exhibition,” observed the executive. 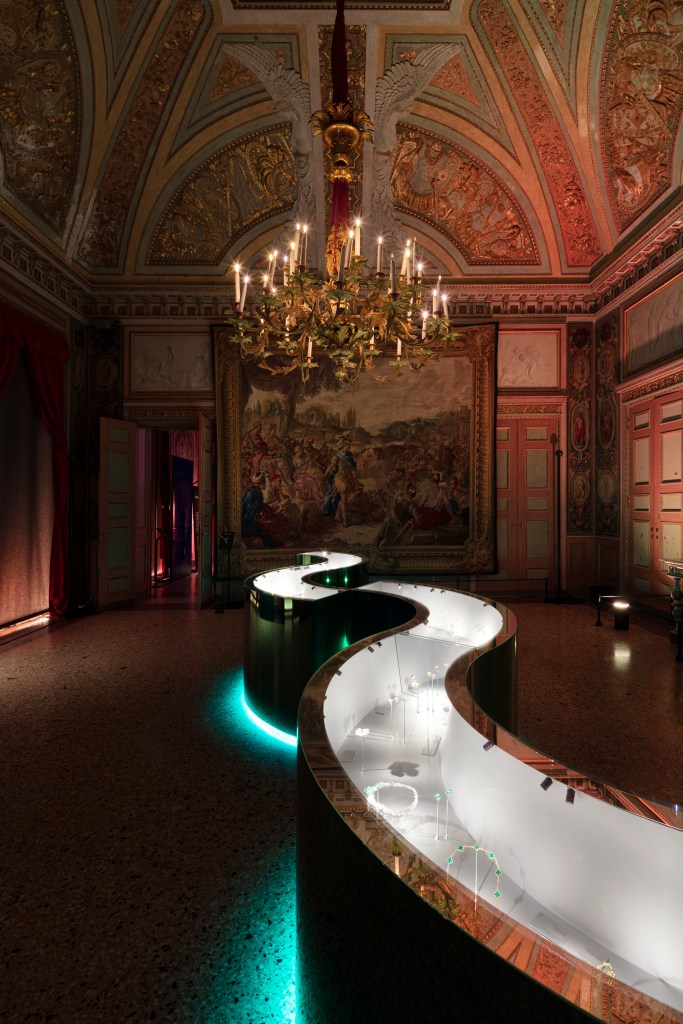 An exhibition display in the Royal Palace.  courtesy image

The exhibition runs from Nov. 30 until Feb. 20 and Bos was adamant the exhibition should be open for several months and for free, offering the opportunity to allow the jewelry to be visible and enjoyable to as many people as possible, and not only visible to experts or collectors but also families and children, or those who don’t usually associate this category with art and culture. Indeed, a “reunification of the arts,” bridging jewelry with figurative and visual arts and culture was also a priority for Bos, as well as for the museum.  “I am proud and happy to see this is a very important step in that direction,” he said, noting that the exhibition had been in the works for seven or eight years.

According to the latest Altagamma Worldwide Luxury Market Monitor by Bain & Co., jewelry maintains its traction, especially boosted by high jewelry, and is expected to show 12 percent growth in 2019. Bos was also upbeat about the category, saying “the last couple of decades have been pretty positive for luxury jewelry, and a house like ours has been growing slowly and organically, developing a balanced network presence in Europe, Italy, the U.S., Asia and the Middle East.”

Bos acknowledged that, “strangely,” Van Cleef & Arpels opened “quite late” in Italy, about 15 years ago, in a country “that has a strong tradition, culture and knowledge of jewelry, style and stones.” After opening in Milan and Rome, Bos said he sees business in Italy reflecting that of other European countries, driven by locals and international tourists. “We have been developing our position in Milan, which has been really very active in the last few years, with a lot of tourism and events, the Expo, which has brought momentum that remains, the importance of fashion and of the Salone del Mobile, when we partner with schools and institutions — economically we have benefited,” he said.

The company, which is controlled by Compagnie Financière Richemont SA, today counts 130 stores and is working on improving the quality of its venues and renovating them. That said, it has recently opened a unit in Boston and a second one in New York, at Hudson Yards, as well as two stores in China.

Online business is developing “quite nicely, operating directly in the U.S., Europe, Japan and China. It remains limited in a way, although growing  from a small base,” said Bos. “But we see it more as an additional service, to some extent pure online, but more as a combination of services, with customers associating channels, coming to the store or the other way around, trying or touching the jewelry, and the contact with our experts is still very much appreciated. Even the young, tech-savvy who would buy online, they still enjoy — we hope — a nice experience.”

While reluctant to comment about the acquisition by LVMH Moët Hennessy Louis Vuitton of Tiffany, Bos said, “Tiffany is a great historical brand, we will see what happens.” He did elaborate, though, saying:  “As long as these companies are owned by investors that understand the craftsmanship, understand the long-term vision, understand the history, that’s the most important thing. Even in large groups, you have very, very big brands and very small niche brands that manage to coexist. The great thing I see in major luxury groups, including Richemont, is that they don’t try to apply the same recipe to the brands to have them become the same, they really try to understand the identity and how they can develop the brand from that. There are several jewelry brands within Richemont, Kering and LVMH, but they all have their distinctive identities and different economic sizes. Sometimes it’s also good because buying brings resources to brands that would not necessarily have them as independent and family-owned companies. That is what Richemont will do with Buccellati [bought in September], which is not the same size as Tiffany but still in the history of jewelry is a very important brand with great style.

“Jewerly is a category that is growing, and let’s keep in mind that it’s a category where international brands continue to grow: 20, 30 years ago the jewelry market was primarily non-branded, local, regional and national jewelers around the world,” said Bos, comparing it to watches and leather goods, increasingly associated with international brands. “More and more, international customers have decided to go for international and long-established brands, most of them Western. It goes with a better understanding of the history of the style. In this sense this exhibition plays that role. It used to be more generic, buying an engagement ring, all pretty much the same,” he said, while now customers identify different brands, styles and craftsmanship.

He cited as an example the Love bracelet by Cartier, also owned by Richemont. “That’s the way the market evolves, if you have a strong identity and manage to keep it, it’s a good asset.”