Verdura Enters a Period of Expansion

Verdura, the 70-year-old jewelry firm known for its style-setting clients including Coco Chanel and Greta Garbo, is moving into a new era. 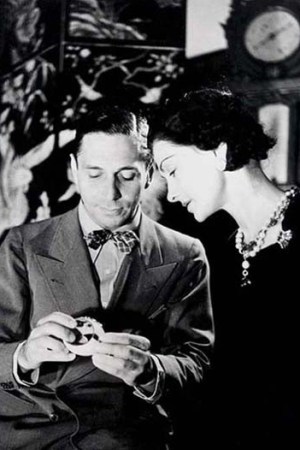 Verdura, the 70-year-old jewelry firm known for its style-setting clients of yesteryear, including Coco Chanel, Babe Paley and Greta Garbo, is moving into a new era by broadening distribution, increasing jewelry production, launching e-commerce and expanding into categories such as bridal, gifts and home.

This story first appeared in the September 21, 2009 issue of WWD. Subscribe Today.

With strategies the firm is employing now, company executives predict the brand will double sales within five years. The company declined to provide its volume, but industry experts said Verdura brings in about $18 million in annual sales.

Ward Landrigan, the firm’s chairman and chief executive officer, named his son, Nico, president earlier this month. Nico, who prior to his start at Verdura in 2003 worked at the office of the Manhattan District Attorney, succeeds Michael Heineger, who left the company nearly a year ago. The younger Landrigan, 30, has prepared for his new role by learning the ins and outs of production and operations for several years, as well as familiarizing himself with the archive of more than 10,000 illustrations done by company founder Sicilian Fulco Santostefano della Cerda, Duke of Verdura Fulco di Verdura.

“From when I was a middle teenager, hearing the stories of what Verdura was, I’ve always had a sense that it deserved a greater voice,” said Nico Landrigan. “I never want to get rid of the salon-in-the-sky type of feel…but I do get the feeling that we should be playing with the bigger boys.”

The house of Verdura is a storied one. Fond of the in-crowd, Verdura was associated with royalty and the upper crust starting in the Twenties. At one patrician event, he met Gabrielle “Coco” Chanel, who took him on as a textile designer and encouraged him to pursue a career in jewelry. In Paris, the duo uprooted the gems from the settings of jewelry given to Chanel by her various lovers and created the now iconic Maltese Cross Cuffs. The pair of white enamel cuffs is each finished with a Byzantine-inspired gold cross embedded with a celestial arrangement of sapphires, rubies and emeralds.

Verdura eventually moved to New York and opened a salon in 1939, with the financial backing of Cole Porter and Vincent Astor. He sketched thousands of pieces in gouache. Inspired by nature and having a penchant for vibrant color combinations in stones less precious than diamonds, such as aquamarines and peridots, his work was lauded for being bold, but not too precious to wear on a daily basis. He soon found fans in American society in the form of Paley, Slim Keith and Diana Vreeland who, like Chanel, became known for consistently wearing Verdura. Her favorite was a pair of gem-studded dress clips, which were sold at auction in 2004 for $191,000.

After 11 years of courting, Ward Landrigan, who was head of Sotheby’s jewelry department at the time, acquired the Verdura name and with it all of the designer’s sketches in 1985. Legend has it Landrigan — who bought the company from Joseph Alfano, a business associate of Verdura’s who purchased the company from the designer before his death — wasn’t permitted to see the sketches prior to his purchase and they came delivered in black trash bags. Verdura died in 1978.

Nico Landrigan outlined plans to increase and deepen wholesale distribution, as well as retail. Verdura has upstairs salons along Fifth Avenue and in London on Duke Street. It is also sold in Betteridge Jewelers in Palm Beach, Fla., and Greenwich, Conn., as well as three Neiman Marcus doors and Bergdorf Goodman. The average price point at wholesale is $12,000 and retail prices start at $3,500 and climb “as high as you can count,” according to Landrigan.

Over the past year, he has upped the number of new styles produced to 40 to attract a younger consumer interested in more edgy items.

For instance, he brought back the Herkimer diamond pendant earring design. Herkimer Diamonds, the doubly ended quartz crystals found in Herkimer County in New York, aren’t nearly as costly as a precious gemstone, but they have a big look and are rare to find in the size Verdura is using. Landrigan, who earlier this year proposed to his fiancée with a Verdura ring, is also growing the company’s bridal selection to compete with the likes of Cartier, Harry Winston and Van Cleef & Arpels.

The firm has also expanded into objets d’art such as elaborately jeweled hard stone table lamps that Verdura sketched, as well as gift items such as clocks, silver hollowware and paper weights. The opening price point for silver is $200 and clocks start at $300. Verdura products are made in Italy, Paris and New York.

In 2010, the company will begin to sell its goods on a soon-to-be redesigned verdura.com Web site.

An integral part of the firm’s 70th anniversary and growth spurt goes back to Verdura’s association with Chanel. For the first time, Verdura has re-created the Maltese Cross Cuffs. The limited series of 70 gold, enamel and gem-laden cuffs will retail for $65,000 each.

Ward Landrigan acquired the original pair at auction in 2007 from a woman who requested anonymity and on the stipulation that he not reproduce them until she died.

The cuffs are included in the 2009 Verdura collection, which is inspired by its muses and clients such as Garbo, Paley, Peggy Guggenheim and Linda Porter.

The high-society element of the business is one to which the Landrigans continue to cling, naming Carolina Herrera and Sarah Jessica Parker as among the clients of the brand.

“It wasn’t a company, it was like a club,” said Ward Landrigan of Verdura decades ago. “You can’t run a business like that in today’s world. It was all very exclusive.”

Landrigan said to identify his target demographic for Verdura, “all you have to do is look at Bill Cunningham’s pages in the Sunday [New York] Times,” referring to photos of society parties.